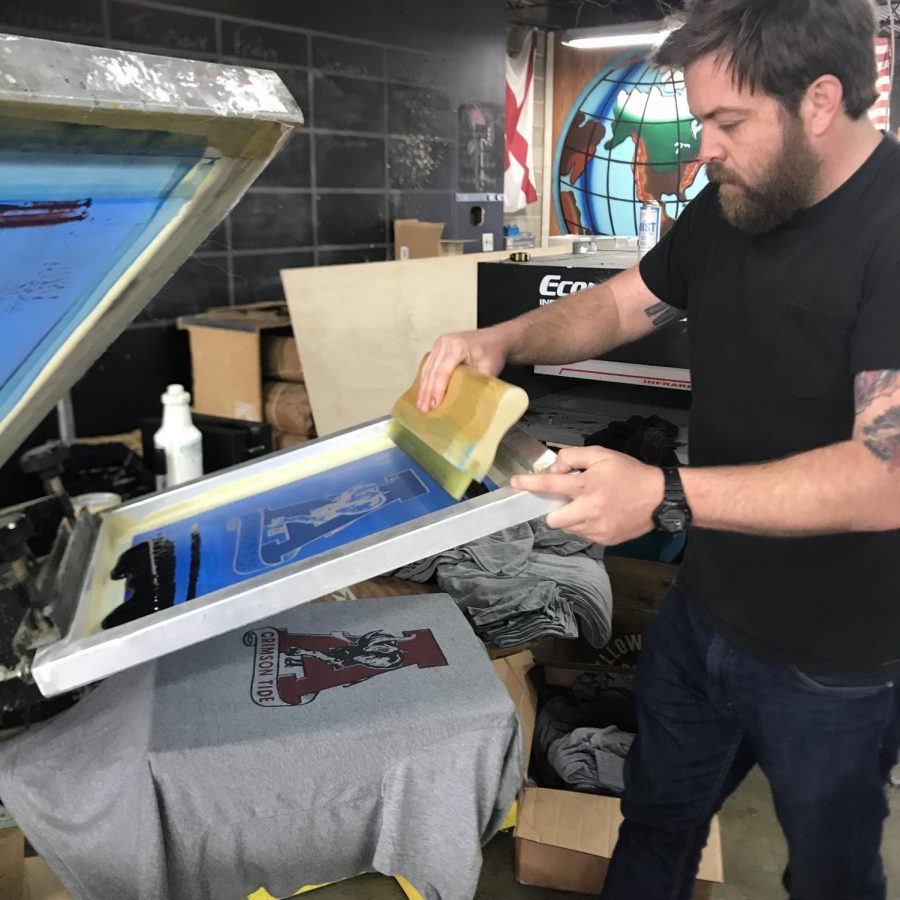 On the south side of Birmingham sits a nondescript office building with a brand new tenant. Out back on the loading dock, boxes emblazoned with T-shirt brand names wait to be carried inside. Their owners are Brandon Watkins and Brett Forsyth, the graphic design duo behind Yellowhammer Creative, a poster-making, T-shirt-designing, pennant-selling retailer that has become a staple in the closets of the Birmingham cool crowd.

Yellowhammer Creative’s new home, within ear-ringing distance of the bells at St. George Melkite Greek Catholic Church, has been 10 years in the making.

“We met and we just wanted to do some art together and we realized that we both loved gig posters and show posters, so we just started doing that,” Watkins said.

The pair started their business in 2008, creating posters for Birmingham music venues and teaching themselves how to screenprint for three years. Through a partnership with REV Birmingham, Yellowhammer made its foray into retail in 2013, showing up at various pop-up markets and catching eyes with its fan favorite “It’s Nice to Have You in Birmingham” T-shirts and posters.

“Those shops were super successful, and we got some money to quit our day jobs and go in full time at that point,” Forsyth said.

Forsyth and Watkins have been at it full time ever since, working out of an older space in Avondale, tucked behind the popular 41st Street South collection of bars and restaurants.

With a retail stall at the Pizitz Food Hall and a move across town, Forsyth and Watkins now have the room to expand their work – which means the chance to try on a project they’ve been thinking about for years.

“We kind of threw it out there, this idea that we’ve probably had for eight or 10 years,” Forsyth said. “If someone just made really cool Alabama s***, that would be really awesome.”

And so the team’s Bama Market imprint was launched. The line of apparel and art prints takes inspiration from decades of vintage Alabama fan gear, which Forsyth and Watkins have been perusing at The University of Alabama’s Paul W. Bryant Museum.

“We’ve got everything else covered, as far as putting a script A on anything and everything you could ever want,” Forsyth said. “We love old vintage and found things, and we’re lifelong, hardcore Alabama fans, so we knew that there are folks like us who wanted something a little different.”

That philosophy has worked out well for Yellowhammer’s Birmingham souvenir-like apparel and hand-lettered, small-batch Dead Eye Goods line, and with decades of UA fandom history to pull from, Bama Market’s possibilities seem endless.

“I think using vintage T-shirts to make new designs is a great idea,” Leah Sneddon, a senior majoring in apparel design, said. “Alabama has a great history and so many wonderful traditions. Paying homage to that by bringing back classic or vintage designs is very special.”

Part of bringing those classic designs back is the Crimson Tide T-Shirt Club, a T-shirt of the month fan club that will allow Forsyth and Watkins to create exclusive, limited edition T-shirts for club members. The $30-per-month subscription includes not only a T-shirt, but also a certificate and membership card officially signed by the fictional Captain Raul Tyde.

“We’re really excited now to get to work with the University and have sort of a long leash to find what’s cool and old and see how far we can take that,” Forsyth said.

The next step in the duo’s Bama Market takeover is a set of game day posters, one for each of the Crimson Tide’s home games during the 2019 season. Those posters will make their debut at Saturday’s A-Day scrimmage, where Watkins and Forsyth will be screen printing onsite.

“It’s a really cool opportunity for us to get out and show people exactly why these show posters are not your normal thing,” Forsyth said. “It’s a hand-crafted, limited edition piece that we’ll only run once.”

For the slate of fall games, they’ll be hand printing the posters ahead of time and selling them in limited batches inside the stadium. It’s a campaign that Forsyth hopes will be as successful as their runs of concert and film posters have been in Birmingham.

“If you find the right vein with those people, they get rabid and have to have it,” Forsyth said. “And we’re the same way. We’re cut from the same cloth.”

As for finding some Bama Market fashions, Watkins and Forsyth are looking forward to unveiling new shirts for their rabid “Roll Tide” fan base very soon, one of which is a favorite of Forsyth’s. Their addition to the selection of Bama fan-friendly apparel may come as a welcome expansion to students and fans looking to broaden the horizons of their game day gear.

“We all have our own individual style, which is showcased in the way we dress every day whether we may know it or not,” Alexandra Gibson, a senior studying apparel design, said. “Style is how we express ourselves. When businesses incorporate various styles into their stores, they are giving the buyer the opportunity to show their aesthetic, which is always a plus – especially when planning your next outfit for your new Instagram post.”

Where: Outside of Bryant-Denny Stadium