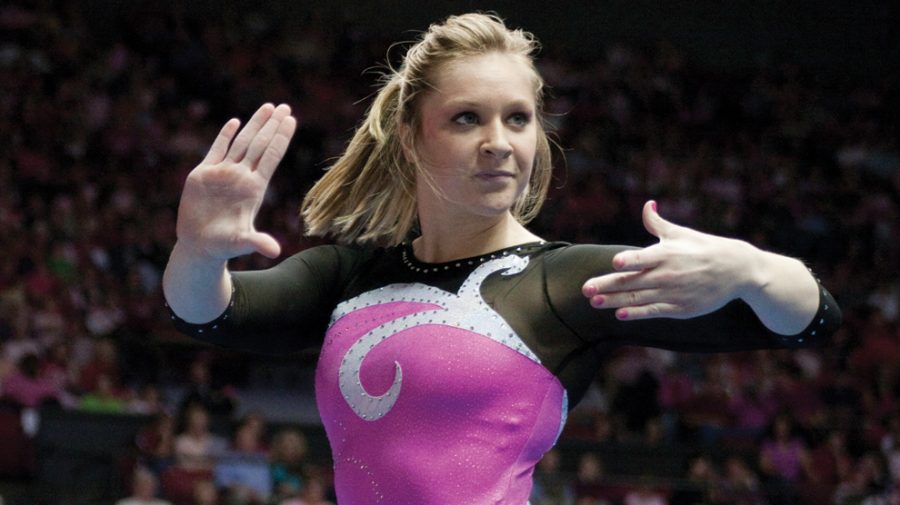 The gymnast, a junior, has always been a perfectionist, and while that mentality has helped her develop her talent, it has also occasionally prevented her from reaching her full potential.

“You want people who want excellence,” gymnastics head coach Sarah Patterson said, “but when the pursuit of excellence can deter the outcome, that’s the problem. With Geralen, if she does a bar routine and lands her dismount and takes a step, she could be disappointed in herself, where that bar routine could still score 9.875.”

Coming from an elite level of gymnastics, Stack-Eaton came to the Capstone used to performing for only herself, knowing that one tiny mistake could ruin a chance at greatness.

“If you make a mistake, and you’re in the elite level of gymnastics, that mistake can cost you a spot on the world championship team,” Patterson said.

Stack-Eaton said her entire gymnastics career was based on perfection. The slightest mistake would turn a perfect routine into a failed routine.

“If it wasn’t perfect, it wasn’t good enough,” she said. “I think that mentality has moved into college gymnastics, but I’m working hard on it to not affect me as much as it used to.

“I try to be a little more lenient on myself these days,” she said. “I’m not as negative. If you don’t enjoy the process, you’ll never enjoy doing it.”

Stack-Eaton’s role as a self-motivator hit a huge test in December. Less than a month from the start of the season, she strained her quad. She had to be slowly worked back into the lineup, and she had to accept less than her full capability in the first part of the season.

“All fall, she led our team in terms of being the first one ready to go, adding new skills, just grazing her level,” Patterson said. “It took a little bit of spark out of her. I think each week it’s been getting better and better, but it wasn’t until [the Kentucky meet] that she finally felt confident.”

Feb. 18, the meet at which Alabama scored a season-high score to beat Kentucky, was Stack-Eaton’s night. She scored career-highs in three events on her way to a career-high 39.675 in the all around. It was the highest score for any gymnast in the country this season, and it may have been the first meet of her collegiate career that Stack-Eaton has not been upset about a mistake she made.

“I was so proud of her,” teammate Rachel Terry said. “To see the confidence that she had, and just the smile that she had on her face after every event. She’s one of the people who can pick out something wrong with everything she does, but [against Kentucky], she did not show that.”

Patterson said, “I was just waiting for a performance like that. I didn’t even add her scores up. I just knew she was doing a great job on every event.”

Stack-Eaton followed up that performance with an almost identical 39.65 at Georgia last week. If she wanted to pick out a mistake in her last two performances, she would have a tough time finding it.

If there was one, however, it appears Stack-Eaton simply chose to ignore it.