Baseball loses game one against Arkansas 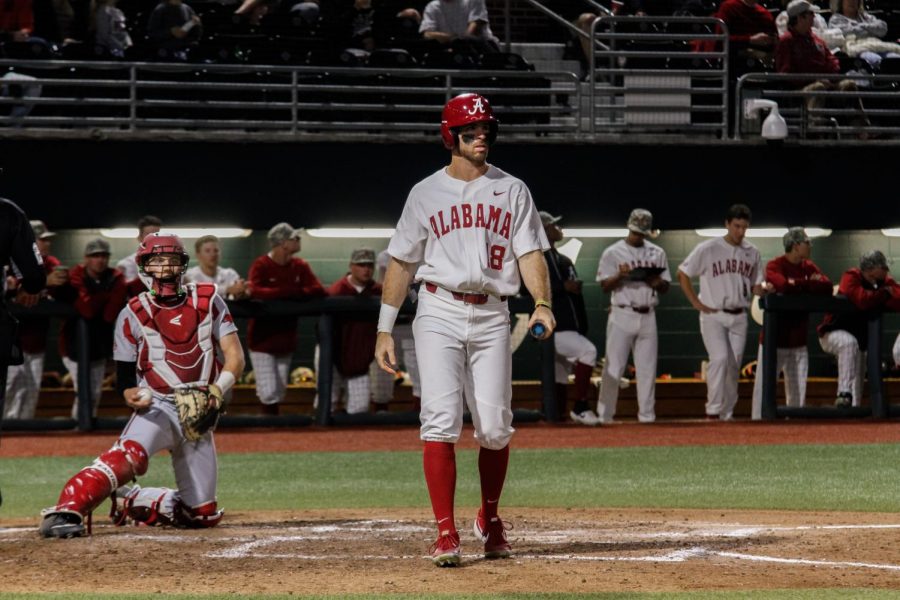 Like in most of Alabama baseball’s games this year, most of the runs were scored in the first couple innings. The only difference, Arkansas scored all the runs, leading to a 12-3 win.

The Razorbacks started the onslaught in the first inning, coming off the bat of the reigning SEC Freshman of the Year. Right fielder Heston Kjerstad battled against Alabama’s ace Sam Finnerty for 10 pitches before sending 2-2 pitch into the right-field student section for his fourth home run of the year.

The second inning is where Arkansas did most of its damage.

After getting a flyout to center, Finnerty allowed back-to-back singles. He forced a flyout to right field, which advanced the leading runner to third. With two outs, Christian Franklin singled to center, scoring a run.

Overall, Arkansas scored six runs in the second and added one in the third off a double by freshman Jacob Nesbit.

The Razorbacks added a pair of runs in the eighth. Nesbit launched his first career home run into the Alabama bullpen, scoring the runner at first.

The last Arkansas runs crossed the plate in the top of the ninth, which once again came by way of the home run. Center fielder Dominic Fletcher sent a ball into the student section for his third home run of the year. The last run scored when Jack Kenley singled to right field, scoring the runner from second. The runner who was on first was thrown out at third.

Finnerty struggled against the Razorbacks. He went just four innings and allowed eight runs (seven earned) off nine hits. Coming into the game, the senior had allowed just seven runs in his five games.

“Casey did a great job,” coach Brad Bohannon said. “[Finnerty] was able to battle and give us the fourth inning, and Casey did a good job settling the game. I told the kids, it was a real positive that Casey Cobb was able to locate his fastball and throw some good changeups.”

Overall, the trio combined for 14 strikeouts.

It managed to collect seven hits, five of which were spread across the first seven innings.

The Crimson Tide scored all three of its runs in the ninth inning. After a strikeout, freshman TJ Reeves drew a walk. He advanced on a John Trousdale single. After a walk to load the bases, Kolby Robinson grounded to second but beat out the chance of a double play, which scored a run.

Alabama added a run on a wild pitch then Johnny Hawk doubled down the left-field line, scoring the last run of the game.

Trousdale was the only player to finish with multiple hits, finishing 2-for-4.

Keith Holcombe, who came into the game with a 36 on-base streak dating back to last season, failed to reach base. He finished 0-for-3 with a pair of strikeouts.