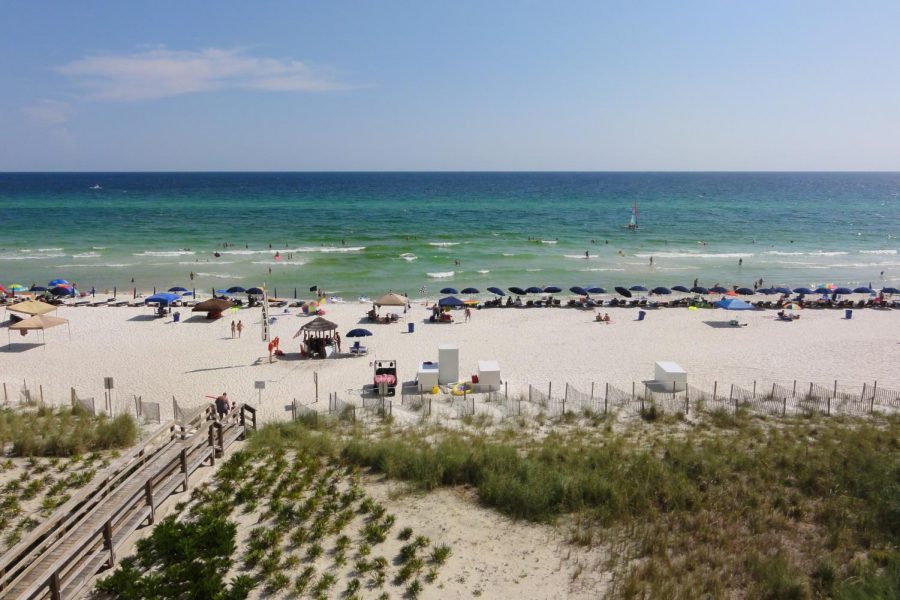 Late one evening, J. Elizabeth Williams was feeling frustrated. So she took to the Alabama Student Ticket Exchange Facebook page.

“Anyone that is planning to go to Panama City Beach for spring,” Williams wrote. “I ask you to hear me out.”

Williams, a freshman studying journalism and creative media, was concerned that an influx of tourists to Panama City Beach (PCB) would displace locals living in motels after Hurricane Michael. PCB, Williams said, just needs more time to rebuild after such a catastrophic loss.

When Hurricane Michael made landfall in October 2018, it was the first Category 4 storm known to hit the Florida Panhandle. Its 155-mph winds and 14-foot water levels caused an estimated $8 billion in insured damages, according to the Associated Press. The death toll rose into the 40s.

“What led me to post is that so many of my classmates were talking about heading to PCB,” Williams said. “However, so many do not understand that Hurricane Michael was just a few months ago, and even though a lot of businesses are back, the locals are not. There are still several local families that still need time so that by the summer, they can be back home.”

To Williams’ point, in February, the Bay County Tourist Development Council found the amount of taxes collected from tourist housing accomodations had more than doubled from the previous year in December 2018. That increase indicated many displaced locals, visiting contractors and other recovery agents were staying in hotels throughout the county, according to the Panama City News Herald.

Delaney Murphy, a freshman majoring in social work, believes it might be beneficial to visit PCB and stimulate the economy – as long as guests stay respectful.

“I think it’s definitely important to respect the people and beaches of PCB and to remember that they are still trying to rebuild it,” Murphy said. “Revenue and visiting PCB can also help with that rebuilding, and certainly don’t go and trash their city and beaches since they are already having to put everything back together.”

Despite the potential loss of housing for those displaced residents, Destination Panama City launched an advertising campaign in December to promote the viability of the city as a tourist destination. The campaign, titled “Postcards from Panama City,” seeks to keep the PCB area relevant in the minds of future vacationers, with the website noting that the city plans to rebuild “bigger, better and stronger.”

Tourism in the PCB area may be less a nuisance and more a necessity, given the city’s economic makeup. In December 2018, non-farm employment decreased in spite of consistent year-to-year growth for seven years, said Viktoria Riiman, a socioeconomic analyst at the Center for Business and Economic Research at The University of Alabama.

“The local metro economy is heavily service-oriented, with 90 percent of all employees working in service-providing industries,” Riiman said. “Employment in retail and leisure and hospitality sectors that include restaurants and hotels is very important to the local economy and accounts for almost a third of total nonfarm employment.”

Alongside PCB’s additional bed tax on hotels and other tourist accommodations, the number of residents employed in the PCB service industry would indicate that the city’s economy relies on tourism more than any other industry.

But it isn’t just the larger economic problems that worry Williams.

Williams is not so sure that PCB offers the stereotypically desired spring break experience anymore, as she noted in her Facebook post. The city issued a ban on drinking alcohol during the month of March on the sandy beach in 2018, and that ban will continue into 2019.

Regardless of whether residents are ready, spring break will make its way to PCB next week, when free DJ sets (courtesy of the PCB Spring Break Co-op Group) entertain tourists, and Pier Park welcomes a flock of collegiate shoppers into its midst. But, as Williams said, PCB is not the only option.

“There are other amazing beaches to see,” Williams said. “Destin, Pensacola and the list goes on. Let PCB build and the locals have the condos.”