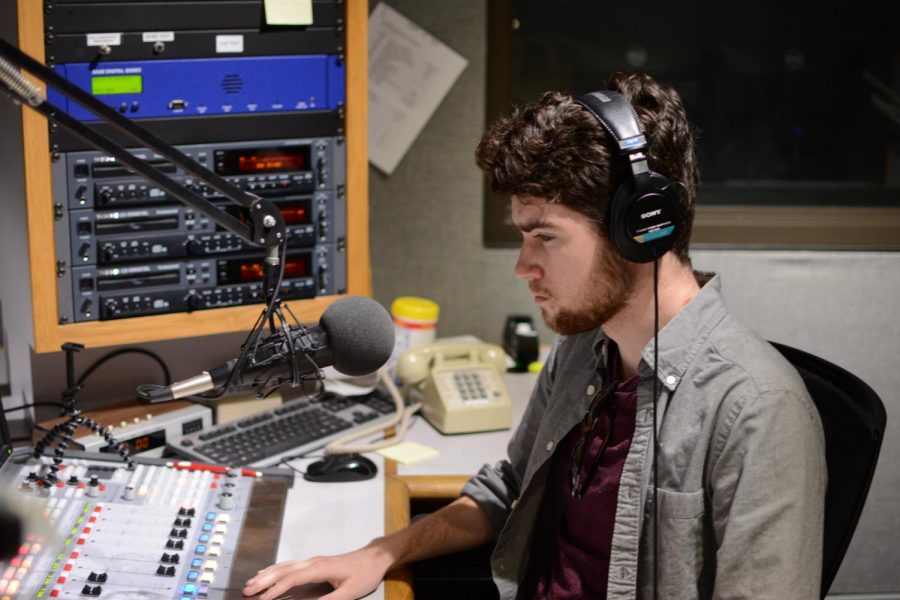 For an amateur podcaster, Jonathan Holle has a pretty professional setup. The senior studying telecommunication and film works at Alabama Public Radio, where he has access to sound-dampening recording studios stocked with microphones, monitors, speakers and mixing equipment.

Luckily, Holle said, a fully functional recording studio isn’t a requirement to start your own podcast. In fact, there are basically no requirements.

Holle is currently editing two episodes of a podcast on advertising, which he recorded with a fellow student. In the future, he looks forward to hosting a podcast with Alabama Public Radio that would examine hot-button news stories through a Shakespearean lens. The two topics have conversation in common.

So podcasting just has two ingredients: a discussion and a recording device. But that doesn’t mean the process is easy.

Boden Robertson, a doctoral student studying second language acquisition, started “The GradLings Podcast” with two friends in 2017 after realizing they needed an outlet for their shared passion: linguistics.

“We had these conversations in class, but there’s really no space, outside of talking to your advisor or talking to your professor and taking up office hours, to really nerd out and explore these things,” Robertson said.

For both Robertson and Holle, the recording process is the fun part. It’s the post-production editing that makes podcasting tough.

“When we first started, [editing] was grueling,” Robertson said. “I had never done any kind of audio editing before and I had no training.”

Robertson, who was already taking advantage of the recording equipment at the Sanford Media Center in Gorgas Library, headed back to Sanford to figure out how to pull all of their work together. Even with the Sanford team coaching him through it, editing the first podcasts took Robertson several hours, often spread over two days. Now that his learning curve is plateauing, Robertson said the work comes much more easily.

“For the last episode that we did, we went from the start of the recording to the end of the editing process in four hours,” Robertson said.

Holle, too, knows that editing a podcast means learning as you go. In recording the first two episodes of his advertising podcast, Holle set up two microphones to record together, into the same waveform, meaning that cutting one person’s laugh could result in cutting a whole sentence from the other person. It’s a mistake Holle said he doesn’t plan on making again.

Between preparing, recording and editing, podcasting can take up a large amount of a college student’s time. That’s exactly why Darcy Mack, a sophomore majoring in creative media, is taking a break from their podcast. Mack, who co-hosts a podcast that focuses on personal issues, needed a little recovery time after juggling podcast responsibilities and coursework every other week.

“We’re actually taking a break for a month or two on my show because I didn’t have the energy to work on it after I was done with class and work,” Mack said. “It’s definitely a commitment.”

WVUA radio personality Tina Turner also recognizes that running a show every week is a hefty commitment, but she also says that it’s a personal necessity. When she isn’t going to class and working 30 hours per week, Turner hosts “The College Struggle” on WVUA FM, which she said allows her to meet new people and discuss interesting topics for an hour every week.

“It’s been my favorite experience as a student, so it’s absolutely mandatory for me that I continue to make the time each week to do what makes me happy,” Turner said.

“The GradLings Podcast” has also allowed Robertson to talk with people whom he otherwise might not have met. In an upcoming episode, the “GradLings” team plans to interview a student in Germany, while other episodes have put them in contact with students in California, Ohio and Illinois, where host Robbie Turner is completing her Ph.D. program. With so many people, Robertson said, comes so many opportunities to talk about the positives and negatives of graduate student life.

“There’s a lot of things that go into graduate study, and a lot of things that aren’t talked about,” Robertson said. “Recently, issues of maintenance of mental health have been coming up… and we’re hearing more and more about people who are talking about their experience of going through depression, relationships with faculty and work-life balance.”

Those conversations have molded and expanded “The GradLings Podcast” into a more well-rounded discussion of both linguistics and graduate student life, Robertson said. While podcasts have the potential to dig deep into their subject matter, some say it’s dynamics between hosts that keep podcasters and listeners coming back for more.

“Podcasting is special in that it feels more genuine or familiar than other media,” Mack said. “When you’re listening to a podcast, it can feel like you’re just listening to your friends talk. If you make a podcast, you get to explore something you’re interested in with people you care about.”