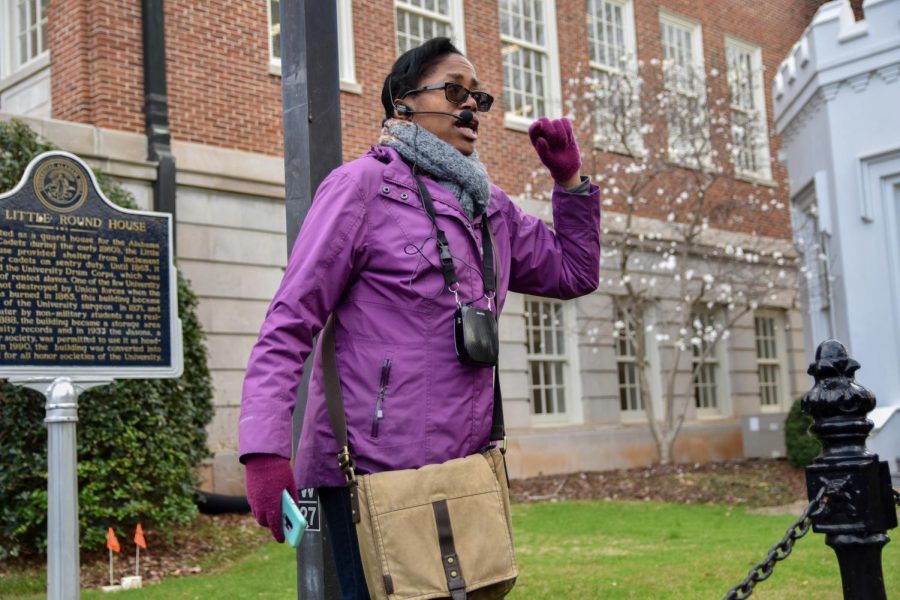 During the week, thousands of students scurry across campus going about their daily routines, seemingly unaware of the history that lies beneath their feet.

One professor has been unearthing that history and honoring those who suffered under the institution of slavery at The University of Alabama.

Shortly after Hilary Green, associate professor of history in the Department of Gender and Race Studies, began teaching at the University five years ago, she encountered a student who said slavery had never existed at the University.

“I immediately thought, ‘Okay, I’ve got to do something about this,’” Green said. “I tried to formulate a walking tour across campus but also a lecture within my courses that I would regularly teach. So, the following August, we walked the campus.”

For the past four years, Green has been guiding hundreds of visitors along a one-hour walking tour called the “Hallowed Grounds Tour,” shedding light on the experiences of enslaved people owned by the University during the 1800s.

Green’s research led her to documents from 1831 to 1865, such as bills of sale for slaves purchased by the University, student tuition bills that listed “servants” as one of the tuition fees, documents of enslaved people that received medical treatment and the diary of former UA President Basil Manly that documented the names of many enslaved people owned by the University.

From the original construction of the University until it’s destruction on April 4, 1865 by Union troops, slaves were both bought and used for much of the labor at the University. They were made to maintain the grounds, clean, cook and perform other tasks to tend to the students and the campus.

The tour begins at Gorgas House and makes stops at the Little Round House, The Mound, the President’s Mansion, Smith Hall and the slave cemetery. Tour dates can be scheduled online with a maximum of 20 people per tour group.

Along the tour, Green described the way slaves had to live, serving and cleaning up after students, carrying buckets of water from Marrs Spring to various buildings, sleeping on floors or on stoops of the dormitories they tended to as they were forbidden from sleeping in any of the rooms – some slaves even giving birth on school grounds.

During the tour, Green called out the names she found of some of the slaves who were owned by the University and asked the tourists to say their names out loud, ensuring that the names of enslaved people like Ben, Moses, Isaac, William, Neal, Crawford, Gabe, Arthur, Sabra and Lydia will be remembered by future generations.

“We represent that long legacy because we are the UA community,” Green said. “From slavery to our present diversity, we are always being informed and shaped by that past, but that doesn’t mean it will hinder our future.”

The tour ended at the slave cemetery near the Biology Building, where two University-owned slaves, Jack Rudolph and William “Boysey” Brown, and a student are buried. In 2006, a historic marker was installed near the graves, recognizing their burial and commemorating the UA Faculty Senate’s apology in 2004 for their predecessors’ role in the institution of slavery.

“One of the things that we can be proud of is that UA was a leader in having these difficult conversations and acknowledging these places as sacred sites,” Green said. “We are the first in the SEC to do this. Other schools are following us.”

Gloria McClendon, a junior majoring in African American studies, said the tour was eye opening for her, and that learning of the history of slavery on campus will give her a different perspective when walking around campus.

“Having insight on that part of the history on this campus means a lot,” McClendon said. “I was just happy to dig deeper, especially with my major, into the history of our campus itself.”

Vashton Smith, a freshman majoring in history, said learning about the University’s past with slavery adds another layer of understanding to the experiences of African-Americans on campus, including the civil rights events that would later take place here.

“It really served to illustrate how oppressed African-Americans were at a time in this school’s history and in this country where the cultural differences between blacks and whites on a southern college campus had the blacks as the help and even in some cases the sexual objects of the masters,” Smith said. “It just showed me how the racism of that time really permeated throughout the state, and how we need to keep educating people on these topics.”

By going on the tour, Green said visitors can have a greater appreciation of how far the University has come from its past with slavery to its current racially diverse campus.

“The University, in all of its complexity, has a complex past with race and memory of the African-American experience that predates the opening of the school,” Green said. “It’s not a shameful past but one that continues to inform the University. So by walking the tour and learning about the enslaved people, you’re also learning about another under-appreciated and often untold story about the school too.”