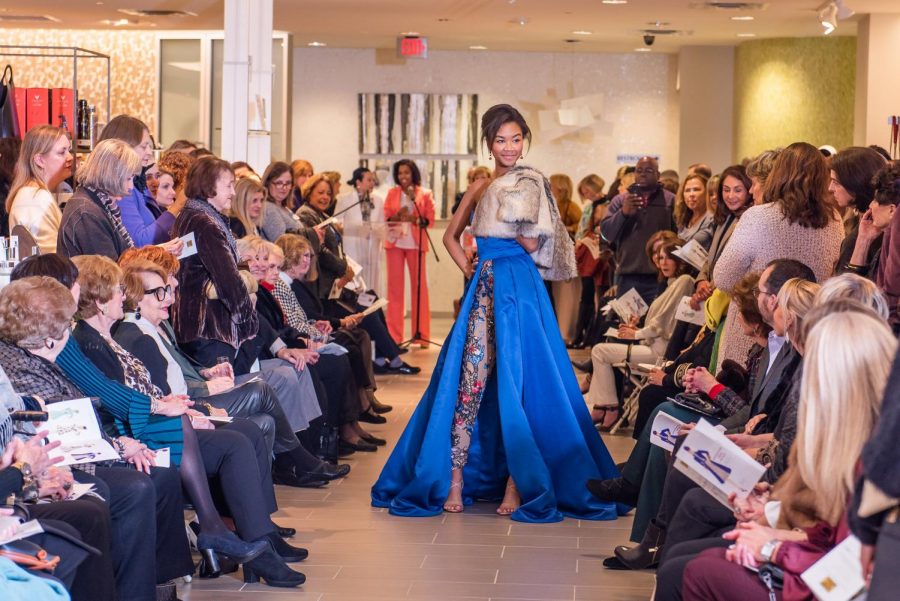 Hedy Strnad was not only a Jewish dressmaker, but also a Holocaust victim. Although Strnad did not survive, the sketches of her designs live on in to this day.

Strnad wanted her sketches to be sent to America to get a job as a designer before she was captured by Nazis. Her sketches were discovered later in The United States and are now recreated by nine students at The University of Alabama.

Apparel design instructors Brian Taylor and Paula Robinson teamed up to take on this project upon being contacted by the Birmingham Holocaust Education Center contacted this past summer to begin preparation for an exhibit that would showcase a recreation of Strnad’s designs.

Taylor chose the students to recreate Strnad’s sketches in a contemporary manner to have them featured in a fashion show, “Inspirations from the Past,” in addition to being displayed at the Abroms-Engel Institute for the Visual Arts in Birmingham.

Taylor said the students were approached in December and from then forward had the time leading up to the fashion show at the end of January to complete everything.

Even with each student only having to design one piece each , it was still a short amount of time because the students had to first do research about the time period and designer herself. The students had to think of how they wanted to modernize the pieces and source their own fabric and trims, take on the design process, find a model and have them fitted.

Taylor said the students realized how real the project was when they found out the cost for the materials was covered by the Birmingham Holocaust Education Center.

However, he knew the students could think quickly on their feet when they did face problems along the way. Taylor said everyone did well and had a smooth process.

Taylor said this was a different opportunity for the students and played as a challenge outside of the classroom. This was not just an assignment but a real design challenge, and overall he was proud of each of them.

“Knowing that she didn’t survive, and that her designs actually get to live on through their work, I think all of them commented about how moving that experience was and how much it meant to them to be able to participate in a project like this,” Taylor said.

Taylor said the event, which was hosted by the retail store Gus Mayer on Jan. 27, was emotionally moving, and the audience remained engaged throughout the show as the models were energetic. The students were able to talk about their pieces as the models walked the runway while also having the opportunity to network and answer questions the audience had.

Mary Rives Drake, a senior majoring in apparel design, said she loved the sketch she got.

Drake’s assigned sketch was of a winter look, a coat dress. She said to add a piece of herself to the design while keeping the balance between her vision and Strnad’s was to make the outfit strapless and more tailored.

“I wanted to create a look that was very like timeless because we were supposed to update it you know from 1939-2019, but I really wanted to create something that still had like kind of an old-world feel,” Drake said.

Drake said she wanted to marry the two decades, the 30s and 40s, into one look. She said she has an eye for materials and wanted to use the best she could.

Drake said her favorite part was the actual fashion show and getting to see her final product on the runway. Each student designer that was chosen had a different viewpoint and style, and Drake noted it was neat to see a variety of pieces that were recreated.

She also wanted to make something Strnad would be proud of, as her sketches were finally able to be showcased on the runway and let her legacy live on.

“I think it is definitely important to like look to the past for inspiration,” Drake said.

“You can tell that they really spent a lot of time like putting stuff together, so it was cool,” Drake said. “Like I tried to use some more like old fashion techniques putting mine together and like hand sewed parts of it, so I think it’s just important to look back to like old techniques for people in the fashion industry.”

This was Drake’s first solo project, and she felt confident about it. She said it was a great learning experience for not only her but all the student designers who were able to participate.

Jennica Mancarella, a junior majoring in apparel and textile designs, was also excited to bring these sketches to life.

Mancarella said Strnad’s sketches seemed modern to her anyway, but she knew what she wanted to do with them from the beginning. The sketches were assigned at random, and she switched with another student so she could create the look she wanted.

Mancarella’s assigned sketch had a blue jacket with a dress underneath and an overskirt. She wanted to replicate the look with a twist by creating a cropped fur coat and putting lace pants underneath the overskirt instead of a dress to make the design modern.

“You get to take it from one century to the next,” Mancarella said.

Mancarella overcame one of the issues she faced during her design process in that she had trouble with the lace fabric getting to her. Although she had to re-order it three times, the third time was the charm and the fabric arrived. However, the construction part came easier to her thanks to her strong sewing skills.

“I’m just happy I kinda got the opportunity to, you know, transform her sketches or her design into real life,” Mancarella said.

This was Mancarella’s first time having anything of her designs on a runway model, and she said she heard good feedback from audience. She said it was an amazing feeling and wishes they could do it all over again.

“History needs to be told, and like, you can’t forget about it and this is a way to keep her relevant and her designs relevant just by bringing it back to life,” Mancarella said.

She said the project not only keeps Strnad’s legacy going, but is also another important reminder of the Holocaust.