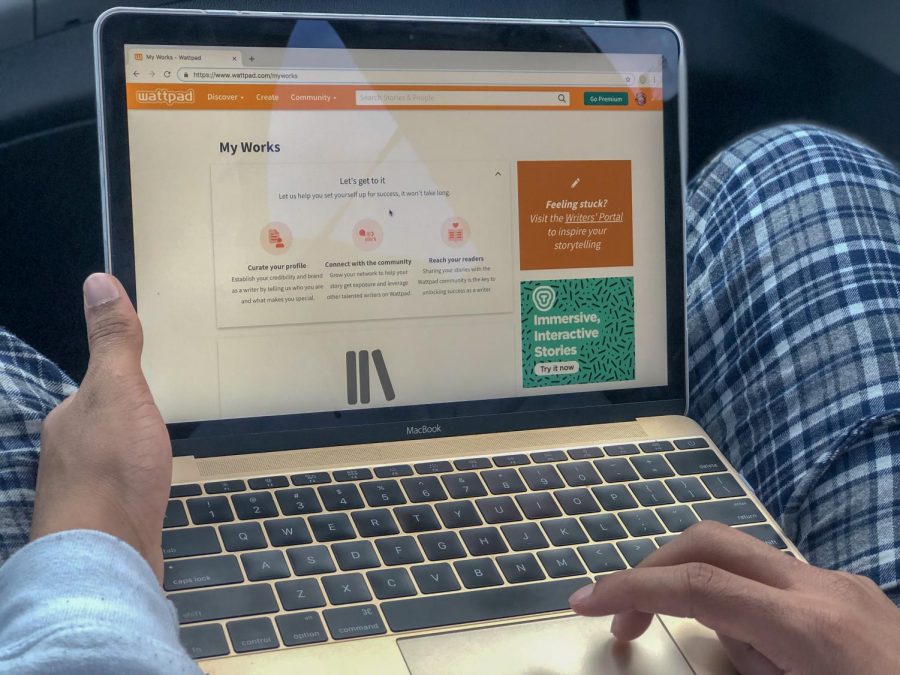 It was the holy triumvirate of Bella Swan, Edward Cullen and Jacob Black which first led Abbigail Wester-Johnson to the shore of the unrelenting ocean that is online fiction writing. The junior majoring in English and political science was in middle school when she began reading stories on Wattpad, which offered an “insane number of ‘Twilight’ fan fictions,” Wester-Johnson said. “Some of them were pretty well-written, too.”

Wattpad is a multi-platform social media community that encourages users to publish stories that can be read for free by other community members. Wattpad’s flagship app now boasts more than 500 million uploads from its user base of more than 70 million people, according to the company’s website.

In high school, junior English major Amanda Kate Jones struggled to find and purchase all the books needed to sate her reader’s appetite, so she turned to Wattpad. For Jones, the app was an easy way to read the genres she loved at a price she could afford.

“My greatest struggle reading growing up was never having enough money to read all that I wanted, so I enjoyed having free books at my thumbs,” Jones said.

Though it is perhaps the most prolific, Wattpad isn’t the only publishing platform that has drawn in UA English students. When she was younger, Wester-Johnson also read fiction on Quizilla, a quiz website that morphed into a fan-fiction repository before being shut down in 2014. Another popular hideaway is Archive of Our Own, sometimes referred to as AO3, a website run by the Organization for Transformative Works, a nonprofit that seeks to preserve and legitimize “fanworks and fan culture in its myriad forms,” according to the organization’s website.

Freshman English student Elena House occasionally reads stories on AO3, where “there is a larger pool of LGBT representation in [fictions],” House said. She also cited more accurate and well-rounded depictions of young people, which she attributes to the youth of those who write fan fictions on the platform. To House’s point, the vast majority of writers on AO3 are younger than 30, according to an informal, Tumblr-helmed 2013 census of the users. One of those writers, in fact, includes herself.

“I’ve [written fan fiction] as a joke; I’ve done it seriously,” House said. “It feels nice when writing longer pieces to just take a break and write drabbles about characters who already exist in the public eye.”

Jones, too, has published her work online through Wattpad.

“I love the idea of putting my work out there to be read, but I’m really self conscious about the works I put the most time and effort into,” Jones said.

Wester-Johnson, who plans on bringing a young adult dystopian novel to Wattpad in 2019, has never uploaded an original work online before, but she recognizes the importance that such platforms have for young readers and writers.

“I think [online publishing platforms] are very important for people of all ages that want to be writers but don’t necessarily have the knowledge or skill to become published yet,” Wester-Johnson said. “It’s also a great way to build a base of readers to make publishing in the future easier. It was also important to me because it allowed me to read hundreds of stories I would otherwise not have had access to.”

Though fan fictions and self-published online stories may seem totally separate from the world of traditional trade book publishing, many authors have made careers out of their online work. “The Kissing Booth,” a 2018 Netflix original movie starring Joey King and Molly Ringwald, is based on a novel of the same name by Beth Reekles. Reekles, a 20-year-old romance author, has been published by traditional presses four times after being discovered on Wattpad.

Reekles published the novel “The Kissing Booth” on Wattpad at 15 years old, and she isn’t the only young writer to use the website as a slingshot into paid writing. In 2013, when Anna Todd was just 24, she published “After” on Wattpad. “After,” whose main characters were college student Tessa Young and One Direction band member Harry Styles, spiraled into a series that garnered hundreds of millions of views. Todd quickly signed deals with Simon & Schuster and Paramount Pictures, which will release a movie based on “After” in April.

When Reekles and Todd published their respective novels on Wattpad, it’s likely that they inspired their millions of readers to try writing themselves.

If content continues to inspire content, perhaps Wattpad readers can look forward to reading and writing their fan fictional sequels to “After.” In this world of remixes, remasters and reinterpretations, maybe fan fictions based on fan fictions are not so fantastical.