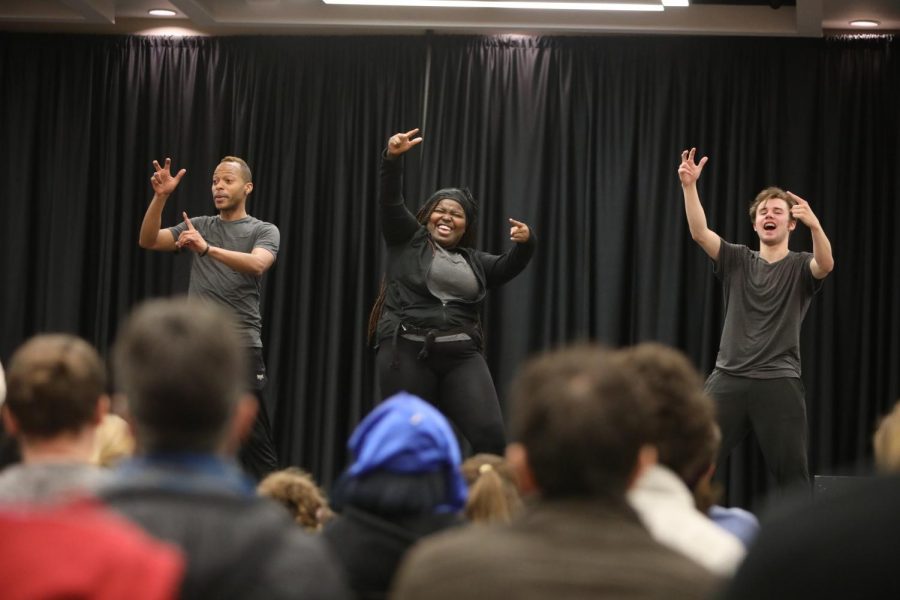 Silence isn’t typically the telltale sign of an appreciative audience, but it is for the Sunshine 2.0 theater troupe.

“The applause was eerily quiet, but I think that it’s supposed to be,” said Joseph Arrigo, a senior majoring in theatre and political science. “And I mean that in a good way, especially because we were signing the applause.”

Arrigo was just one of more than 50 people who lifted and waved their hands in applause at the Ferguson Center, a response to the troupe’s performance of their educational variety show that utilizes both American Sign Language (ASL) and voiced English.

Sunshine 2.0’s performers are Shiann Cook, Jerald Creer, Hayden Orr and Lauren Putz, professional actors with fluency in ASL. Cook, who heard about Sunshine 2.0 when the troupe performed at her Cleveland-area college, is the only hearing member of the troupe. Both Cook and Putz contributed their voices to the show, translating for their castmates, but Arrigo says it was sometimes unnecessary.

“This performance had an incredible use of physicality and specificity, aspects that are very easily lost in text-based work,” Arrigo said. “Sure, they used ASL, but I could still understand what was going on because of the incredibly specific physical choices that the actors made.  This was particularly important for me, as someone who has very little exposure to ASL.”

The performance included a mixture of pieces from two different Sunshine 2.0 shows: “Life on Earth” and “Wild Designs.” The troupe began with a physical comedy explaining the scientific method, which quickly morphed into a goofy romance between Orr and Cook. Putz, who took on the role of a science teacher, asked the crowd to sign along with her, repeating certain words and waiting for the audience to sign back. It was a choice that communication studies professor Darrin Griffin says made a big difference.

“I was excited when the performers engaged the audience and asked them to sign some of the sign language vocabulary being used in one of the scenes,” Griffin said. “That level of interaction made it easy to become fixated on what was happening on stage and experience a full level of escapism from other things.”

The show also included various pop music dances. The troupe incorporated ASL into choreography for songs such as “Shining Star” and “Just Like Fire.” But the first dance after intermission was perhaps the most serious. Titled “Parasitism,” the choreography mimicked the jerky movements of puppetry, with Orr serving as the puppetmaster, and Cook featured as the puppet. The dance ends with Orr ripping Cook’s heart out, and the antagonistic dynamic between the two dancers suggests something larger about modern gender dynamics.

Creer had his moment in the spotlight with an interpretative dance about the water cycle. Creer utilized his entire body in the performance, with wobbly legs and rocking arms to represent the ocean and a slew of other exaggerated movements meant to suggest the evaporation, condensation and precipitation that was explained by the small infographic behind him.

The troupe also performed two poems, one titled “1-15,” wherein each line began with a number, and an interpretive performance of “Jabberwocky,” the nonsensical Lewis Carroll poem that explains the slaying of a monster called “Jabberwock.” Orr and Putz worked in tandem to relay the story of the poem as Cook recited it aloud.

By the end of the show, the crowd had “warmed up” to the mixture of ASL and voice that guided the audience through the performance, Arrigo said.

“I think any hesitance stemmed from the audience trying to figure out who the participation was for: hearing, hard-of-hearing, or completely Deaf,” Arrigo said. “As the show progressed, I think we all figured out that it was for all of us.”

Sunshine 2.0’s performance was organized by the Critical Languages Center (CLC), which is currently working to expand its offering of ASL classes.

“In the past several years, ASL has become one of the most commonly taught languages in the United States,” said Doug Lightfoot, chair of the UA department of modern languages and classics. “So we’ll have a lot of high schoolers coming in who will have had ASL, and it’s nice for us to eventually be able to offer a higher level.”

The department currently offers ASL classes at the 100 level through the CLC, which seeks to offer courses on less commonly taught languages.

Though ASL is grouped into the CLC, it is quickly gaining popularity among college students looking to learn a new language. ASL was the third most studied non-English language at colleges in the United States in 2016, according to a report by the Modern Language Association.

“ASL is a real, human language,” Lightfoot said. “If you ask someone on the street what they think sign language is, you will get any answer under the sun. But it’s a whole human language, just like American Indian languages, just like German or French or Spanish.”