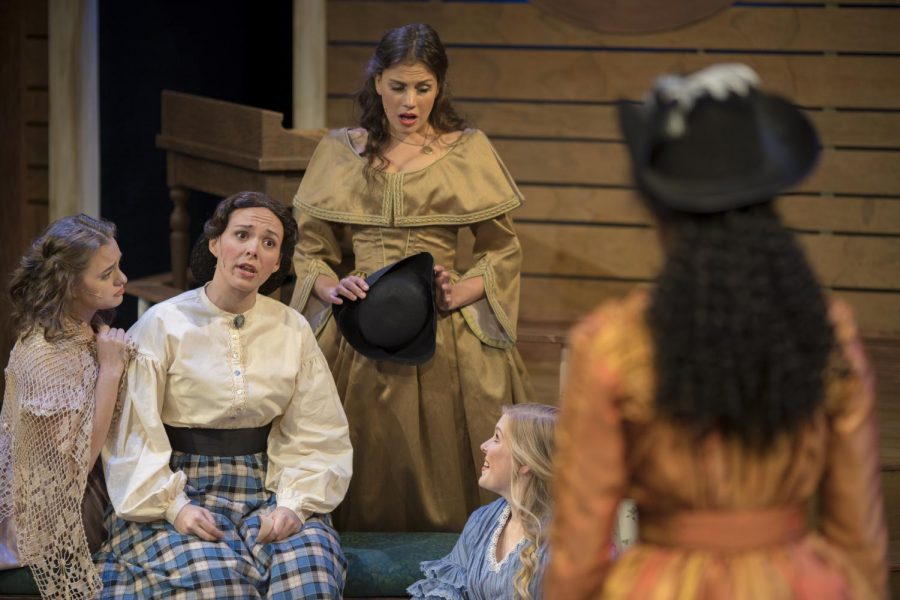 As of Tuesday, a record-setting number of women are going to hold offices on Capitol Hill. Among them are the first Native American and Muslim women elected to Congress, along with several state-specific firsts. In Tuscaloosa, Desirée Wilkins uses a familiar story to relay a message of female empowerment.

Wilkins, a sophomore majoring in theatre, plays Jo in the The University of Alabama’s adaptation of  “Little Women.” Wilkins said she’s enjoyed showcasing the relevant themes portrayed in the 150-year-old story.

“Little Women,” though it is long past its centennial, manages to tap into the current zeitgeist. It is a story by a woman and about women, coming at a time when women were stepping into the spotlight both on and off the stage.

“With the #MeToo movement, wage gap and continuous sexism and misogyny in politics and the workplace, women have to stand together now more than ever to make their voices heard,” Wilkins said. “That is exactly what Jo and her sisters do in ‘Little Women.’”

“Little Women,” a novel by Louisa May Alcott, follows the four March sisters and their mother, Marmee, as they navigate work, love and family in Concord, Massachusetts during the Civil War. Meg, the oldest sister, is a teacher and a romantic; Jo, the primary character, is an aspiring writer with a temper; Beth, the glue holding the girls together, is a pianist who wins over the family’s irritable neighbor; and young Amy, a proper lady, is an artist who wishes to be rich and accepted in Concord high society. Together, they form an inseparable group of personalities, deemed “little women” by their father, who is off fighting in the war.

“Despite the fact 22 publishers have told her she should ‘return home and have babies,’ [Jo] continues to write and defy the odds everyone set against her, believing she can do anything with her sisters by her side,” Wilkins said. “Women are doing this every single day. They are banding together, marching and fighting to break stereotypes that are set.”

Now adapted into a musical for the Broadway stage, Alcott’s story has more than 20 songs woven into its narrative. The music takes its cue from Beth’s piano talent, and the musical is scored by a live pianist.

Melaina Rairamo, a junior theatre major, portrays eldest sister Meg, but she wasn’t familiar with the story of “Little Women” before joining the production. Now, Rairamo says the show has a clear message for those watching.

“This show proves the strength of women going against the norms of society,” Rairamo said.

On opening night, when the lights dimmed and piano began to play, it became clear that the tiny theater was ready to burst with students ready for the show to start. Bentley Maddox, a graduate student in communication studies, said he had one of the best seats in the house, perfect for crowd-watching.

“The feeling in the room was that friends had come together, bound by their obligation of seeing the show for their class assignment,” Maddox said. “They were about to start the show and a girl straight up walked across the room by the stage to go find a bathroom.”

Despite the crowd’s seeming indifference before the show, when two of the musical’s main characters shared an emotional scene downstage, Maddox said there were sniffles “heard across the room.”

“And yes, I was sniffling as well,” Maddox said.

The stage was set as a mock attic, elevated from the ground with a desk littered with papers. At stage left, there was an old piano in front of a door. A bench and a trunk, ever-moving, took their places at centerstage. A small furnace, ominous for those familiar with the story, sat around the corner from the attic. Purple and white lights shone on the trim stage’s planked wood veneer. The audience had been thrust right into the home of the March women, the heart of Alcott’s over-a-century-old story.

When Alcott first wrote “Little Women,” it was groundbreaking. The novel’s five main characters were independent women, immediately locked into the canon of inspiring female characters. In August, The New Yorker’s Joan Acocella collected a list of female creatives inspired by the novel.

Margaret Atwood, Nora Ephron and Stephenie Meyer are among the famous writers inspired by the story of female resilience. Now, the leading ladies of the UA production of “Little Women” have joined their ranks.

“Women are still struggling for power everywhere in the world, and this show has an extremely strong message regarding feminism,” said Joelle Gill, a sophomore theatre and dance major who stars as Amy. “Every girl and woman needs to hear this story.”