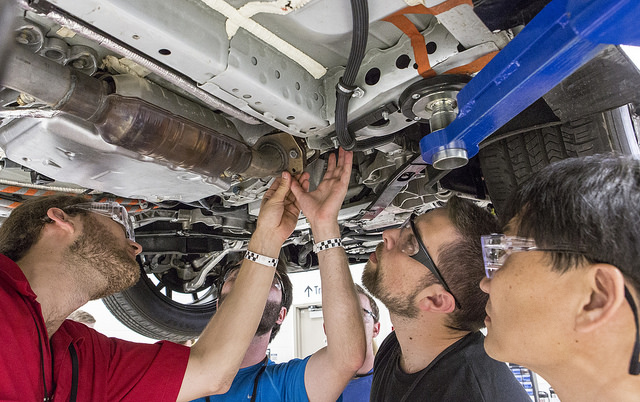 After finishing third in the EcoCAR 3 competition earlier this year, a group of UA students are preparing their project for the EcoCAR Mobility Challenge.

These students were one of only 12 groups from different universities invited to take part in the competition. It is the second consecutive Advanced Vehicle Technology Competition that the University has been invited to.

The challenge itself will be passed down through multiple UA students, as it is a four-year long project. It encourages students to develop a hybrid-electric, autonomous vehicle.

The task at hand is to create their own version of the 2019 Chevy Blazer. They will focus on things like electrification, automation and vehicle connectivity while still maintaining adequate safety, utility and consumer acceptability, according to UA News.

“This field of hybridization and automation is on track to change the way we see mobility,” said Easton Davis, team project manager and graduate student in aerospace engineering and business administration.

The winner of the project is decided by a committee of members from the sponsoring companies. A few representatives from each company award or deduct points to or from the schools for their projects each year, and the overall winner is announced at the end.

Each year the project has a different task, but the overall goal is to make the Blazer a level 2 self-driving vehicle.

“We will make it so if you’re driving and you don’t see a car in front of you, the car will stop itself, or if you’re trying to merge and a car is in your blind spot, the car will move back into your lane,” said Bri Roselius, team communications director and a senior in public relations and advertising.

The team is able to take the lessons they learn in the classroom and do something with that knowledge. They are working to change the way cars operate.

“Professors here at the University work hard to teach us engineering theory, but applying it to projects like EcoCAR make it come alive,” said David Barnes, team engineering manager and a graduate student in mechanical engineering.