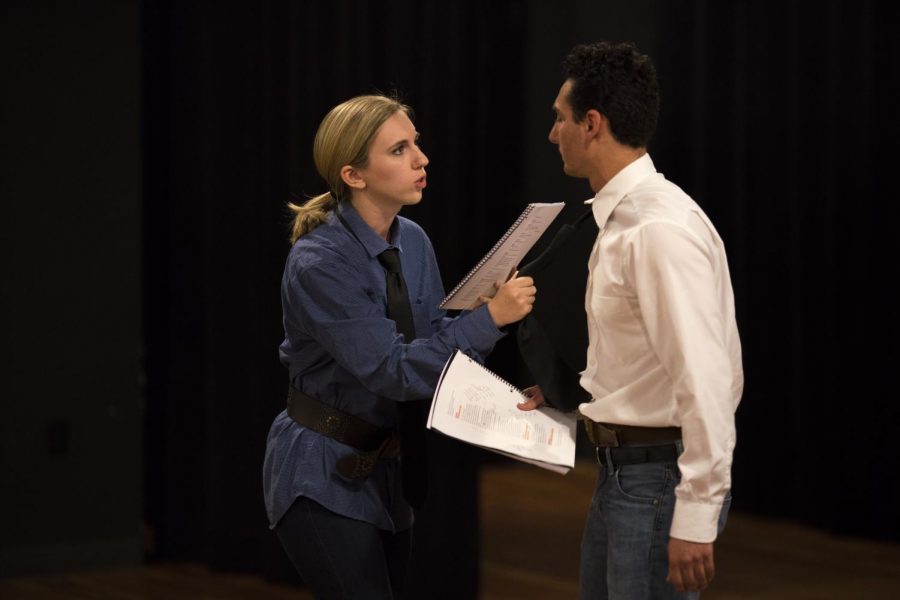 “Theatre in the raw.”

“We practice in a classroom,” Crawford said. “We do not get a stage space until the night of show, and then it’s like, ‘Alright, here you go. Here’s the stage. Figure out where your entrances and exits are, and we’re going to run it.’”

On Wednesday night, the result was a packed performance of “Othello.” Chairs were being added to the floor of Dinah Washington Arts Center as the show’s start time loomed. By the time the actors took to the stage, it was standing room only.

Crawford’s goal was to see 100 chairs filled, and he estimates that 130 people attended the performance. Crawford said that telling his cast about the crowded room beyond the curtain was a highlight of the evening.

“I thought Othello was about to faint, he got so pale,” Crawford said.

Natalie Jones Loper, a professor of English at the University of Alabama, was a part of the crowd. She said that this performance of “Othello” gave her the opportunity to pick up on things she had never noticed before.

“I’m going to go back and reread it now and I’m going to think about it in a new way,” Loper said.

The performance itself was minimal: Most actors dressed in modern clothes with belts looped around their waists, carrying the swords and daggers responsible for the play’s climactic acts of violence. Kailey Webster, a senior majoring in theatre, portrayed the villainous Iago, who engineers the events of the play through sly gossip and social manipulation.

Webster began rehearsing for the role of Iago less than two weeks before the performance, an experience she described as “very nerve-wracking.”

“As a theatre major, I’m used to having this level of preparedness, going out and knowing my lines. With something like this where there is so short a time and so many lines, you have to get to a place where you can let it go and let it be what it’s going to be,” Webster said.

“That was weird,” Webster said. “I almost lost my place completely a couple of times.”

The spontaneity of staged readings means that actors are always vulnerable to that mistake, Crawford said. But the rush of a staged reading is just as likely to result in something special. Crawford said he’s seen both ends of the spectrum, but “Othello” was a win.

“I’ve seen scenes like what we had at the end of the show tonight, where we had multiple people talking over each other, and the whole room went silent. People stopped checking their phones,” Crawford said. “That’s the beauty of it. Those moments when it clicks, it really clicks.”

Improbable Fictions will perform next at the Dinah Washington Cultural Arts Center on November 2 as a part of the Southern Literary Trail’s exhibition of the Steve Soboroff Typewriter Collection.