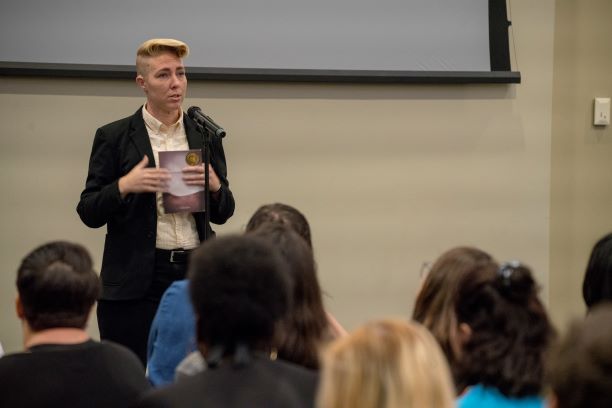 “I’m only going to read a few so that we don’t cry – or rather, so I don’t cry, and then you’re all stuck in this room with a crying person,” visiting poet Meg Day said at the start of their evening reading at Gorgas Library on Tuesday.

Day, currently a professor at Franklin & Marshall College, was reading from new, unpublished poems as well as poems from “Last Psalm at Sea Level,” Day’s 2014 collection of poetry.

Wells Addington, a professor in the UA English department, organized this night’s event. Although there wasn’t an exact number of attendees, the audience continued to grow as Day was introduced.

“I didn’t really do a headcount, but I’d put an estimate around 70 people,” Addington said.

Between poems, Day often lightened the mood with commentary and humor.

Day delivered a preamble for every poem, describing the influences and stories behind some of their work.

As the 2015-2016 recipient of the Amy Lowell Poetry Travelling Scholarship, Day was required to spend 365 consecutive days outside of North America, an experience they described as difficult and “violent.”

Day spent the calendar year of 2016 abroad, often “literally shuffled” from place to place due to the difficulties of getting a long-term visa. It was during this time that Day ventured to Malta and wrote “Future Climate,” an unpublished poem that intertwines apocalyptic imagery and romantic love.

Day read four new poems, works they described as explorative of the ways that personal and intimate relationships fit together with aggression. Day’s final poem of the reading was titled “Portrait of My Gender as Inaudible.” The poem cued Day to explain that they are working on a series of interviews with other deaf American poets.

This was just one of the times that Day referenced the process of writing poetry as a deaf person, a topic the audience was quick to ask about during Day’s question-and-answer session. Day had earlier described themself as coming from “a long lineage of deaf folks.”

“It takes a lot of work to appease y’all,” Day said. Day was referring to laboring over their own poems, which they typically compose in American Sign Language before putting them down on paper.

“Sometimes you don’t want your poems to be projects,” Day said. “It’s hard enough to write them, and then you have to do cartwheels for a sense you don’t have?”

Day’s genderqueer identity was also a topic of discussion, first brought up by Day during the reading of “Batter My Heart, Transgender’d God,” a poem from Day’s 2014 collection. The poem’s title was inspired by one of the “Holy Sonnets” of John Donne, a poet Day “fell in love with” during their graduate studies.

When asked about negotiating space as a genderqueer poet, the poet was unsure.

“I don’t think I ever get to set that aside, but I think I hope for that,” Day said.