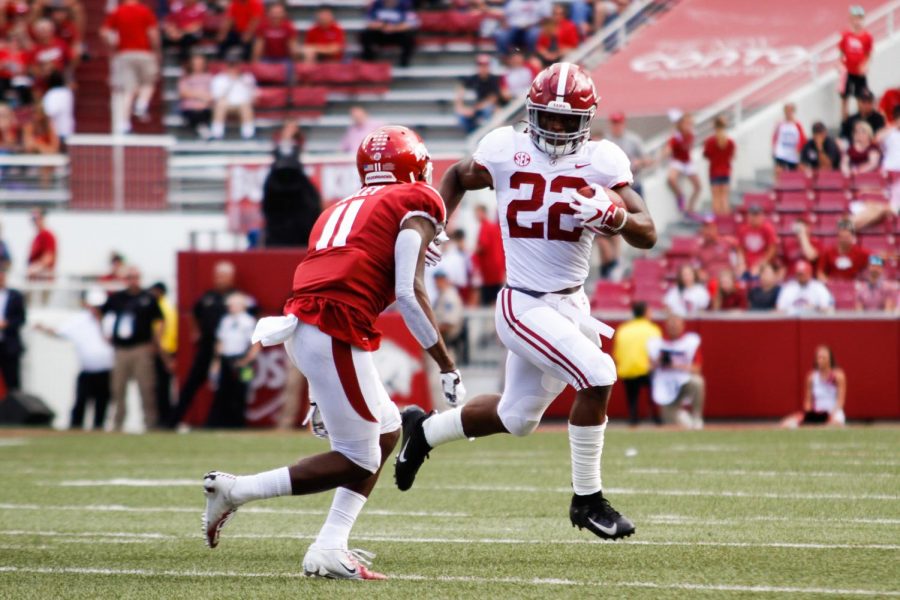 To say Alabama’s offense scores quickly might be an understatement. Of the 40 touchdowns it has scored this season, 14 were scored in under a minute.

“I don’t think anybody wants to apologize for scoring, so we’re not going to do that,” coach Nick Saban said. “But we’re not going to change our style of how we play offense to try to keep the ball and not make explosive plays. I think that’s counterproductive, and we need to be aggressive on offense, do the things that we do well and feature the players that can make plays for us. And if we make big plays, I think that’s great. Explosive plays and turnovers have a huge impact on the outcome of games.”

Thirteen of the 14 touchdowns came through the air and resulted in 518 yards. The three sophomore wide receivers have nine of the touchdowns, led by Jerry Jeudy with five.

“As our offense, our job is just to score,” tight end Hale Hentges said. “We’re just lucky to have those guys [Henry Ruggs III, Jeudy, DeVonta Smith and the platoon of running backs], and hopefully we can just keep doing that. I’m not going to say that we don’t need to score fast, even though our defense might need a little extra break. But as an offense, we’re just pedal to the metal.”

The lone rushing touchdown scored in under a minute came against Ole Miss when senior running back Damien Harris sprinted 43 yards for the score.

Harris’ touchdown run, Jaylen Waddle’s 97-yard touchdown reception and one of Ruggs III’s touchdowns are the only sub-minute scores Alabama has this season. The biggest reason is that Saban puts the second string in by halftime, if not earlier, as the Crimson Tide is averaging a 31-point lead by that time.

“I think the coaches have done a really good job of developing those first plays in the game that you want to run from a script standpoint,” Saban said. “That has been able to take advantage of some situations that we see from the defense. And I think the quarterbacks have done a really good job of executing the reads on a lot of these plays. It’s been a real asset for us to be able to get off to a good start in games and get a little bit of a lead. But we’re going to play better and better defenses as we go, so that will become more challenging.”

The Crimson Tide’s offense is averaging 20.7 points in the first quarter and 19 in the second quarter. It has also scored a touchdown on its first offensive drive in all six of its games this year.

Since the offense has such quick strike ability, the defense has been forced to be on the field more this season. Normally, the Crimson Tide dominates the time of possession, but through the first six games this year, it is holding onto the ball just 36 more seconds than its opponents.