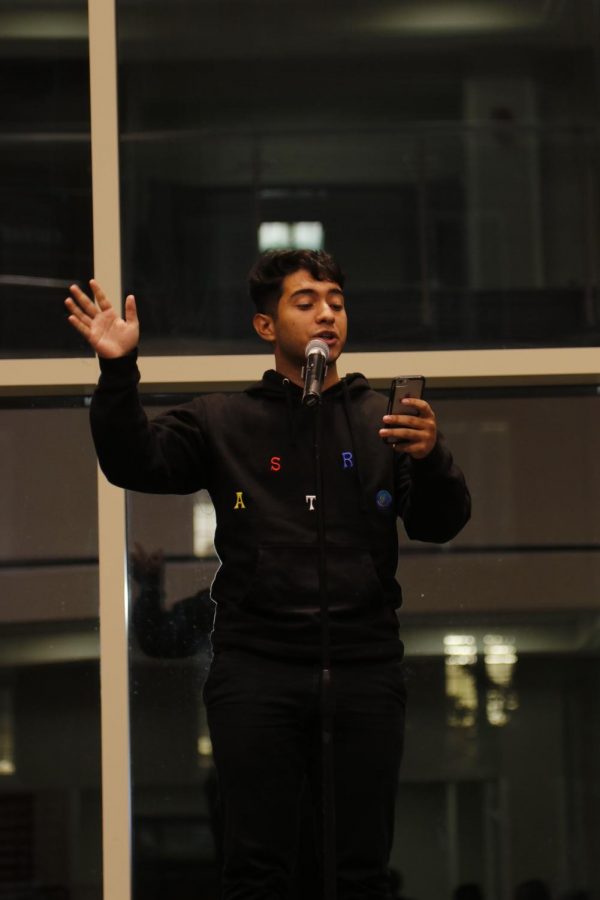 “America loves pure, and you are messy.” Those are the words of featured poet Mercedez Holtry, the centerpiece of Tuesday night’s celebration of Hispanic culture through spoken word. The first event of its kind, Para La Cultura focused on the expression of cultural identity as part of Hispanic Heritage Month.

Selena’s “Bidi Bidi Bom Bom” welcomed students into the Ferguson Center Great Hall, where people mingled between the two fireplaces, balancing backpacks and plates of snacks. This was the scene set for the first ever Para La Cultura, a celebration of Hispanic Heritage Month through spoken word on Tuesday night.

Professional poet Mercedez Holtry headlined the event. Holtry is an award-winning native of Albuquerque, New Mexico, who performed six poems, several of them from her books.

Holtry commanded the audience’s attention from her first words of performance onstage. A poem that began with “Dear Donald Trump” resulted in a chorus of snaps and murmurs of assent from the audience. The audience response only grew throughout the evening as Holtry shared poems that wove together English and Spanish, a verbal tapestry of her life as a young Chicana woman.

The crowd responded with a standing ovation.

“I loved the energy this audience brought,” Holtry said. “I felt really fortunate to have a platform to speak about ‘cultura’ and heritage. Spaces like these allow people who are marginalized to have a chance at being real, vulnerable and honest.”

Jahman Hill, a graduate student in communication studies and women’s studies, wandered around the room with a smile on his face.

“We expected 50 to 70, but there were over 100 people here,” said Hill, a poet and the vice president of the Alabama Student Association for Poetry (ASAP).

Hill served as the master of ceremonies, welcoming performers to the stage and encouraging guests to applaud, snap and voice encouragement throughout the evening.

The event was inspired by ASAP’s Blackout, a February event that showcased black poets in honor of Black History Month.

“We really wanted to showcase how important doing things for the culture is,” Hill said. “It doesn’t just apply to black history. Para La Cultura is for the culture, and it’s just about doing these events for culture and raising cultural awareness.”

The first performance of the night belonged to the African-American gospel choir, a group of 15 UA students who performed two songs a capella. Hill enlisted two UA students to open for Holtry, Antonio Rivera, a senior studying political science, and Sofia De Faria, a junior majoring in religious studies and philosophy. Each student performed two poems. Jarrod Stisher, president of the UA Hispanic-Latino Association (HLA), was impressed by their confidence.

“They’re willing to go up there and do what they do, what they love,” Stisher said. “A lot of people are scared of doing stuff like that. I have the utmost respect for anyone who will get up onstage and just do something that comes from the soul.”

Para La Cultura was hosted by the HLA and UA Crossroads, in partnership with ASAP. Hispanic Heritage Month lasts through Oct. 15. On Thursday, the HLA will host a semi-formal heritage ball in the Ferguson Center ballroom from 7 p.m. to 10 p.m. On Oct. 30, ASAP will host their second annual Halloween poetry slam at a location to be announced.