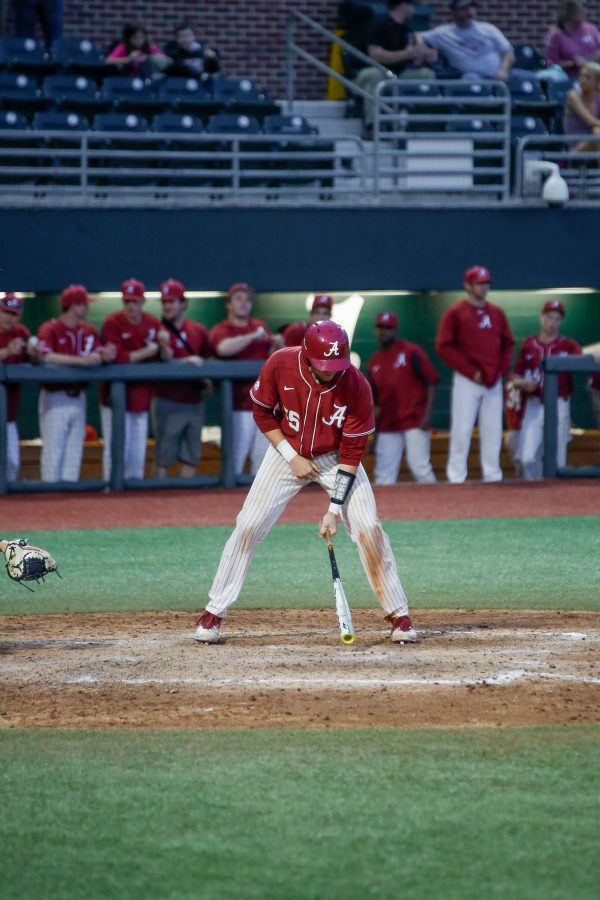 Coming into Tuesday’s game against UAB, Matt Malkin had knocked in six runs through the 18 games he had played this year. He didn’t have a problem knocking in his teammates as he accounted for six of Alabama’s 12 runs in its 12-3 win over UAB.

He sprayed the ball around the entire field, recording an extra-base hit to all three outfield spots. He finished 3-for-4 with a home run, two doubles and a walk.

“The ball was looking like a beach ball today,” Malkin said. “Just had some fun. I got back to what I do best.”

UAB was the first to scratch across a run in the second inning. The Blazers started the inning with a pair of singles. After a groundout to move both runners into scoring position, Zack Davis singled to left-center scoring both runners. Alabama answered with Malkin’s three-run home run in the bottom half of the frame.

The fourth inning is where Alabama really separated itself from the Blazers, and once again led by Malkin. Malkin stepped into the box in the bottom of the fourth with bases loaded and no outs. He drilled the first pitch he saw deep to center field for a double, scoring two runs.

Alabama also scored on a ground out by Jett Manning, a two-run home run by Cobie Vance and a double that went right down the left-field line by Hunter Alexander.

Vance finished 2-for-4 with two RBIs. Both hits went for extra bases. Overall, Alabama finished with nine extra base hits.

“They say hitting is contagious, and I don’t know if it’s statistically been proven, but gosh it seems that way,” coach Brad Bohannon said. “We haven’t had a lot of extra base hits the last couple weeks. Tonight, we did it back-to-back and with people on base… We have some older kids with some strength, [so] we are a team that should get some extra base hits.”

Alabama’s starting pitching was consistent like it has been for most of the season. Sam Gardner went four innings in his start. He allowed three runs and, for the most part, scattered six hits.

The bullpen continued to be stellar. It allowed just [two] hits and failed to walk a batter over the last five innings of work. Five different pitchers came out of the pen. Tyler Adams picked up the win, while Davis Vainer struck out two of the three batters he faced.

With the win, the Crimson Tide improves to 21-13 on the season, and ends its three-game midweek losing streak.

Alabama hits the road for its weekend series. It travels to College Station, Texas to face No. 22 Texas A&M. First pitch is scheduled for 8 p.m. on Thursday. Sam Finnerty will be the starting pitcher for Alabama in the short turnaround.