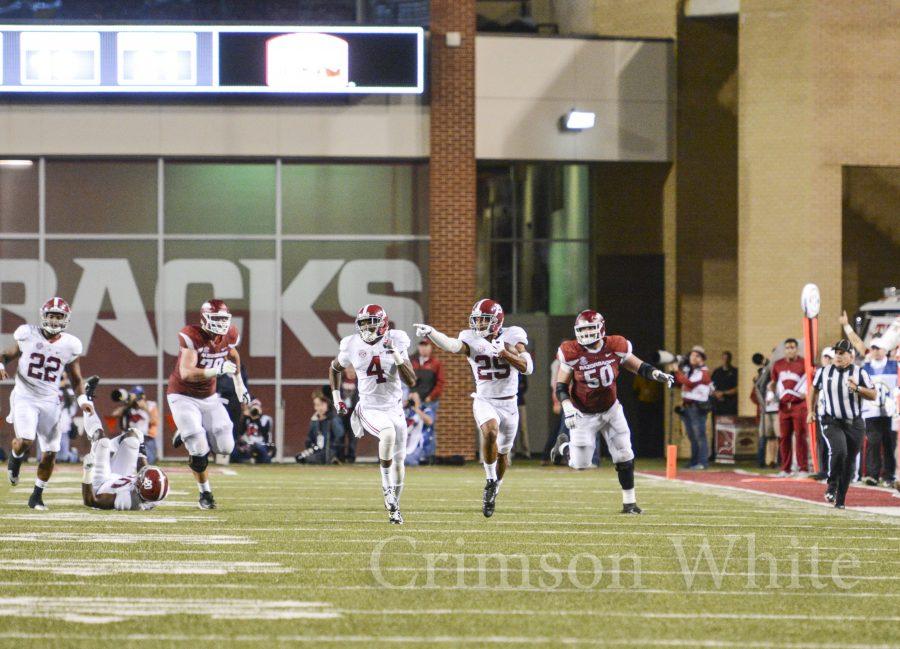 Alabama defensive back Minkah Fitzpatrick had already intercepted Arkansas quarterback Austin Allen twice when he picked him off in the end zone. Fitzpatrick could have just taken a knee with the ball then, but his teammate had another idea.

“As soon as I caught the ball, Eddie [Jackson]’s just like, ‘Mink c’mon, c’’mon,’” Fitzpatrick said. “So then I turned around and I just saw the whole left side of the field was open. So I just followed Eddie down the field and into the end zone.”

Jackson quickly led Fitzpatrick down the field, but Allen was standing in between the two Alabama players. Fitzpatrick knew Jackson would help him score, though.

That confidence paid off when the safety impeded Allen just enough that his teammate was able to slip by. Jackson jumped up and started celebrating before Fitzpatrick even crossed the goal line.

Fitzpatrick’s 100-yard interception return in the fourth quarter broke a school record, and gave the Crimson Tide the breathing room it needed to finish off the No.16 Razorbacks, 49-30, on Saturday.

“You know, Minkah’s a ball hawk,” defensive back Marlon Humphrey said. “He’s always there around the ball, so it didn’t surprise me. I guess three did surprise me a little bit, but kept making plays, he always does that.”

Fitzpatrick’s third pick of the game also tied a school-record feat last accompolished by Rashad Johnson against LSU in 2008. To date, the sophomore defensive back has returned three intercpetions for touchdowns. If he takes one more back, he’ll break yet another school record.

The Razorbacks fell behind early, but Arkansas coach Bret Bielema had his team in a position to cut Alabama’s lead into something manageable mutliple times in the second half. Alabama’s defense, however, always seemed to make a play — or more accurately, Fitzpatrick did.

He swatted a ball away early in the third quarter, but that play was quickly forgotten when he intercepted Allen for the first time to give Alabama a short field that would allow the Crimson Tide to extend its lead by seven.

Saban said a lot of his players instinctively know what to do to make the play, but he didn’t see a lot of that on Saturday as Arkansas passed the ball for 400 yards.

Besides Fitzpatrick, Saban said the other silver lining for his pass defense was the number of sacks the team got. The Crimson Tide’s pass rush sacked Allen six times for a loss of 49 yards.

Linebacker Ryan Anderson accounted for one of those sacks. He also tied fellow linebacker Shaun Dion Hamilton to lead the team with nine tackles, a new career-high.

“[We were] playing Bama football,” Anderson said. “We were built for these types of games.”