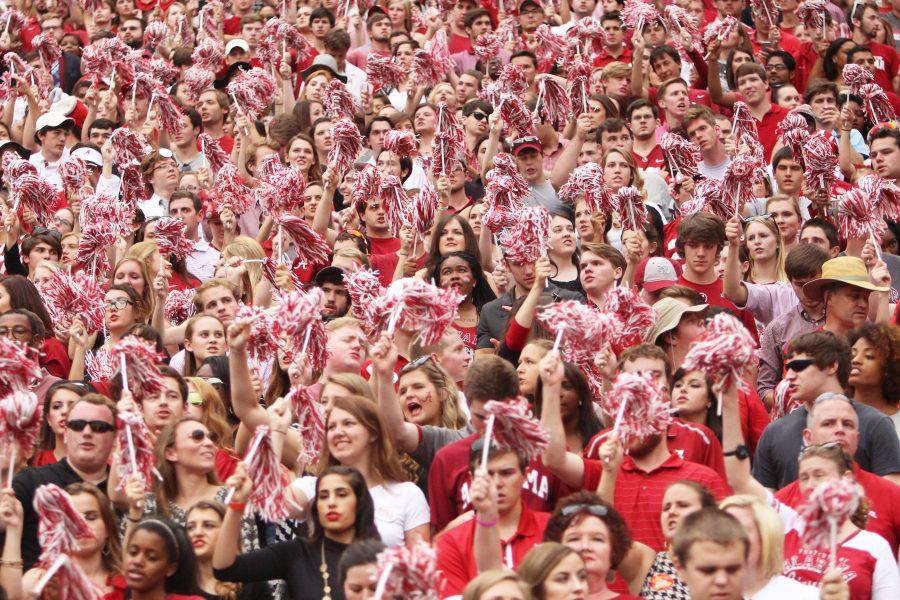 Within minutes of Alabama’s 49-30 victory over Arkansas last Saturday, the fans’ focus shifted. The football team could enjoy its victory for 24 hours, but the students and much of the fanbase outside of Tuscaloosa were ready to look ahead.

By Sunday afternoon, the already viral “I hate Tennessee” video had flooded Facebook and other social media platforms. There was less than a week until the Crimson Tide faced the Volunteers, and Alabama fans wanted to make the most of every second.

Making the most of it is not a problem for every student either. For Tennessee natives, such as mechanical engineering major Josh Smith, the rivalry is something he lives with 365 days a year.

Back home in Knoxville, Tennessee, Smith hears the same thing everywhere he goes. Sometimes it’s his friends from high school, his parents’ friends who visit the house or even people he runs into at church.

“Most people talk about how they’re going to beat us the next year, they talk about how this coming year is the year, nothing new,” Smith said. “…[Or] how [Tennessee quarterback] Josh Dobbs is the Messiah because he’s an aerospace engineer and a mediocre football player. Apparently that combination is amazing in Knoxville.”

On Saturdays, it’s not uncommon for Smith to open his phone and see a text from one of his friends congratulating him on a great play Tennessee made.

“Every single game I’ll get a text from someone when [Tennessee wide receiver] Josh Smith scores a touchdown [or catches a pass],” Smith said. “Someone from Knoxville will text me, ‘Great job, man. Awesome catch,’ just to make me mad, and it works. It makes me mad.”

“They low down, they dirty, they some snitches…”

Fellow Knoxville native and public relations major Brie Carter has a tradition she starts the Monday of Tennessee week — she wears something orange. Sometimes it’s a necklace or just a pair of socks, but everywhere she goes, Carter wears her color with pride.

“Orange runs through my blood and actually I am a Vol fan ’til I die,” Carter said.

Carter said she has received her fair share of taunting on campus, but she hears the same sort of comments back home in Knoxville. Afterall, she might root for Tennessee every Saturday, but she still attends The University of Alabama. She proudly says “Roll Tide” every other week of the year.

One person she can’t bring herself to root for, though, is Alabama offensive coordinator and former Tennessee head coach Lane Kiffin. His sudden departure from Knoxville after the 2009 season left a bad taste in the mouth of the entire Volunteer fanbase.

“The way that people talk about Kiffin is like they want to spit on his shoes,” Carter said.

The people of Knoxville appreciate Kiffin’s contributions to their program so much that some have, unofficially of course, renamed a sewage pipeline to “Lane Kiffin Sewage” in his honor.

“Watching the offense is hard, I laughed when [Alabama coach Nick] Saban was talking to Kiffin and he said he gave him an ‘ass-chewing,’” Carter said. “…Sometimes I just wish he’d slip up one too many times so we’d get someone else.”

That hatred of Kiffin is something Smith has a little fun with, though. Every year he posts the video many have come to call “Rocky Block” in which former Alabama player Terrence Cody blocks a would-be game-winning field goal for Tennessee in 2009.

Alabama finished that year undefeated and brought home the program’s first national title since Saban arrived in Tuscaloosa in 2007.

“That video probably more than any other video gets under Tennessee fans’ skin,” Smith said. “I think it’s 50 percent that game and 50 percent they remember Kiffin was their coach when that happened.”

Smith believes, like many Tennessee natives, that The Third Saturday in October is a much bigger deal than the Iron Bowl.

“I hate ‘em more than Auburn,” Smith said. “I think I said that already, but I can’t stress that enough.”

If Alabama beats Tennessee this weekend, Smith doesn’t want to play the Volunteers again in Atlanta for the SEC Championship game. He can think of a better way for the SEC East race to play out.

“The best case scenario for the season is that they lose to us this weekend and then they win out and Florida wins out and never plays that game with LSU and Florida makes the SEC Championship Game on a technicality because I think the fanbase would just implode,” Smith said. “I can’t think of a more painful way for that to go down.”

“Neyland Stadium, it looks like a garbage truck worker convention…”

Smith remains confident No. 1 Alabama should prevail on Saturday against No. 9 Tennessee, but the Volunteers’ games haven’t always played out the way they should this season.

With nearly all of Tennessee’s victories involving some sort of comeback attempt and late dramatics — including a fumble for a touchdown to beat Appalachian State in overtime and a successful Hail Mary to beat Georgia — the Crimson Tide would need a 35-point lead at the half for Smith to relax.

“I have a lot of crap coming back on me the first time Tennessee wins and I probably deserve it,” he said.

Carter doesn’t have the same confidence in her team that Smith has, but Tennessee ended one losing streak, to the Florida Gators, earlier this season.

“That would be amazing if they pulled that out,” Carter said.”They possibly have that in them. UT is a second-half team so Alabama can’t count them out ’til the last quarter. UT does have second-half magic.”