Third time's the charm: Kiffin's latest offense could best yet 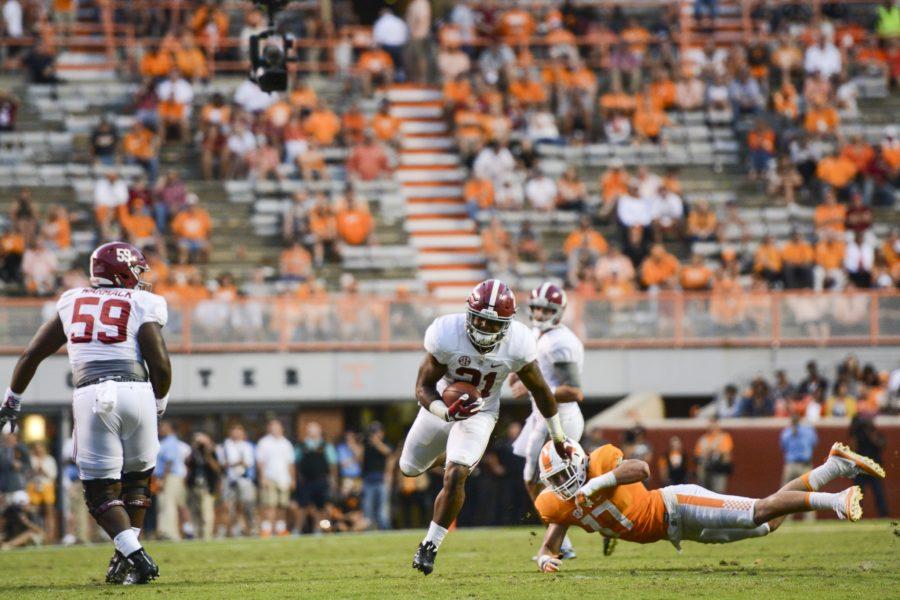 Alabama center Bradley Bozeman was pleased with the team’s most recent win over Tennessee, but even he didn’t realize how much success his offensive line truly had in the Crimson Tide’s 49-10 beating of the Volunteers until he left Neyland Stadium.

“I didn’t know that we rushed for 438 until we got on the bus and [defensive lineman] Jonathan Allen told me,” Bozeman said. “I thought, ‘Holy Crap! That’s a lot of yards.’ But you have to keep pressing. You can’t let it go to your head.”

Prior to that game, the Crimson Tide hadn’t rushed for over 300 yards as a team since it did so in 2014 against Southern Mississippi. The last time the team rushed for over 400 yards — against Tulane in 1992 — most, if not all, of Bozeman’s teammates weren’t even born yet.

Offensive coordinator Lane Kiffin has been slowly but surely rewriting the offensive record book since he arrived on campus, but what he has done with true freshman quarterback Jalen Hurts could prove to be his masterpiece.

So far the freshman’s success has manifested itself in an uptick in quarterback runs. In seven games, Hurts has carried the ball 74 times (counting sacks taken) for 428 yards and eight touchdowns.

Former Alabama quarterbacks Blake Sims and Jake Coker combined to carry the ball 157 times (counting sacks) for a total of 418 yards and nine touchdowns in each of the seasons they led the offense.

“I just think that [Hurts] adds an extra element to it that makes the defense have to account for him, which makes them in some cases a little softer on some of the other things that we do,” Alabama coach Nick Saban said.

“We want people to know we’re a dominant team, we’re a physical team and we wanna be able to win the line of scrimmage on offense and defense and move the ball the way we want to,” running back Damien Harris said.

So far this season, Alabama has not asked Hurts to attempt too many difficult passes. Instead, the passing game seems to primarily consist of forward pitches to wide receivers and quick screen passes. This sort of attack requires a little more discipline with perimeter blocks than a more traditional passing game might.

Saban said the coaching staff has shown the players good, bad and ugly plays to stress the importance of maintaining good blocks on the perimeter. With the success Alabama is having this season, the Crimson Tide might not need the passing game to evolve much going forward.

Perhaps one reason the Crimson Tide’s offensive numbers appear to be trending up is the team’s ability to turn any play into a big one. On Saturday, 10 of the 76 plays (13.16 percent) ran by Alabama’s offense went for at least 20 plays. Alabama now has 47 such plays this year. Last year’s group finished with 65 offensive plays of at least 20 yards for an average of 4.33 per game.

“There’ve been a few of them on there where we made an explosive play that could have been more explosive if we would have finished the perimeter blocks,” Saban said. “I think our players get it from that standpoint.”

Despite the criticism from the man in charge, the divide between the two teams gets even bigger when only looking at offensive plays that went at least 50 yards. The Crimson Tide officially hit the double-digit mark in this category on Saturday when running back Bo Scarbrough found the end zone from 85 yards out.

Last year’s team had exactly half that number  — only five plays — when it finished its first seven-game stretch. By the end of 2015, the team recorded an additional eight such plays.

“We always pep each other up,” tight end O.J. Howard said. “We want everybody to make a big play. Everybody blocks hard for each other, we just want to see everybody succeed, just do what’s best for our offense. That’s what makes us so successful this season.”