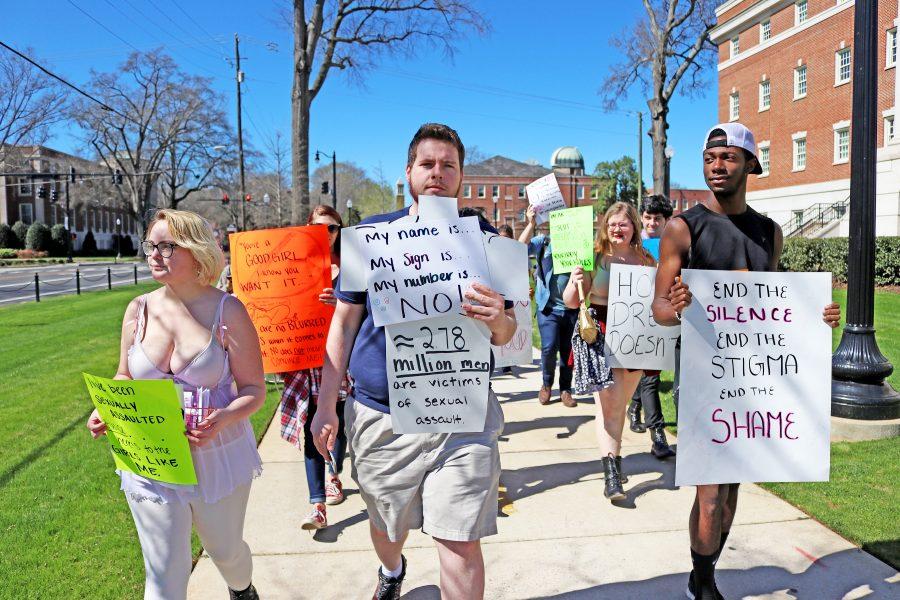 From “the walk of shame” to slut shaming, women’s rights activists have found much to take issue with on college campuses. At one event over the weekend, the members of Not On My Campus addressed why society equates sex appeal with shame.

Responding to the current environment on college campuses, Not On My Campus hosted a very different walk of shame; one dedicated to raising awareness of campus sexual assault.

Annabeth Mellon, leader of the march and a freshman women’s studies major, noted that sexual assault takes many forms.

“The truth of the matter is that anyone – no matter your gender, sexuality, age or what you look like – can be a victim of sexual assault, and that’s something to be aware of,” Mellon said.

She also wanted people to know that men experience the problem and need to be part of the solution.

“Men are reluctant to get involved in issues like this, because it’s often seen as a women’s problem,” Mellon said. “For the men on campus who have been sexually assaulted, we would like those men to know that we hear them and we believe them and we recognize their struggles as valid.”

The march started at Denny Chimes, and participants marched down University Boulevard, through fraternity row and back. Marchers carried signs citing sexual assault statistics and slogans, such as “No matter what we wear or where we go, yes means yes and no means no.”

Participant Kloe Timbers, a freshman majoring in marine biology and art, noted the march was an important assertion of women’s right to security on campuses.

“Everyone has the right to feel safe and comfortable in their own bodies,” she said. “And I know that with everything that happens, and a lot is left unsaid, and people need to be aware.”

“Coming here, it seems even more prevalent. Women are being mistreated regardless of what anyone says,” he said. “I don’t need to throw around facts for it, because I’ve seen it.”

“I saw the effect it can have on women,” he said.

Throughout the march, protesters handed out “Consent 101” pamphlets that covered consent along with the steps one should take if sexually assaulted.

As they marched past Old Row, protesters experienced some negative reactions from people in passing vehicles. While some drivers shouted obscenities, other passersby offered words of encouragement.

At the march’s conclusion, many left feeling that the march had a positive impact. Daisy Ford, a freshman majoring in art, said the experience was better than she expected.

“It wasn’t as bad as I thought it was going to be,” she said. “I thought I was going to get a lot of yelling, or probably some things thrown. I kinda wish it was bigger, but this is the first year. I’m glad it’s going to grow next year.”