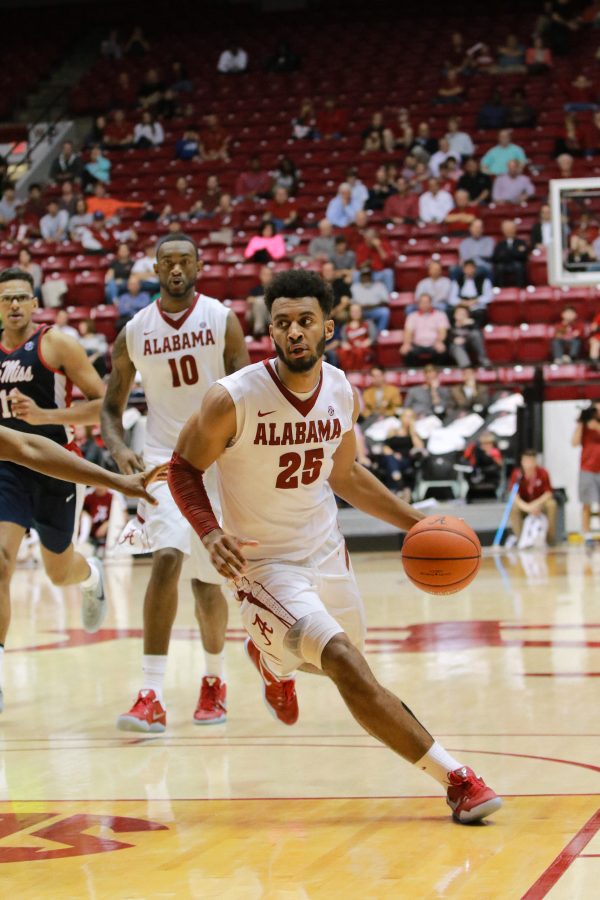 The Alabama men’s basketball team (17-13, 10-8 Southeastern conference) won’t get the chance to wash out the bitter taste that comes with blowing a 16-point lead – like it did in Saturday’s loss to Tennessee – until its SEC Tournament debut on Thursday afternoon, but on Tuesday the team still found reason for celebration during practice.

Earlier that morning, Alabama freshman Braxton Key was named to the SEC All-Freshman Team.  The first Alabama player to receive that honor since Shannon Hale (2014) was asked, by the coaching staff, to give his acceptance speech – but only after his teammates got done mobbing him of course.

“I wouldn’t be here if it wasn’t for y’all, man y’all make me look good on the court and practice y’all be pushing me,” Key said. “Thank you coach, coach Bob [Simon], coach Avery [Johnson] all the coaches. [Athletic trainer] Clarke [Holter] for making me healthy each and every game. [Strength coach] Lou [Deneen] for making me strong each and every day I wouldn’t be here without y’all.”

After Key finished, Alabama’s head coach gathered his players in and told the team it had come a long way. Although the Crimson Tide finished the regular season with the exact same number of wins, Johnson had a point.

Alabama won two additional SEC games this season to secure its first winning record in conference play since the 2012-13 season. That also happened to be the last time the Crimson Tide entered the SEC with a seed higher than fifth, which Alabama earned this season.

Key’s success on the court, especially in conference play where he finished as the SEC’s No. 17 scorer (14 points per game) and No. 14 on the boards (6.1 rebound per game), was instrumental in Alabama’s success in Johnson’s second season.

“[Early on] sometimes [Key was] struggling to make it through a workout, and now he’s first team All-SEC Freshman team,” Johnson said. “It really shows how hard he’s worked and how his teammates helped him on and off the floor to mature and develop and improve.”

The initial task for the freshman and the rest of the Crimson Tide is a familiar one – send the Mississippi State Bulldogs (16-15, 6-12 SEC) packing when the two teams meet on Thursday.

Despite the fact that Alabama defeated this team twice in the regular season, Johnson said his team knows it isn’t good enough to overlook anyone it might play in Nashville, Tennessee.

“It brings an excitement around, being a high-ranked team, but at the same time you got to back it up,” junior Riley Norris said. “Because there are going to be hungry teams that are lower that want to knock you off.”

Should Alabama win its first game inside Bridgestone Arena as expected, it will face another team it defeated in the regular season (although it took four overtimes) in the fourth-seeded South Carolina Gamecocks on Friday.

“I wouldn’t be surprised if a team wins the SEC Tournament that’s not in the top four in terms of seeding,” Johnson said. “Because you’ve had a lot of teams wins games on the road.”

Hitting the road hasn’t always provided Alabama with the desired results, but hostile environments haven’t affected the team the way they did before Johnson arrived. The win over the Gamecocks was the program’s first true road win over a ranked opponent since 2004.

It also helped the Crimson Tide secure five true road wins in back-to-back seasons for the first time since it did so in 1994-96 under coach David Hobbs. Alabama is also one of five SEC programs that won at least half its games away from home while also finishing above .500 on the road in SEC play.

“We’re moving the program, not the team, but the program in the right direction,” Johnson said. “We understood that it wasn’t going to be an overnight success, but I like the way we played on the road in the SEC.”