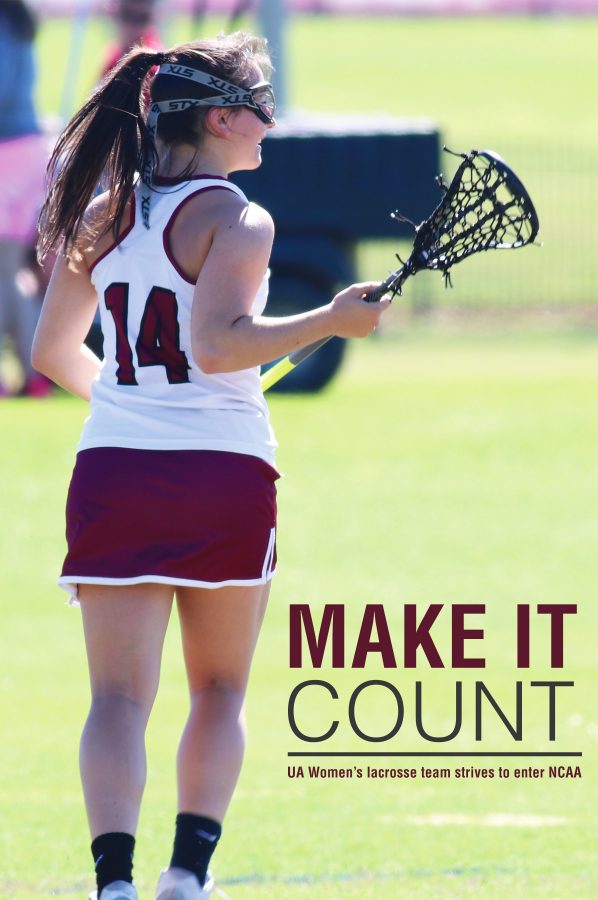 When the women’s club lacrosse team at The University of Alabama has an away game, the athletes have trouble finding volunteers to drive during the trip. The price of gas isn’t cheap, especially when the team must travel six hours to South Carolina for a weekend tournament.

Because it is a club team, it doesn’t have the same transportation provided to it as the varsity teams. The team must rely on driving personal cars and spending $60 or more on gas to compete outside of the state of Alabama – and that’s not including food and lodging fees.

Even though the drivers for away competitions are reimbursed for gas by team funds, the drivers still face the issue of adding extra miles to their own vehicles.

“Most of the time, that means that we’re taking personal cars,” team president and senior Jacquie Andreano said. “We assign people certain cars. We have to convince people to drive. No one wants to put the mileage on their car.”

This is a struggle that is common to club sports teams, not only at the University but across the nation. Funding is nowhere near the varsity level, and yet some of the teams are enjoying the kind of competitive success that inspires them to seek the next level – NCAA status. The members of the University’s lacrosse team believe they could compete at a varsity level, but for now they are a part of the University Recreation program and not connected to the Department of Athletics, like all club teams.

André Love, executive director of University Recreation, said the center receives about $40,000 from the University to disperse among 38 club sports. This, of course, means that each of the teams must also raise money on their own to cover expenses.

While transportation options are offered for travel for these teams, lacrosse team members say they simply don’t have the money to take advantage of them.

According to the University Recreation Sport Club handbook, charter buses must be requested two weeks in advance, and clubs are responsible for hotel room costs for drivers during overnight trips.

Andreano said the charter buses are chosen by a company affiliated through the University. University vans, however, typically range from $49-$79 per day. This semester alone, the team was scheduled to participate in six away competitions, with most taking place on both Saturday and Sunday. With 22 athletes on the team and two coaches, the largest type of van the University has available is a 12-passenger vehicle – so the team would need to rent more than one.

“We also have available to us the University vans, that we can rent through the Rec, but they’re usually way more expensive than personal cars,” she said. “We still have the same problem of finding people to drive… because you have to be 21 or over [to drive the vans.]”

Most, but not all, of the team’s expenses are covered by the athletes’ dues. Andreano said athlete dues increased from $700 last year to $800 this year to help cover travel, referee fees and other expenses.

She said the team was invited to Texas to compete in a showcase last year. This year’s officers met at the beginning of the year to discuss raising dues, so the team could have the opportunity to attend those competitions if invited.

“Those travel trips are really expensive, and we ended up going to Texas last year, but we did it all by parent donation,” Andreano said. “We wanted this year to be able to at least once do one of those big trips and not have to kind of… beg for money.”

About eight months ago, Andreano was contacted about an opportunity for the team that could possibly help its financial struggles. Gothard Lane, executive director of the Intercollegiate Women’s Lacrosse Coaches Association, suggested that the Alabama team enter the NCAA.

“I reach out to the club programs around the country, and say that if your club program is interested in becoming varsity, we’d certainly be happy to talk to you and give you advice how to best go about that,” Lane said.

He told Andreano that she and the head of her program should talk to the athletic director about the possibility of making the team a varsity sport at the University.

Andreano said she approached the team’s University Recreation coordinator, Wyant Boreson to discuss the opportunity and to find out more information on how to get in contact with then-athletic director Bill Battle. She asked him how to continue the conversation with the athletic director, but she said Boreson told her there wasn’t anything the Rec could do.

“Anytime a club is interested in moving up to the NCAA level, that is not something that we do within University Recreation,” Boreson said. “We do not know the process that would take place or would be required. That would be something that either the NCAA athletics here at The University of Alabama would have reached out to the clubs to have that conversation, that dialogue, or the club could reach out to the athletic department. But I would not be aware of who that individual would be.”

Junior and team vice president Joanna Keller said the outcome was discouraging because it’s a goal the team wants to accomplish.

However, Love said there are possibilities for the Rec to reach out to someone in the Department of Athletics for the team to connect with, but the Rec can’t do much more than that.

“We work closely with of the assistant athletic directors that we could put them in contact with – that we could probably make arrangements for them to meet with – but outside of that, that’s probably where our connection with them would end in terms of them becoming an NCAA sport,” he said.

Keller was elected president for the 2017-2018 school year, and she said she wants to continue to work toward becoming an NCAA team.

“I think the only thing we can do, with that kind of mentality, is just keep winning,” she said. “Show that we are above the other club teams and show that we deserve more from this school, more funding and attention. I don’t really know what else we could do.”

Several years ago, representatives at the Rec created a system to determine if a club sport can receive funding and how much each one will receive, according to Love.

“They can qualify based on the amount of money we have to allocate, they can qualify for some funds from us,” he said. “Typically, what we give is very small compared to what those clubs either fundraise on their own or they generate through memberships and dues. What we give them is a very small amount in terms of what they need and to be able to do some of the things they want to do as a club.”

Even with this system, there’s no guarantee the team will win the most money to cover the expenses of the sport. Lacrosse equipment is not cheap, Keller said, and the team also uses its dues to pay the coaches.

Team members participate in fundraising opportunities and seek donations and sponsorships from people in their hometowns and in the community, but sometimes the team finds difficulty raising money, especially because lacrosse is not as popular in the south compared to the northeastern parts of the United States.

“We try to do as much fundraising, but in a college town, people don’t really want to throw money at us,” Keller said. “It’s definitely an expensive sport.”

In the past, the team has partnered with Chipotle and Buffalo Wild Wings for nights where they receive some amount of what customers spend after showing the team flyer at the counter. They’ve also received a few sponsorships from establishments in the area.

Andreano said she wants the team to receive the recognition it deserves from the community and the University. Of the 15 games the team played this season, it won eight of them with only two being home tournaments. Teams played have included teams in Division II.

“It’s not uncommon for us to play Division II teams in the area,” Keller said. “UA Huntsville has a team, Montevallo has a team. Typically, we always win those games which means we have the talent above Division II teams. A lot of the time when we play other good teams, the refs come up and tell us that we’re playing above the level of club. The talent is there. All we need is that title.”

When comparing the team to varsity ones at the University, Keller said the women’s lacrosse team also has tough practices and talented players but doesn’t receive the same amenities and recognition that the varsity teams do.

Andreano said if the team were to become an NCAA team, most of its struggles would no longer be apparent. Currently, the team faces issues with practice when rainy weather occurs.

“We’d love to be able to use the band turf field or the turf soccer field because a lot of the rain cancellations are just because our fields are so old and dirt already,” she said. “A little bit of rain makes them mud pits. Turf fields ­– that doesn’t happen. You get a little bit of rain in the morning, you don’t have to worry about it in the afternoon.”

To be classified as an NCAA Division I team, it would need to be affiliated with a larger budget institution, be in good academic standing and compete against other Division I opponents, playing 100 percent of the minimum number of competitions.

With new Athletic Director Greg Byrne replacing Battle and having only been in the position for a little over a month, promoting a club sport team to NCAA would not be a simple task.

“The University of Alabama has a thriving club sports culture, and there are numerous factors to consider regarding a possibility of this type,” said Doug Walker, senior associate athletics director. “The Department of Athletics is asked about the possibility of adding scholarship sports on a regular basis but, with our new director of athletics having begun here just six weeks ago, this isn’t something that appears to be in the making in the short term.”

Keller said if she had the opportunity to talk to Byrne, she would do her best to convince him that the team is ready to be in the NCAA.

“I would definitely tell [Byrne] that The University of Alabama has a standard for our athletic program,” she said. “If we were to get on board with the lacrosse program before all of the other SEC schools, we could start recruiting. I know so many people in the Northeast, where lacrosse reigns, would 100 percent come down here to play. If we got that leg up before every other SEC school, we could start winning from the beginning and maintain that winning standard that we have.”