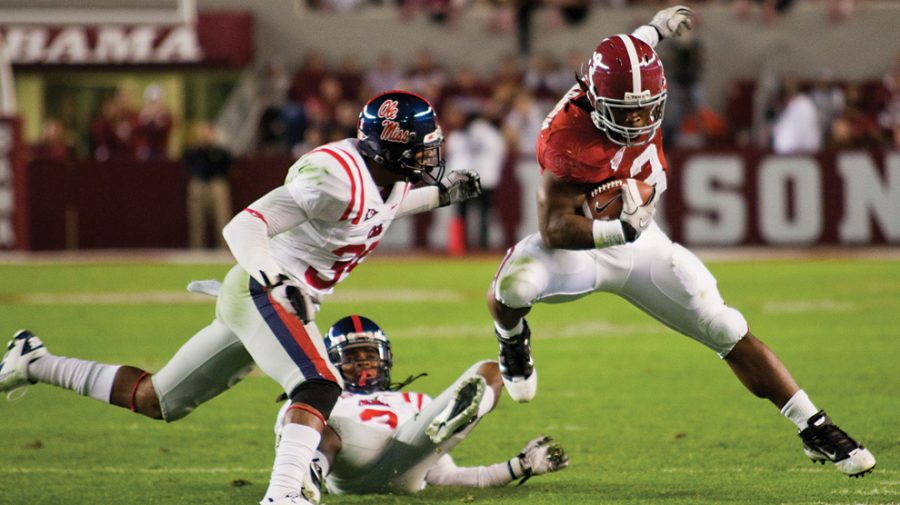 For the first 30 minutes of Saturday’s 23-10 victory over Ole Miss, Alabama looked like the national championship-winning team from last season.

The Crimson Tide had a comfortable lead and smothered the Rebels into just 41 yards and two first downs.

While watching the next 30 minutes, however, it wasn’t difficult to tell the Crimson Tide had lost a game (and nearly a second) in the first half of this season.

“As a team, we worry about it because that’s what we’re taught to do,” wide receiver Marquis Maze said. “We’re taught to play for 60 minutes, and we want to dominate each opponent we play every game.”

After a first half filled with Alabama scores and Ole Miss punts, the Rebels stayed even with the Tide the entire second half and gained 202 yards of offense.

That “Jekyll and Hyde” difference between halves is something Alabama has been struggling with all season. It began at Arkansas, when the Tide got in a big hole to start the game before fighting back for an improbable 24-20 victory.

Although Alabama’s next game against Florida was a blowout, all the damage to the Gators was done in the first half, and the Tide let off the gas down the stretch.

Last week, it finally caught up. Alabama played a tough second half against South Carolina, but it could not overcome an early 21-3 deficit and suffered its first regular-season loss since 2007.

Like head coach Nick Saban said after his team’s loss to the Gamecocks: “I was proud of the way we fought back in the second half, but what about the first half?”

Although there was no threat of losing this time, it was the same story again Saturday. Alabama was quite unimpressive after the break, as Ole Miss outgained the Tide in the second half.

“We’re still waiting on that game where we dominate out opponent for 60 minutes,” Maze said. “When we put it all together, I think we’re unstoppable. It’s going to come.”

Four conference games in, Alabama is still looking for that game.

“It’s all mental, really,” said junior safety Mark Barron. “You just have to be able to focus for 60 minutes. It’ll probably be a great thing [when it happens]. I fell like it’s on the way.”

Junior defensive end Marcell Dareus said although the Tide hasn’t found that perfect balance between the first and second halves yet, it’s not a difficult thing to accomplish.

“It takes a lot out of you, but if you execute your assignments, it’s really not that hard,” he said. “Just go out there and do what you’ve got to do and get off the field.”

Next week’s game against a struggling Tennessee could be a fantastic opportunity for Alabama to finally play the game it’s been looking for, as the Volunteers are 2-4 and nearly lost to UAB at home earlier this season.