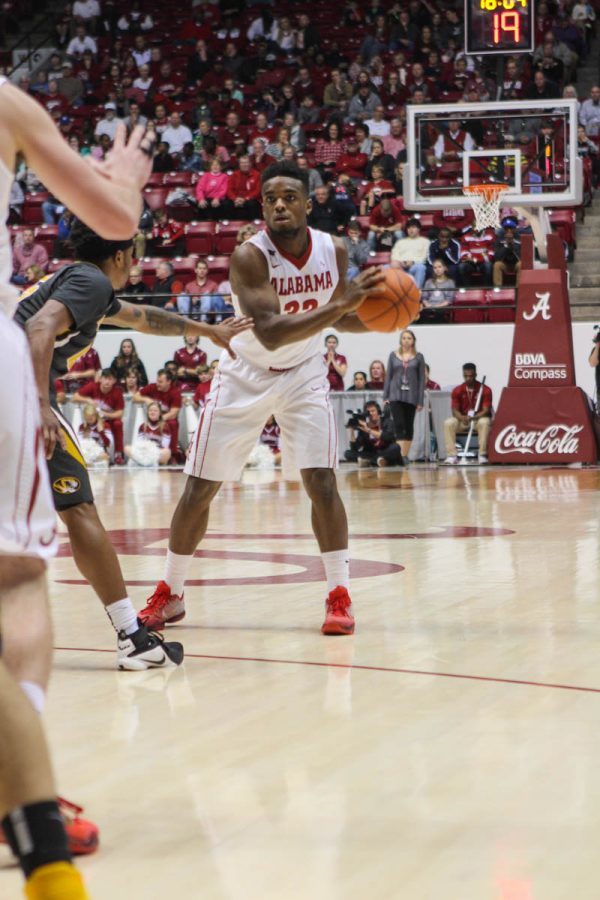 When the week started Alabama, Missouri and Mississippi State were the only three schools in the SEC that had less than three conference wins. Johnson told his team that it needed to break out from the bottom of the SEC standings this week.

“I told them I’m not going to lie to them we are right there with those teams [Mississippi State and Missouri],” Johnson said. “The schedule I told them a week ago, the schedule is leveling out now. There’s no more two games in 36 hours.”

Johnson and his team were able to celebrate back-to-back wins in conference play for the first time this season when Alabama beat the Missouri Tigers 80-71 in Coleman Coliseum.

“After the win on [Tuesday at] Mississippi State we got a little momentum and we came in and we just focused on practice,” Riley Norris said. “Everybody did what they were supposed to, and I’m just glad we got the W today.”

Missouri (8-15, 1-9 SEC) tied the game up almost halfway through the first half at 16 all, but the Crimson Tide (13-9, 4-6 SEC) went on a 15-2 run over the next four and a half minutes. Retin Obasohan sparked the run with his first five points of the day and added three more before his second personal foul in the game sent him to the bench for the remainder of the half.

Obasohan finished the game with 16 points and led the team in rebounding with a total of seven. Riley Norris scored 18 points to lead the team in the victory.

Missouri head coach Kim Anderson said the plan was to keep Obasohan away from the hoop, but as other teams have discovered this season that’s easier said than done.

“He gets in a lane and he’s got that floater, that things hard to guard,” Anderson said. “I actually watched, I think it was the Mississippi State game the other night, and wow he really impressed me. So he’s definitely improved [since last season].”

Alabama will hope to capitalize on the momentum gained from winning back-to-back SEC games when a suddenly vulnerable Texas A&M (the Aggies have lost two straight) visits on Wednesday.

“It does feel good to win two in a row,” Obasohan said. “We’re glad we got the W just like coach said and we’ll celebrate it for the rest of today and tomorrow we’ll focus on Texas A&M.”