OUR VIEW: Saban is unparalleled 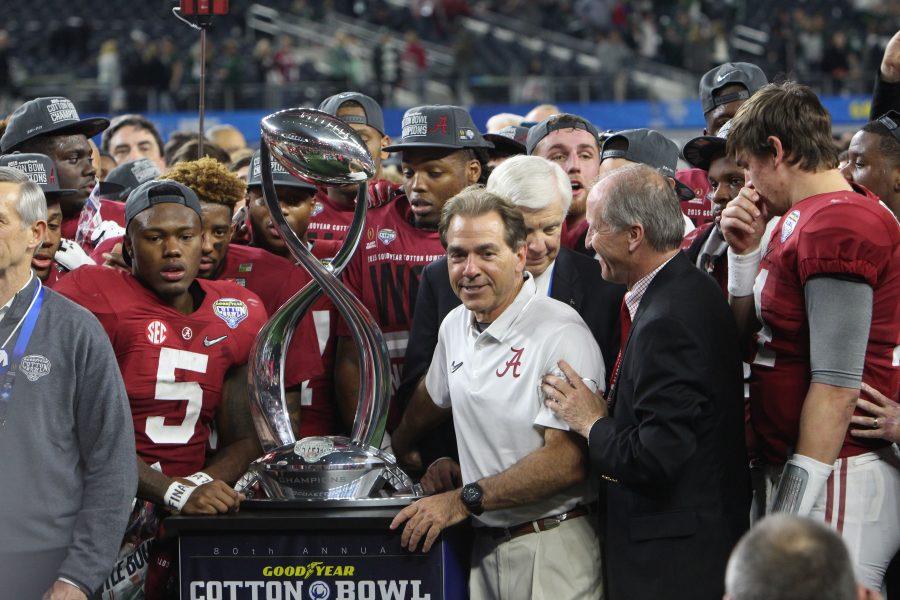 Years from now you’ll tell your kids about the glory days of Alabama football. You’ll tell them about the days when Alabama was on top of the football world and any loss was the end of the dynasty. You’ll tell them about when you walked the same campus as the greatest college football coach of all time, how one time you stood as close to him as you are to those kids, and you won’t be talking about houndstooth hats.

We are witnesses of an unprecedented run: four national championships in seven years. Only Notre Dame from 1943-49 can say the same. That was before conference championship games, and for a team that refused to play in bowl games, let alone a national title game.

Nick Saban wins because he consistently recruits the best players in the country and convinces them to sit on the bench and wait their turn. Arkansas coach Bret Bielema said on ESPN that they recruit Alabama targets by telling them they’ll be third string under Saban. Saban almost always wins.

Every one of his recruiting classes has won a national title.

He wins because he takes that talent and out-coaches his opponents.

People said he couldn’t adapt to the new era of football. He hired Lane Kiffin, who revitalized the offense and developed two first-year starter quarterbacks into playoff contenders.

His 100th official win at Alabama was the championship win over Clemson. One other coach reached that mark against the same team: Paul “Bear” Bryant.

Saban is 5-0 in national title games (including LSU in 2003). In five tries at a national title, he has never come away without the trophy. That’s ridiculous, unprecedented and borderline unfair.

Nick Saban never stops. He once famously complained that a national championship nearly cost him a week of recruiting. He is a perfectionist, never satisfied. In his parlance, there is a right way and a wrong way to do things, and Alabama does things the right way. Any deviation is unacceptable. The “Process” works. Five championships in 11 seasons in college.

In September, we devoted two pages to his role in the athletic department as “The Closer” for other sports. He talked about wanting Alabama to be more than a football school. With his help, Alabama sports have flourished across campus. He has helped other sports land top recruits. Since he arrived on campus in 2007, other teams have won six national titles – 10 titles that Saban has had a hand in.

Everyone wants what Alabama has.

When George Denny was president of the University, he pioneered the use of an exemplary football program to drive growth in University facilities and academic stature. With Bryant, his name adorns the most important building in this state. During the Saban era, the University has reached a level of growth that places it among the premier academic institutions in the South. The economic benefits of his program reach every corner of Alabama.

In the opinion of this editorial board, Nick Saban is the greatest coach of this or any era, and this University’s student body, alumni and this state should be immeasurably grateful.

Our View represents the consensus of The Crimson White Editorial Board.