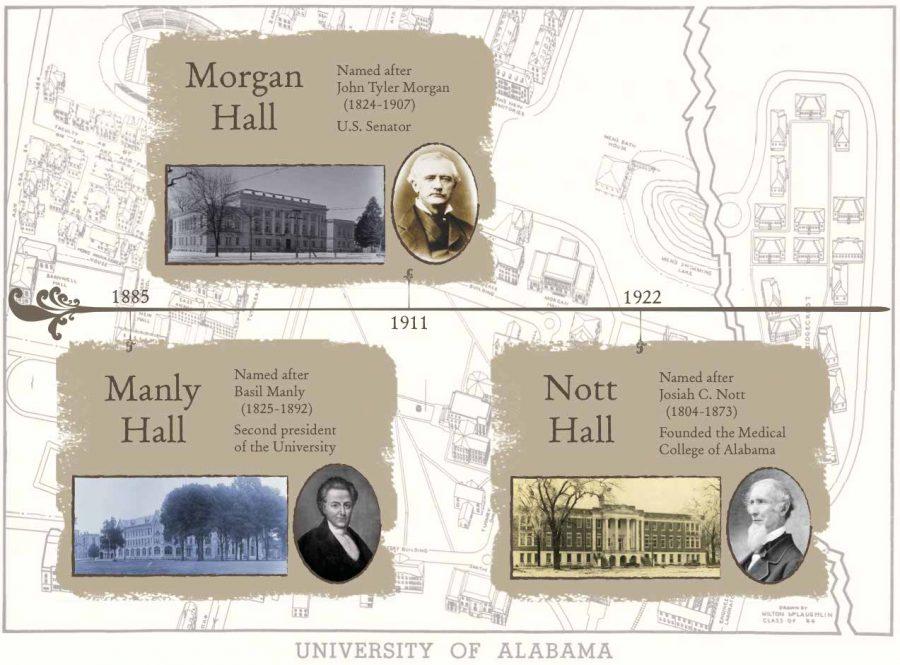 Pristine white pillars stand at the front entrance to Nott Hall, but the legacy of polygenecist, Josiah C. Nott, has tarnished with the light of contemporary sensibility. Nott, the namesake for The University of Alabama building, is infamous for claiming that different races were distinct species, blacks were scientifically inferior to whites, and Native Americans were doomed to extinction.

On a campus rich with Alabama history, Nott Hall is hardly the only building with a historically controversial namesake. With time, Nott, among others, has come to mean something entirely different to current students, many of whom do not know the true origins of campus buildings’ names.

“What [Nott] is most known for in the historical record is being one of the leading advocates of scientific racism in the United States,” said Joshua Rothman, professor of Southern history and director of the Summersell Center for the Study of the South.

Nott, born in Mobile in 1804, made a name for himself as a physician and surgeon. Besides founding the Medical College of Alabama, Nott wrote extensively on polygenecist beliefs and gained both allies and enemies – even among fellow white supremacists – for his views. By claiming separate creations, he denounced the idea that all men were descendants of the Bible’s Adam.

“[Nott] is sort of advocating these ideas at a time when most white people in the United States were white supremacists, but this made him extreme even among white supremacists, for the degree of his racism was out there on the fringes, even by the standards of his time,” Rothman said.

Built in 1922, Nott Hall now houses the UA Honors College. Across the Quad sits Morgan Hall, which was constructed in 1911 and dedicated to John Tyler Morgan.

Morgan was a lieutenant colonel in the Confederate Army who went on to serve six terms as a U.S. senator. Known in part for his work in supporting the construction of the Panama Canal and winning war reparations for the destruction of the University, Morgan was also known for his policies of black disenfranchisement. Those included the desire to relocate all black citizens in the South to the Philippines or the Congo.

Morgan expressed ideas borrowed from Roger B. Taney, the fifth Chief Justice of the United States who was known for the 1857 Dred Scott v. Sandford U.S. Supreme Court decision that reduced blacks to the status of livestock.

According to a report from the Southern Poverty Law Center, Morgan also went on to become Grand Dragon (a second-tier leader) within the Ku Klux Klan and support legislation to legalize hate crimes against blacks.

Just before Morgan’s time, a man named Basil Manly served as the second president of the University from 1837-1855.

A devout Baptist minister, Manly wrote the Alabama Resolutions, a list of demands to protect Southern rights, including the right of ministers to hold slaves, which he presented at a national convention.

Manly conceded that slaves were indeed humans, but fell back on Calvinist predestination doctrine to reconcile his views, claiming that slaves should accept their place in society as part of God’s plan. He owned more than 40 slaves who worked his plantation on the Black Warrior River and used corporal punishment to discipline them.

Manly was an ardent secessionist and served as both chaplain to the Alabama Secession Convention and first chaplain of the Confederacy. He also participated in the inauguration of Jefferson Davis.

His namesake, Manly Hall, now houses the religious studies and gender and race studies departments, acknowledging the many facets of his legacy.

Alabama is not alone with its lingering, controversial history. In 2010, the Board of Regents of the University of Texas voted unanimously to change the name of a dormitory named after William Stewart Simkins, a member of the Ku Klux Klan, to Creekside Dormitory.

The panel first conducted research and analyzed input from the University of Texas at Austin community, said Leslie Asher Blair, director of communications for the Division of Diversity and Community Engagement of UT.

Blair said the panel also discussed the history of the University and the consequences of renaming, as some felt that changing the name was equivalent to sweeping history “under the rug.”

She said almost every reaction was positive, though noting that a Simkins relative who lives nearby advocated to the panel to keep the name.

“So [the] decision was made to go with Creekside Residence Hall (it is located adjacent to a creek that runs through campus),” Blair said. “It was decided that the history of the residence hall be maintained with a plaque stating that it had originally been Simkins Hall.”

Currently at the University, the plaques in front of Nott Hall and Morgan Hall do not address the negative connotations with their namesakes’ history, nor does the tour section of the University website.

Even when considering Nott’s and Morgan’s contributions to history in relation to their contemporaries, Rothman said he still disapproved of the building names.

“If someone asked me, ‘Do you think we should change the names of these buildings?’ I think we should,” Rothman said. “I don’t think it’s appropriate to still have buildings named after people who had opinions that by modern standards are not only troublesome but really abhorrent.”