The Bama Theatre adds films to their Art House lineup 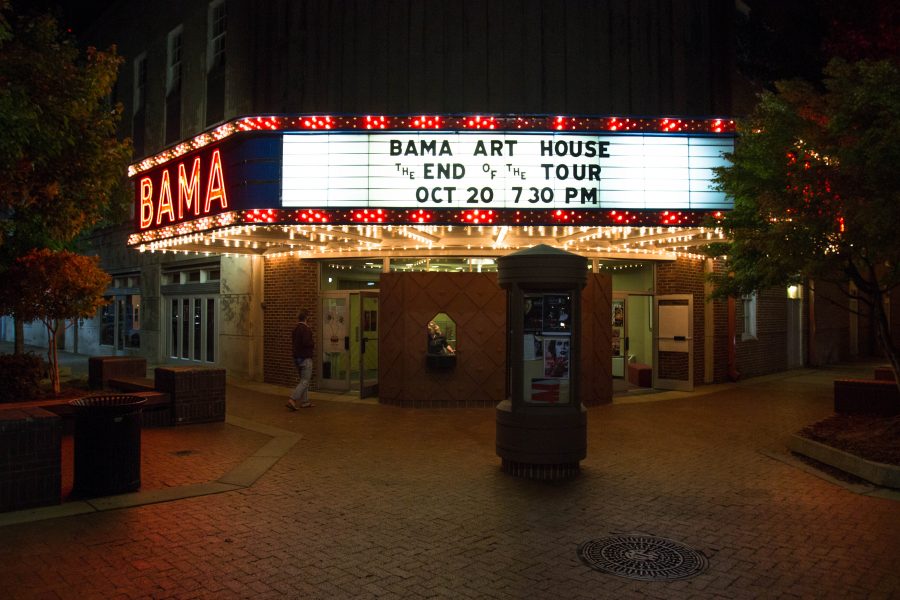 The fall season of the Bama Art House film series was scheduled to wind down last night, with a showing of “The End of the Tour,” a biopic about writer David Foster Wallace. The film starred Jason Segel and Jesse Eisenberg, and followed the writer at the conclusion of his press tour for his novel “Infinite Jest.”

However, “The End of the Tour” won’t be the last movie the Bama shows this fall. Two “bonus films” have been added to the theatre’s fall series. These movies will be screened on the next two Tuesdays at 7:30 pm.

“We had two open Tuesdays as we got into the calendar,” said David Allgood, who manages the theatre. “The first three films we had did tremendous with attendance, so we thought we’d add two more.”

Next Tuesday, the theatre will run “Western,” a documentary about a town on the border between the United States and Mexico. The film is produced by the same team that made the Oscar-winning indie film “Beasts of the Southern Wild.”

“It is a documentary, based on a story about a border town in Texas that becomes sort of a passageway for drug cartels from Mexico, and how it affected the town, negatively of course,” Allgood said.

“Western” played at the Sundance Film festival and has received positive reviews, however, the movie does not yet have a distributer. The producers contacted Allgood because they specifically wanted the film to run at the Bama Theatre.

The fall series will conclude with “Grandma,” a comedy starring Lily Tomlin as an outgoing senior helping her granddaughter (Julia Garner) collect money to terminate a pregnancy. The film is Tomlin’s first leading role in 27 years. “Grandma” also stars

The Bama Theatre will still run movies through the end of December with its “Five Foreign Films for Five Dollars” series. These movies are free for students. To get a ticket, all an interested viewer has to do is go to Five Restaurant and show their college ID.

Next Monday, in celebration of of Halloween, Werner Herzog’s classic horror film “Nosferatu the Vampyre” will haunt and disturb moviegoers. The following week, the theatre will play “Day For Night,” the most acclaimed film by French director Francois Truffaut.

“It’s a great way to see really renowned classics, and, we’re going to do a mix of classic and new foreign releases,” Allgood said.