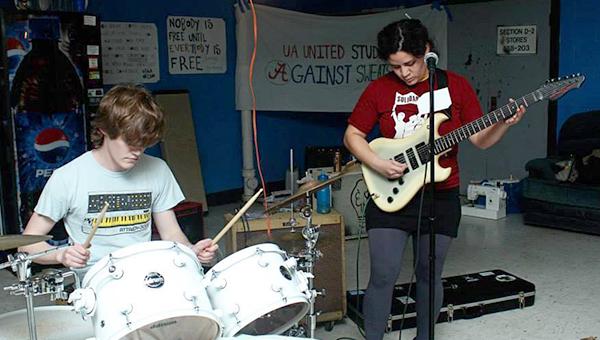 Several college towns nationwide have reputations for their bustling original music scenes. Although Tuscaloosa’s music scene may lack the national recognition of these towns, it’s thriving more than  residents realize.

At the center of Tuscaloosa’s local music scene is DIY Tuscaloosa, an underground community with the goal of fostering local music, art and creativity. The movement has a 400-plus member Facebook group, which serves as a community board for members to promote all art- and culture-related events happening in Tuscaloosa.   “The DIY part stands for ‘do it yourself’ so it’s supposed to be a center to the community,” said Anna Thomas, a senior majoring in Spanish. Thomas serves as the main administrator of the of DIY Tuscaloosa Facebook page.

Thomas was living in Birmingham and attending UAB when her friend Tino Newman first introduced her to Tuscaloosa’s DIY scene. In fall 2010, Newman invited her to a show at Baby Haus, a Tuscaloosa residence that doubled as a music venue. At the time, Newman lived in Baby Haus along with former Green Bar talent booker David Allen and several other roommates.

“I’d been to house shows in Birmingham but I’d never really hung out in Tuscaloosa,” she said. “It was like a real rock ‘n’ roll show. I feel like you could go to those shows and really let loose for a night.”

In March 2014, less than two months after Baby Haus’ fourth birthday, David Allen moved to Birmingham and Baby Haus hosted its final show. With its premiere venue and many of its original founders gone, DIY Tuscaloosa could have met an end. However, Thomas resolved to not let that happen.

“We knew Baby Haus was going to go away, and we didn’t want to just be like, ‘Well David Allen moved, it’s over you guys,’” Thomas said. “I personally can’t stand the thought of living in a town where there’s no local  music scene.”

For the next few months, Thomas continued booking DIY events, but booking shows without a permanent DIY venue proved stressful. Although she said she’s never had trouble finding bands to perform, the DIY movement needed a central location.  In early August, DIY Tuscaloosa found a new home when James Hale, a Northport resident, offered up his house for DIY shows.

“It’s probably more laid back,” he said. “I would say at a house show, certainly my house, there’s less rules. And I think the fact that it’s people and not businesses putting it on makes it feel a little more communal.”  DIY shows are open to all ages, making them accessible to a wider audience than many bar shows. The organization also encourages inclusivity by never enforcing a cover charge.

At every show, administrators pass around a bucket, and guests are encouraged to donate whatever they can, even if it’s just spare change. The money goes toward covering the bands’ travel expenses, and usually neither the bands nor the organization itself make a profit.