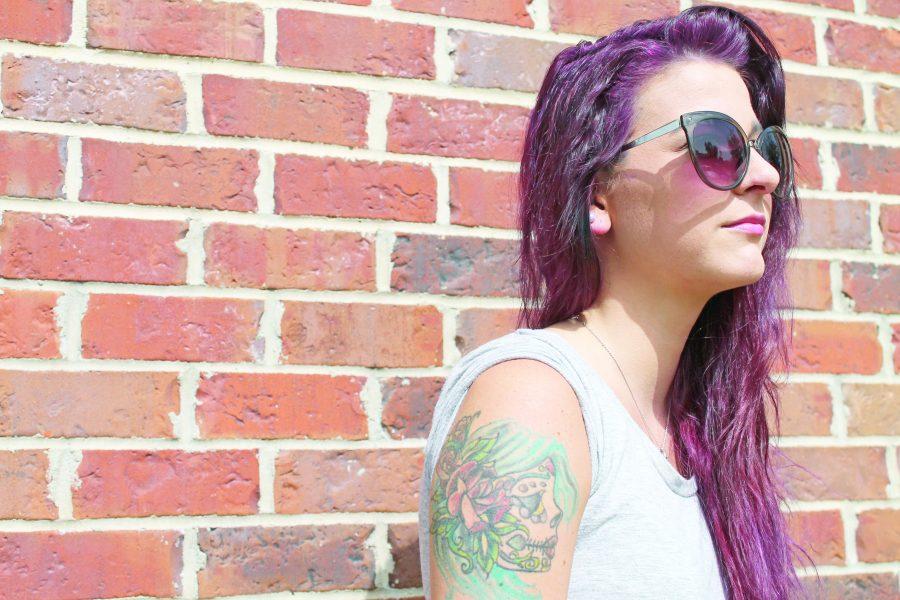 To some, they’re an act of rebellion. To others, they’re a means of self-expression. Many would even consider them an art form. There are a variety of different opinions on tattoos, but one thing is for sure: They’re on the rise.

McArthur has six tattoos and is considering a seventh. She said most of her tattoos have no significant backstory, but one of her favorite tattoos, the phrase “Chasing the wind” on her upper back, represents a memorial for her grandparents.

“I think it’s just a nice way to have things that mean something to you always with you,” McArthur said.

Patrick Rogers, a recent UA graduate who majored in English and creative writing, got both of his tattoos during his senior year of high school. The first one, located on his ankle, depicts three rabbit silhouettes in front of a setting sun. The second is a traditional Japanese Irezumi-style half sleeve extending to his chest.

Rogers’ Irezumi tattoo was completed during four seven-hour sessions spread over a period of about two years. Rogers said although the tattoo itself doesn’t hold any symbolic meaning to him, he appreciates the tattoos’ artistic quality.

“It was a deeply personal experience for me,” Rogers said.

The same cannot be said for everyone. Data from the American Society for Aesthetic Plastic Surgery stated the number of people seeking laser tattoo removal rose 43 percent from 2011 to 2012. Sara Reilly, a senior majoring in advertising, said she has been researching tattoo removal for about two years but cannot afford the thousands of dollars it would cost to remove all five of ?her tattoos.

In a New York Times article titled “The Existential Anguish of the Tattoo,” author Dan Brooks called tattoos “a way for your past self to exert power over your present self.” Reilly expressed a similar sentiment, saying her tattoos are permanent remnants of a past she no longer identifies with.

“All of them reflect momentary periods in my life, because I wasn’t as mature as I thought I was when I was getting them,” Reilly said.

Over the years, some of Reilly’s tattoos have become smudged or distorted, including a cross on her wedding finger and the phrase “Don’t forget to live” on the side of her foot. Some of her other tattoos turned out differently than she originally expected. For example, a flower tattoo on her neck, which she got to cover up another tattoo, ended up being much larger than the artist told her it would be.

“Tattoos are done by humans – it’s a human holding that needle over your skin, so they’re not ever going to be perfect,” Reilly said.

Reilly said even if her tattoos had come out flawless, she would still regret them.

Of the 38 percent of Millennials with tattoos, 70 percent said their ink isn’t usually visible – and they may have a good reason. According to a 2013 survey of randomly selected human resource professionals nationwide, 60 percent said they would not hire an applicant with visible tattoos.

“People in our generation are getting tattoos and making tattoos the norm, but it’s people in the older generation who are going to be the ones hiring us once we leave college,” Reilly said.

Although the stigma surrounding tattoos may still exist in the professional world, McArthur and Rogers said they have never experienced discrimination because of their body art.

“If I ever do find a job that doesn’t want me simply because I’m tattooed, then I say good riddance,” Rogers said. “I don’t want to work for anyone that is more consumed with what I have on my body than with my qualifications.”