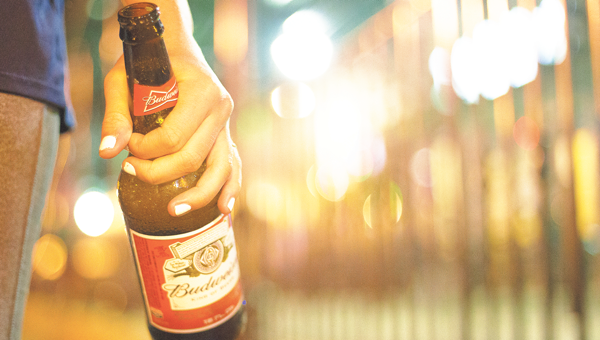 A state law that passed in May 2012 allows cities of a certain size to create districts with relaxed open container laws, making it legal for individuals to purchase alcoholic beverages, bring them outside and carry them around within the confines of the district. According to this law, Tuscaloosa could create up to two such districts.

“I thought we should look at having an entertainment district where people could walk freely from one place to the other with a drink, if they chose to do that,” Tyner said. “It was mainly just trying to make it more cohesive for an art- and entertainment-friendly downtown.”

The committee has met several times since 2012 and discussed creating an entertainment district on the Strip or Temerson Square in downtown Tuscaloosa. However, the progress of the proposed entertainment districts slowed following the July 17, 2012, Temerson Square shootings, in which Northport resident Nathan Van Wilkins allegedly opened fire in Copper Top bar downtown injuring 18 people. Former City Attorney Jimbo Woodson said at the time that security would play a major role in the continuation of the discussions for the committee.

Since then, the proposal has continued to meet resistance from city officials and residents.

“I actually was surprised,” Tyner said. “I didn’t [think] there would be much controversy to it because other cities do it. Maybe [people are] worried because it’s a college town and it might be abused as far as walking around with open beverages, but we basically do that at every home game.”

Since the law passed, several cities in Alabama have successfully incorporated entertainment districts into their downtown areas, including Huntsville and Auburn.

Huntsville’s entertainment district allows those of legal drinking age to purchase alcoholic beverages from one of 17 licensed bars and restaurants downtown. The drink is then served in a designated plastic cup, and the customer can take the drink outside and walk around with it. However, the district rules prohibit drinking in parking lots or bringing in outside alcoholic beverages.

Kelly Schrimsher, director of communications for the city of Huntsville, said its entertainment district was designed with an emphasis on art and culture instead of the open beverage aspect.

“We decided what we wanted was an arts and entertainment district, an area where there would be cultural animation, things to do, but something that was less predicated on an open container district,” Schrimsher said “We didn’t want it to become more of a Bourbon Street in New Orleans. We wanted it more on culture and activities and, oh, by the way, you can walk outside with a drink.”

Schrimsher said the added maintenance and law enforcement costs played a major role in determining when the entertainment district would go into effect.

“There were some people that talked about [having the district] seven days a week, but what it really came down to was resources,” Schrimsher said. “Once you open the district up and you have more people walking around with plastic cups, you have more garbage. We like to have a little bit stronger police presence, and that really was a cost issue for the city. We really did not have it in our budget to have that kind of enhanced presence.”

To jump-start the entertainment district and create the culture-rich atmosphere they desired, Huntsville city officials asked the arts council to program the district with live entertainment and creative activities.

“By putting the focus more on entertainment, I think people were anxious to come downtown and just see what was going on anyway,” Schrimsher said. “I do think there were a number of people who, after they got their drink and walked around, thought, ‘This is nice, but it’s really not the biggest deal in the world. It’s not a dealbreaker.’”

Although there have been some garbage-related complaints, Schrimsher said Huntsville’s entertainment district has generally been positive for the city. However, she said she’s unsure whether a college town like Tuscaloosa would experience similar results.

“I would be very nervous, to be honest, if I were [in] city leadership,” Schrimsher said. “For all the reasons Huntsville was worried about it, I think you would have that on steroids. I can tell you it will add a considerable cost to the government there. I’m not really sure the money the bars and restaurants will make off of it will compensate for the additional cost to the city.”

Nevertheless, Auburn has avoided many potential problems by only operating its entertainment district on special occasions, about six to eight times a year.

“I think by [only having the district for certain events] we’ve made it special, and people have responded to that,” said Kevin Cowper, Auburn’s assistant city manager. “They enjoy coming to the events, and they enjoy walking around while sipping a glass of wine or drinking a beer. The crowd has been very well behaved, and we’ve really not had any problems.”

Due to the flexible hours of its entertainment district, Auburn hasn’t had the significant increase in expenses that Huntsville experienced after launching its district.

“It really hasn’t been [more expensive],” Cowper said. “But then again, these are events where we would ordinarily have our crews come in for cleanup. So we really haven’t noticed any significant impact as a result of the events. We will typically put out extra garbage cans and bring in crews, but we would do that regardless.”

The downtown bars and restaurants generally see an increase in business during the district’s hours of operation, but Cowper said it’s unclear if that can be directly attributed to the open beverage policy.

Tyner said the endeavor would benefit from reaching out to other cities with entertainment districts to get a better idea of how the districts function in a realistic setting.

“In the very beginning of the recycling program, we visited places that had great recycling programs,” Tyner said. “I think we need to do the same thing. Just go visit. That’s probably what I would recommend.”

“We sure have more crowd control experience than most cities. We have about 150,000 people come to town for games,” Tyner said. “There’s always a handful of arrests, as there is on any college campus, but not anything that this would add to at all.”

Cowper said Auburn’s experience with gameday crowds has prepared the city’s police officers to maintain order when the entertainment district is active.

Tyner said the committee will most likely meet again sometime this year, but it’s still unclear whether plans for an entertainment district will move forward.

“I called for [the committee], and I made it very inclusive with everybody that I thought [the entertainment district] would affect,” Tyner said. I thought it was great. It was healthy conversation, a great debate, and if anything goes on from here, I can’t say. There was the feeling that most people wanted it, but there were still so many unanswered questions.”