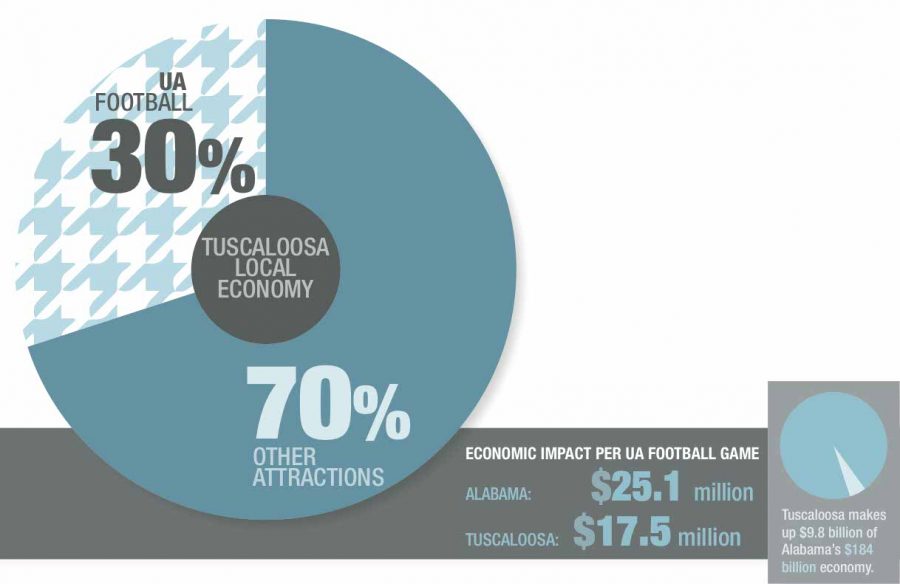 It’s no secret that University of Alabama football provides a significant boost to Tuscaloosa’s economy, but it may not make up the percentage of the city’s income that most people would think, Tuscaloosa Tourism & Sports Commission CEO Susan West said.

“UA certainly is the driver of tourism spending, but it’s not all football,” she said. “Football itself [represents] about 30 percent of the total tourism spending in our city.”

Football brings in an average of $17 million to the local economy per game, West said. However, most tourism revenue comes from home games, which only represent seven of the year’s 52 weeks.

“It depends on how you look at it,” she said. “Thirty percent from seven weekends is pretty huge, but there are 45 other weekends that are generating 70 percent.”

“All activities that draw visitors to the local area have a significant impact on the local economy,” Ahmad Ijaz, an economist with the Center for Business and Economic Research, said. “The only difference is that football draws a significant amount more.”

“Alabama’s economy is about $184 billion, and the size of Tuscaloosa’s economy is around $9.8 billion,” Ijaz said. “So the football games and the University in general do have a significant impact on the economy.”

A recent study by Ijaz and Sam Addy, associate dean for research and outreach, estimated that visitors brought in $122.9 million during home games in the 2011-12 school year. Other UA athletics, including swimming, baseball, basketball, gymnastics, softball and swimming, were conservatively estimated to have had a $5.8 million impact on the Tuscaloosa area.

In the 2012-13 school year, the University made about $89 million in revenue from football, $13 million from basketball and $7.5 million from all other sports combined, according to the U.S. Department of Education. Together, revenue from UA athletics totaled approximately $143 million.

Some gameday earnings spill over to nearby cities. About 80,000 people come from out of town on a gameday, yet there are only 3,000 hotel rooms in Tuscaloosa, West said. People unable to reserve a room in Tuscaloosa stay in hotels in neighboring towns or drive home the same day.

“That’s the main moneymaker for us, really,” Elkaffas said. “Typically, August to December is our peak season.”

He said while weddings, family reunions and corporate meetings bring in a large amount of business during the spring, the Hotel Capstone still makes more money in the fall.

While gas and lodging are some of the biggest expenditures on gamedays, West said restaurants benefit the most financially.

“When I look at our numbers tourism-wise, restaurant spending is almost three-to-one to hotels,” West said. “When you think about [it], you could put two people in a [hotel] room, you’re still paying that one rate, whereas both people are going to eat. And everybody that comes is not staying overnight.”

Matt Leverett, assistant manager at Mugshots Grill & Bar, said his restaurant is busier during home games than the rest of the year but that it doesn’t necessarily make more money in the fall than it does in the spring.

“There are more spring sports going on,” Leverett said. “We get a huge boost from gymnastics, softball, baseball, men’s tennis, swimming and diving. It all draws in a good crowd in the springtime. Our biggest days are on gameday Saturdays, but as a whole, if you compare the two quarters, they come out pretty evenly.”

While gameday rules Tuscaloosa in the fall and constitutes a third of the city’s tourism dollars, West Tuscaloosa still has more to offer than football alone.

“Football is certainly a crown jewel for us, but I think there are so many other things going on in Tuscaloosa that merit us as a wonderful city to visit,” West said. “We’re more than just seven weekends.”