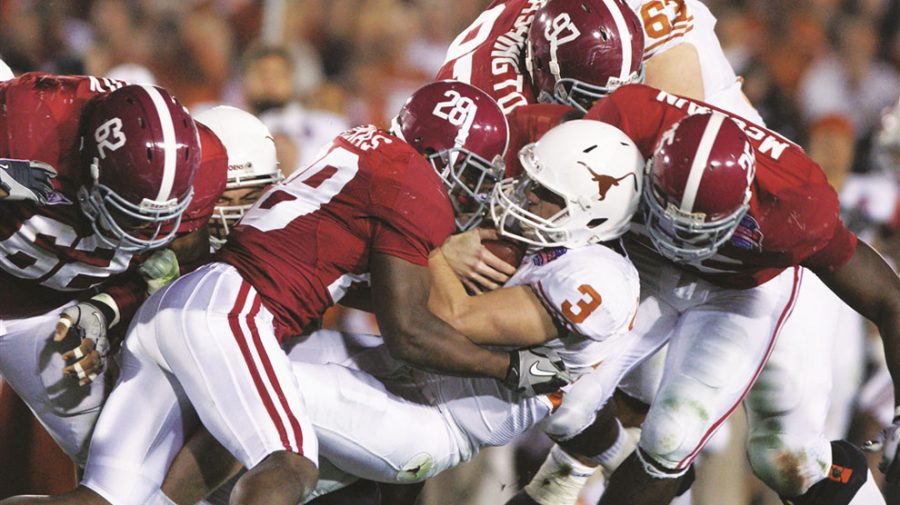 If this were a novel, it would never make it to the shelf. It would be too cliché, lost among thick piles of other stories with resolved conflict and happy endings.

But the cliché found its way into reality this season when the seniors donning crimson at The Rose Bowl on Jan. 7 hoisted the crystal ball into the air.

The journey of Alabama’s senior class is not one many have the chance to experience – a four-year voyage that undergoes more change than any halftime adjustment could make, and one with an ending too perfect to believe.

“I was coming to Alabama regardless of football,” said long snapper Brian Selman, who made the team as a freshman via a walk-on tryout. “For it to end up in The Rose Bowl winning the national championship is certainly surreal to me. I’ll never forget the way it felt on that field hugging everybody… Those are feelings you can’t find a lot of places in life.”

The mood wasn’t always that pleasant, however. This senior class’s career at Alabama began with a 6-7 freshman year in 2006 that included the termination of head coach Mike Shula before the season finished.

Even in the aftermath of a losing season, athletic director Mal Moore found optimism, and its name was Nick Saban. Bringing in a former national championship coach stirred up more excitement about Crimson Tide football than Tuscaloosa had seen in a long time, as evidenced by that April afternoon in 2007 when the Bryant-Denny Stadium staff turned people away because the 92,000-seat stadium was too packed to allow any more fans to watch Alabama play itself.

But Saban did more than add pep to fans.

“Coach Saban brings this intensity that I never saw in anybody else I’ve encountered in my life,” punter P.J. Fitzgerald said. “The intensity [within the team] rose when he got here… Saban brings an extra spark to the game.”

Even with Saban, however, the 2007 season was one to forget. On top of the textbook scandal that eventually led to the vacation of five victories during that season, Alabama embarrassingly found itself on the wrong end of a 21-14 score against Louisiana Monroe on its own home turf.

“I think we had gone through a period of time where we thought we were Alabama, and some things were happening simply because of the color of our jerseys and the people that Alabama used to be known for rather than having to pay the price to live up to that reputation,” Selman said.

Louisiana-Monroe wasn’t the only bad loss for the Tide that season. Alabama finished the regular season with four losses, including its second straight to Mississippi State and its sixth consecutive to rival Auburn.

Even someone like senior nose tackle Terrence Cody, who did not join the team until he transferred from Mississippi Gulf Coast Community College the following year, was not naïve about the magnitude of those losses.

“There were a lot of teammates who were there before I got there telling me how embarrassing it was to lose to those teams,” Cody said. “It certainly was a wakeup call for us, saying the things that we were accustomed to weren’t acceptable anymore,” Selman said. “We couldn’t operate like that anymore, and it just allowed us to further buy into what we had been learning.”

Alabama hasn’t lost a regular season game since. During this senior class’s final two years at the University, the Tide is 26-2, including the 37-21 victory over Texas in the BCS National Championship game this past season.

“My first couple years, I struggled as an individual and the team struggled, and every year we just got better and better,” Fitzgerald said. “And there’s nothing better than going out on top. That’s the perfect ending.”