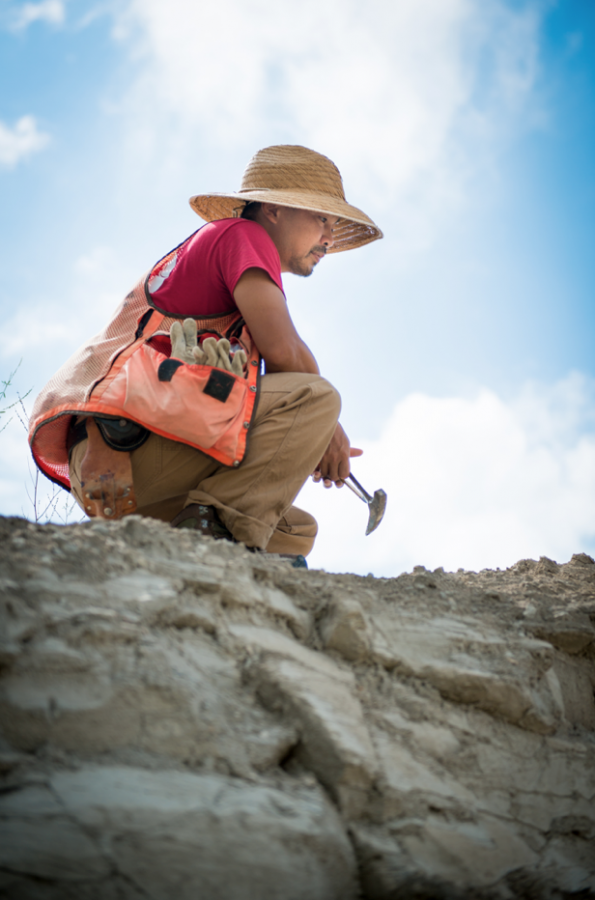 The fossilized skeleton of a large marine reptile that would have lived around 80 million years ago was recently uncovered by University of Alabama researchers.

Dana Ehret, a paleontologist with the University’s Museum of Natural History, said the remains were of a large marine animal that may have been what the Loch Ness Monster was based on.

Part of the huge creature was first discovered by Noah Traylor, a middle school student participating in the UA Museum of Natural History’s 35th annual Expedition in Greene County, Ala., a program for middle and high school students.

“[Traylor] initially found what he believed to be a rock and showed it to the other paleontologist that was out at the expedition, Dr. Takehito ‘Ike’ Ikejiri. Ike recognized that the rock was actually bone and asked where it was found. When Noah showed him, others started finding more bone,” Ehret said. “So, while Noah was the first to find a piece of it, dozens of children, undergraduate, graduate and staff members helped unearth the fossils. It was a real team effort. Noah’s name will definitely be kept with the specimen however, as he was the one who originally found it.”

Also part of the excavation team was Ikejiri, a professor with department of geological sciences, members of the museum staff and some UA geology students.

The remains were later identified as part of a large neck vertebra of an elasmosaur, a subgroup of the plesiosaurs identified by their immense size. Plesiosaurs lived during the Cretaceous period, which ended 65.5 million years ago, and were extremely large, ranging around 45 feet long with very long necks.

During the late Cretaceous period, the warmer global temperature meant that sea levels were higher and extended all the way to the Black Belt region of Alabama. Only two elasmosaurid specimens of this size have been found in Alabama, with the first being discovered in the late 1960s.

Other fossilized pieces of fish, scales and shark teeth were also found at the site, and Ehret said the collection will help researchers better understand the ecology of Alabama 80 million years ago.

“There is no doubt that elasmosaurs are rare in Alabama; however, in other parts of the country (and world), they are much more common. So while it is a big deal for us, I would suspect paleontologists in Kansas, where they find more specimens, might not think of it the same way,” Ehret said. “Dr. Ikejiri and I are investigating the new material along with other fragmentary plesiosaur bones and teeth to try and figure out what species we actually have. There is very little of this material known from Alabama, so we do have to start from scratch.”

Ehret said digging at the site has currently been suspended, but the 20 or so vertebrae and other fossil pieces that the excavation team uncovered have been transported to the UA Museum lab.

“We think that for now at least, we have collected all of the material that was near the surface,” Ehret said. “We will definitely go back and check the site in the future, but we are pretty confident that we’ve collected a majority of what was there. The next step is the preparation and study of the material.”

The bones were first kept where they were found in the earth until they could be safely removed. The pieces were then carefully transported to the museum at Smith Hall and wrapped to prevent them from falling apart.

Once the fossil pieces reach the paleontology lab, remaining sediment is carefully removed from the bones. The pieces of the fossilized creature will be hardened and prepared over the next few weeks to eventually go on display at the museum.

“It will probably take tens to maybe hundreds of hours to prepare all of the bones, glue pieces back together, harden them and have them ready for display and study,” Ehret said.