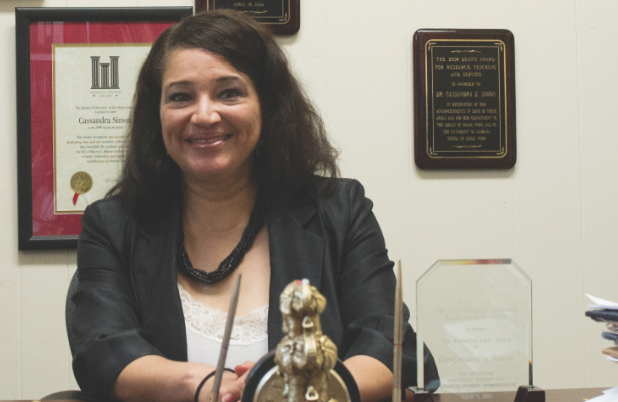 Cassandra Simon will give the seventh annual Last Lecture presentation Monday at 6 p.m. in 159 Russell Hall.

The Last Lecture is a lecture series started by the UA Graduate School in 2007 to provide an opportunity for students to nominate and select a University of Alabama faculty member to give a final lecture as the school year winds to a close. The series operates behind the prompt, “If this were your last time to address a group of students, what would you say to them?”

Simon, an associate professor in the School of Social Work, has been a finalist for the Last Lecture multiple years. Vicky Carter, a third year doctoral student in the School of Social Work, said she is one of many students who nominated Simon for Last Lecture every year since the series began. Carter said she nominated Simon because of her ability to engage students and for the passion she shows in her work and her teaching.

“I’ve been a student in her classes and worked with her as a TA,” Carter said. “The class atmosphere is unique. It’s one of respect and feeling valued. She not only shows expertise in the content, but also encourages students to seek meaning and self-evaluate. She is interested in your reactions, thoughts and ideas about the subject matter.”

Michelle Fuentes, a doctoral candidate in political science and a selection committee member since 2010, said Simon stood out year after year because of her fire and passion shines through her students’ nominations.

“Dr. Simon has been a finalist several times, and the students who nominate her always rave about her passion for research and especially for our community,” Fuentes said. “She has a very compelling story to tell, and it’s especially poignant that she will be the first African American woman to give the Last Lecture with this being the anniversary of integration at UA.”

When she first heard that she had been chosen this year, Simon said she laughed because she had been just a finalist for so many years.

“I think I’m glad it turned out this way though, because it’s the anniversary of integration here on campus and of some of the events of the civil right movement,” Simon said. “Those are issues that I’m really passionate about, so I guess it’s good that this came when it did.”

Simon said her speech will deal in large part with the idea of self-actualization, which she said is one of the highest forms of human activity. Her speech will also deal with campus issues and how students spend their time at the University.

“A lot of times young people think, ‘Oh, I have a lot of time to figure it all out,’” she said. “I want them to see that what they do with their time right now matters, because we never know just how much time we’ll have.”

The speakers, who have included Utz McKnight and Pulitzer prize winner Rick Bragg, are selected through an intensive process beginning with a nomination from students, faculty, or even alumni, and ending with an intensive selection process in a student committee. This year’s committee was made up of seven students, undergrads and graduate students, who each read through two or three hundred nominations of about 100 words each.

“Originally the Graduate School created the committee to chose the speaker, but then after they had been chosen and given their lecture, each professor got to appoint a student to the committee to serve for the rest of that student’s tenure at UA,” Fuentes said.

The selection process becomes more intense after the committee has narrowed the field down to 12 to 16 semifinalists. After talking with the students who nominated the professors and researching them and their work, the committee tries to bring the number down to around six.

“When it gets to those six to eight semifinalists, we get very serious into finding out as much as we can about these professors,” Fuentes said. “Each finalist is assigned two committee members, and we go out and talk with their students, we observe one of their classes, and try to at least have one meeting with them.”

Fuentes said the amount that they learn about the candidates makes it hard to pick a single professor because they all have only good things to be said of them.

“It’s really very difficult to go in and have to choose one out of this group because really it could go to any of them, but we have to come to a unanimous decision, so we spend a lot of time discussing,” Fuentes said.

Fuentes said the Last Lecture series is intended to provide students with an opportunity to learn something they wouldn’t be able to in the classroom, and she said she believes Simon will do just that.

“These are always entertaining speeches because these professors are all just rock stars,” Fuentes said. “They provide a unique world view, and it teaches you a lot about life, and yourself.”

Carter said she expects that the lecture will be just what those who have taken her classes would expect.

“Her discussions are not tied to what is in a textbook or article, but rather she offers real life context to the topic,” Carter said. “Because of her years as a practicing social worker, she can share experiences to enrich discussions that lead to more questions and more discussion. I think she will connect with the audience like she connects with her students in class by sharing her genuineness, humor and passionate determination to making sure everyone has a voice. It will be an uplifting and inspiring event.”

For Simon, it comes down to an opportunity to impact students, which is what she has always been passionate about.