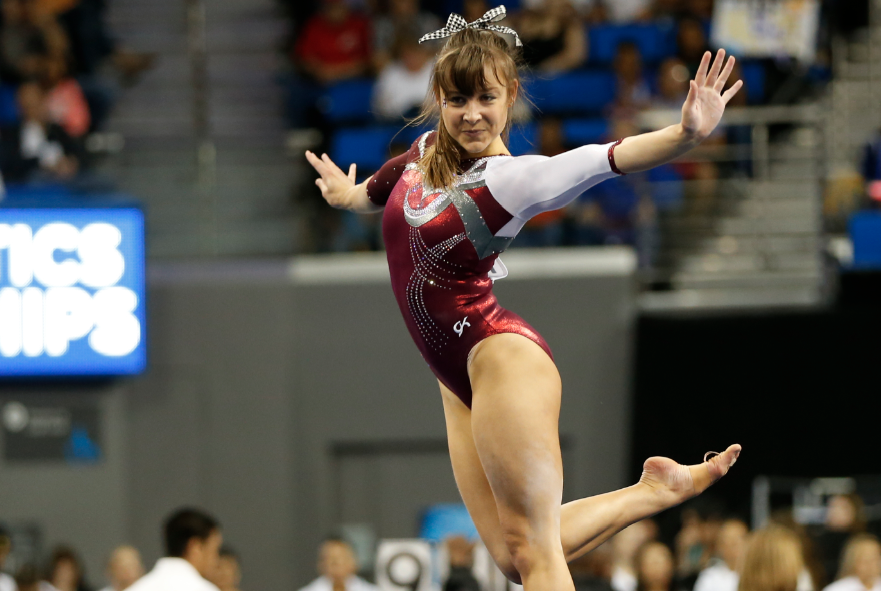 For the third year in a row, the NCAA Gymnastics Championships came down to the last rotation with Alabama locked in a tight battle for the title. After winning the NCAA Championship in 2011 and 2012, the Crimson Tide came up just short in its bid to three-peat Saturday night in Pauley Pavilion on the UCLA campus, scoring a 197.350 to take third behind the Gators (197.575) and the Sooners (197.375).

“I give credit to the Florida Gators,” UA Head Coach Sarah Patterson said. “I have had them at the top since the preseason poll and they’ve been the best all season. We gave them a run for their money at the SEC Championships, coming up just short and we gave them a run again tonight, coming up shot on the balance beam.”

“Our goal every year is to be on the floor of the national championships on the last night, with a chance to win,” Patterson said. “Tonight we had that, and even when we had some adversity, our ladies never stopped fighting and I’m very proud of that.”

“I wouldn’t trade this group for anything,” Patterson said. “They have worked so hard all season long to be at this point and I told them that no matter if they’re first, second, third, because of their work ethic and spirit, they are champions.”

After starting strong with a pair of 9.875s from junior Diandra Milliner and sophomore Kaitlyn Clark on the balance beam, the Tide’s next two gymnasts stumbled, effectively taking the Tide out of the hunt. Despite that fact, Alabama finished the rotation strong with junior Kim Jacob and fifth-year senior Ashley Priess posting back-to-back 9.925s. Alabama’s 49.225 tied for the second highest balance beam total of the night.

Alabama started the night strong with a 49.5 on the floor exercise led by Jacob’s 9.95 and Milliner’s 9.925 as well as a trio of 9.875s from sophomore Lora Leigh Frost, freshman Lauren Beers and junior Sarah DeMeo.

“It was two nights of pressure packed competition,” Patterson said. “It was like going through the Super Six two nights in a row.”