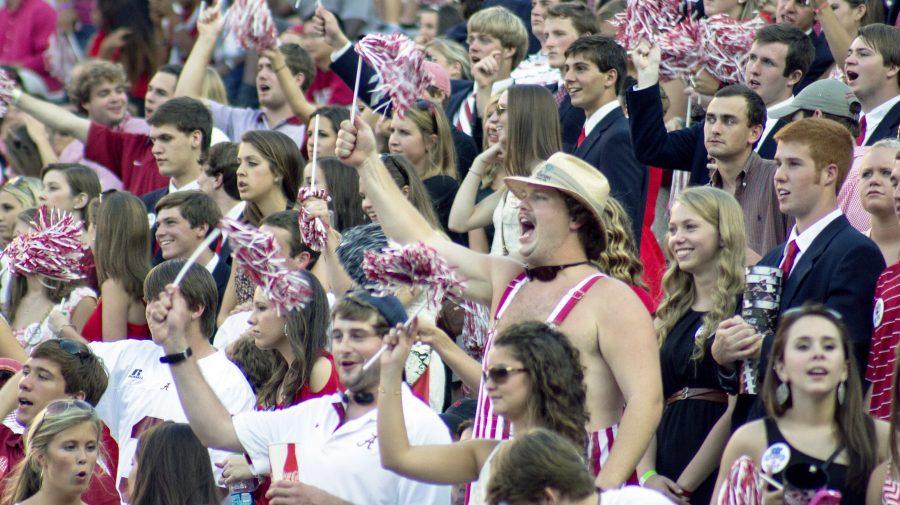 Both Pi Kappa Alpha and Delta Tau Delta lost their block seating in the wake of last week’s suspension of IFC pledgeship, according to a press release received by The Crimson White on Thursday.

Mark Nelson, The University of Alabama vice president for student affairs, said that Pi Kappa Alpha and Delta Tau Delta’s block seating privileges were revoked after both groups were referred to Judicial Affairs.

Tim Hebson, dean of students, said in an emailed statement that the seating areas in the stadium that had originally been allocated to Pi Kappa Alpha and Delta Tau Delta would now be open to all students.

Hebson said saving seats in this section will not be allowed or tolerated, and any student groups, greek or otherwise, who do will be referred to Judicial Affairs.

“No one can save seats in this new open seating area. It is open seating, just like the areas outside the student organization seating area,” Hebson said. “The University will refer groups to Judicial Affairs for failure to comply with directives of University officials.”

Sigma Phi Epsilon president A.J. Collins said he doesn’t think the fraternities will listen to these directions from the University.

“More than likely, fraternities will attempt to sit in their vacated sections,” Collins said. “Historically, I’ve seen fraternities banned from block seating, but that did not deter them from saving seats there.”

Collins said he believes Delta Tau Delta and Pi Kappa Alpha are both deserving of losing their student organizational seating in the wake of the hazing allegations last week.

“I think that organizations that violate the Capstone Creed in regards to fairness and honesty should be reprimanded accordingly,” Collins said. “Losing seating is a fair punishment, as long as Judicial Affairs has investigated fully.”

Emily Nieman, president of Blount Student Organization, also said she believes this is an appropriate punishment for the fraternities facing judicial repercussions.

Although Blount Student Organization did not apply for student organizational seating because they prefer to sit closer to the 50-yard line, Nieman said she feels all students should be comfortable sitting in these vacated seating blocks.

“I feel like football seats are football seats,” Nieman said. “Other students should feel comfortable sitting there, and most likely will fill up the section simply because of the high demand for seats in the lower bowl in general. I feel as though it is too late in the football season to have other organizations to be evaluated to fill these seats.”

However, Collins said he does not think non-greek students are going to feel comfortable sitting there.

“Non-greek students will likely feel uncomfortable sitting in these sections, and I think it’s fair to say no one wants fist fights in the stands between members of any organizations over seats,” Collins said. “I imagine that some fraternities will move forward into these newly vacated sections.”

Looking forward to next year’s student organization seating application process, Hebson said no final decisions have been made regarding Delta Tau Delta and Pi Kappa Alpha’s ability to apply again.

“The groups involved are going through the judicial process,” Hebson said. “That decision has not been made [regarding the groups’ ability to apply again].”

Collins said he believes if the organizations prove that they have reformed themselves, they should be able to apply again next year.

“If they have been reformed, I absolutely think these organizations should have the ability to apply next year,” Collins said. “That will start by taking internal actions against those who lost their seating in the first place.”

Nieman said any previous judicial actions taken against an organization applying for organizational seating should be considered.

“The committee that selects which organizations receive seats should take into consideration the previous judicial actions taken against the organization, greek or otherwise,” Nieman said.

Neither fraternity president could be reached for comment by press time.