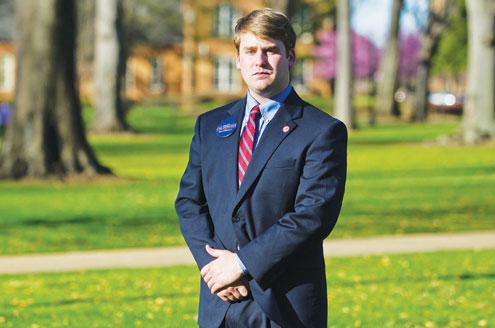 Matt Calderone, one of the candidates running for the office of Student Government Association president, said Sunday that his life experience, three years of service in the SGA and his strong relationship with officials of the City of Tuscaloosa and UA administrators make him the best option for the position.

Calderone presented ideas for programs to better campus and said the first issue to tackle would be the University’s lack of unity.

“Our biggest issue, in all honesty, and it’s kind of cliché, is our unity,” Calderone said. “We should be working more together. It’s a problem when you have organizations kind of working all by themselves, and no one reaches out to them, and they don’t necessarily have the time to reach out to someone else.”

Calderone suggested setting up a delegates program with organizations, and minority organizations in particular, that would have a senior delegate and a freshman delegate from each organization who would meet with Calderone once a month and reach out to student government for whatever the group needed.

Calderone is also campaigning on revamping campus safety and suggested a text message program through which students could text UAPD when they left buildings at night, and if they didn’t follow up within an hour, UAPD would begin efforts to locate the student.

Calderone said he was the Machine-backed candidate for president, but it was not an endorsement he solicited or supported.

“The reason I wasn’t more direct with the question [when asked in February if he was the Machine candidate] – I wanted to separate myself and give people the chance to get to know me as someone else, rather than just a Machine-supported candidate,” Calderone said.

Calderone then said that he did not want the endorsement of any group that was not above ground and acknowledged by UA.

“It’s tough to help who endorses you,” Calderone said. “I’ve never been to those meetings, never been invited, never accepted funding from them. So as far as their endorsement, I’m not looking for endorsement from any organization not recognized by this University.”

Calderone went on to say that the Machine negatively influenced campus, and if and when they distribute lists to fraternities and sororities naming candidates they want elected, he would prefer his name was not on them.

“I can’t control the actions they take. If they chose to put my name on that list because they decided to support me because if they think, as an organization, that I am the best candidate, that’s up to them. I would prefer not to have my name on that list and not to have emails like that sent out. I want these sororities and fraternities, these organizations as a whole, to decide that they want to support me.”

Calderone said his commitment to serving students set him apart from SGA presidents of the past and should counteract any student’s disillusionment with the SGA and its leaders stemming from scandals and controversies in years past.