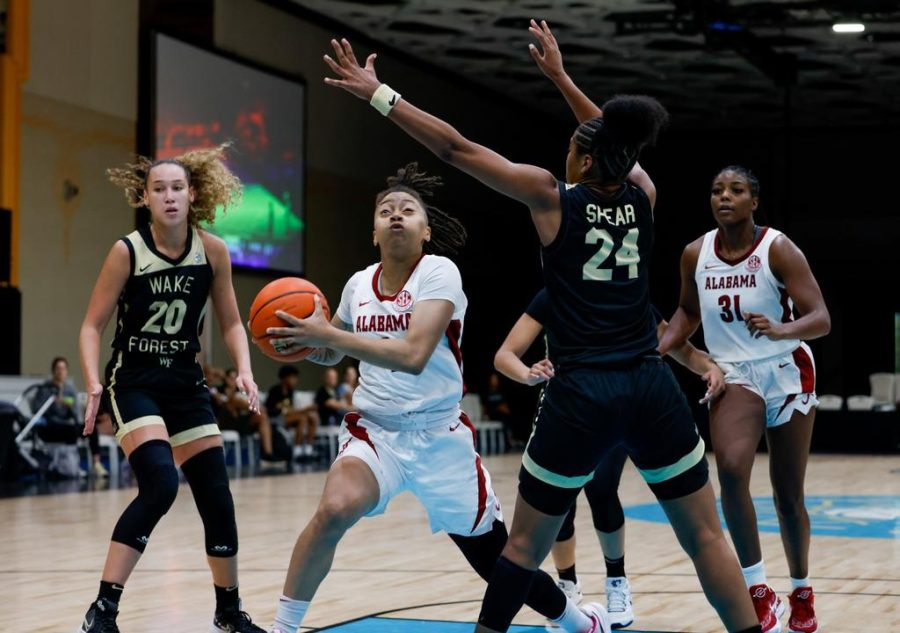 Alabama guard Megan Abrams (1) fights her way to the basket in the Crimson Tide's 61-58 victory over the Wake Forest Demon Deacons on Nov. 23 at the Pink Flamingo Championship in Nassau, Bahamas.

The Alabama women’s basketball team snapped its two-game losing skid with a gutsy win over the Wake Forest University Demon Deacons in game two at the Pink Flamingo Championship.

The Crimson Tide (3-2) went 1-1 in the Bahamas. Wednesday’s final score over the Demon Deacons was 61-58 after a late basket and free throw from Megan Abrams, who scored 14 to lead the team.

In four games away from home since the season-opening win over Alabama A&M University, Alabama is 2-2.

“That’s what really good teams do, is find a way to win games that are a little ugly at times,” head coach Kristy Curry said. “I’ve loved who they’re trying to be. The toughness, the grit, the selflessness. I thought today we were really, really, really selfless.”

Much of the first quarter was a low-scoring affair, with things picking up for Wake Forest (3-3, 0-1 ACC) in the final minutes. After Abrams hit a triple with 2:35 to go in the quarter, Wake went on a 7-0 run and led by eight entering the second stanza.

It did not take the Crimson Tide long to battle back into things, and Alabama tied it with two minutes to play until the half. Jada Rice scored four points in the frame to go into the break, leading Alabama scorers with 10.

“She’s just wanting to do everything she possibly can to grow and get better,” Curry said of Rice. “She has really tried to take some things to heart on how she can really help our team.”

The Crimson Tide wrestled the advantage from Wake Forest in the third, with Brittany Davis accounting for the first three Alabama scores of the quarter. Curry said Davis has been dealing with a cold, yet she still had 12 points Wednesday and 23 on Monday against Utah. It was 48-45 leading into the final quarter.

The last stages of the game were back and forth and had several lead changes. The Demon Deacons made two straight baskets to reclaim the lead, and Alabama responded back with a small flurry of its own. The last time Wake Forest had the lead was at the 51-second mark of the quarter. Hannah Barber hit a jump shot to make it 57-56. The Demon Deacons tied it with 15 seconds to play.

Abrams was the difference — she scored a layup with four seconds left and was fouled, converting on the free throw. The Demon Deacons lost both of their games in the Bahamas.

“We dug deep, got some stops, [and had] a lot of grit there down the stretch,” Curry said. “When you hold somebody under 60 — a team that’s a tournament team from a year ago with one of the best players in the ACC — I just loved who we were on the defensive end.”

When the dust settled, the two teams had shot an identical 23-for-56 from the field. Alabama hit three more from the charity stripe — 10 to Wake Forest’s seven. Both teams had five 3-pointers. Abrams, Davis and Rice all scored in double figures for Alabama. Aaliyah Nye returned to the floor after being injured Monday and had three points.

The Crimson Tide will finally return to Tuscaloosa for its next game. Tipoff against Gardner-Webb is set for Sunday, Nov. 27, at 2 p.m. CT on SEC Network+.