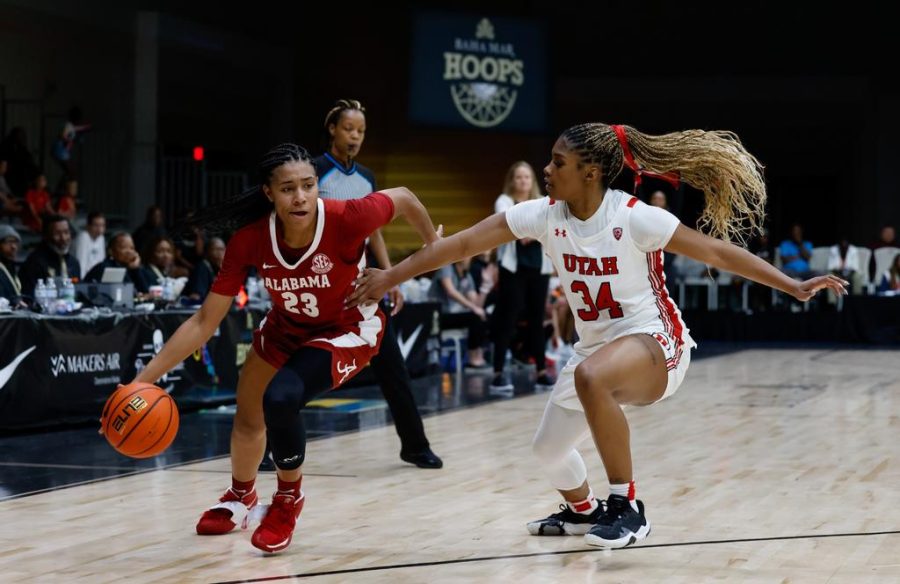 Alabama guard Brittany Davis (23) attempts to drive past a defender in the Crimson Tide's 93-86 loss to the No. 17 Utah Utes on Nov. 21 at the Pink Flamingo Championship in Nassau, The Bahamas

The offensively prolific No. 17 Utah Utes scored enough to hold off the Alabama women’s basketball team in its opening game at the Pink Flamingo Championship.

“I loved our team today,” head coach Kristy Curry said. “I thought we did so many good things, to have three more field goals — the difference was the free-throw line.”

The Utes hit 27 of 28 attempts from the charity stripe. Alabama was a respectable 12-of-14, but Utah more than doubled the free throw output in the game.

“Anytime they make more free throws than you shoot, it’s really, really hard,” Curry said. “We have to be a little more disciplined.”

Illinois transfer Aaliyah Nye made her first start in an Alabama uniform and had 17 points before she went down with an ankle injury in the third quarter. She made six shots, with five triples.

“I thought Aaliyah Nye being lost for the game hurt,” Curry said. “She’s been hampered by an ankle, and hasn’t been herself, the last three weeks. [She’d] gotten it better, and now we’re back to that scenario, except it’s the opposite one. When she’s healthy, that’s who Aaliyah Nye can be. Disappointed for her. She is just tremendous to coach every day.”

Nye was part of a first-quarter statement by Alabama, which put up 31 and led by eight at the end of the frame. Against Utah, which has only had one game this season in which it scored fewer than 90 points, such an output was vital for the Crimson Tide’s chances to win. Alabama led 52-48 at the half.

Alabama had four players score in double figures on Monday — Nye, Brittany Davis, Loyal McQueen and Megan Abrams. Davis led all scorers with 23 after being held to just five points on Nov. 16. Utah’s Gianna Kneepkens led her team with 21 points.

In the late stages of the third quarter, Utah wrestled the lead back from Alabama after trailing the entire game. The Utes took a 66-65 advantage with 2:38 left in the quarter. The Crimson Tide had led by as many as 11. The Utes made a half-court buzzer beater, courtesy of Isabel Palmer to end the third quarter up by seven.

Alabama trailed by double digits in the final frame but battled back to make it a five-point affair with 70 seconds remaining. The Utes, who came alive in the second half with 45 points to Alabama’s 34, were able to protect the lead and win the game.

“I thought we missed a couple of threes that they made late,” Curry said. “We’ve got to have more of a presence defensively, at times.”

Alabama will have a short turnaround before playing Wake Forest University in game two in the Bahamas. That game is set for Wednesday at 10 a.m. CT.

“The thing that’s such a blessing about the game of basketball is it keeps giving, and you keep getting an opportunity to play. We’re going to play a really good Wake Forest team,” Curry said.