No. 1 Alabama beats No. 13 UC Irvine to move to national quarterfinals 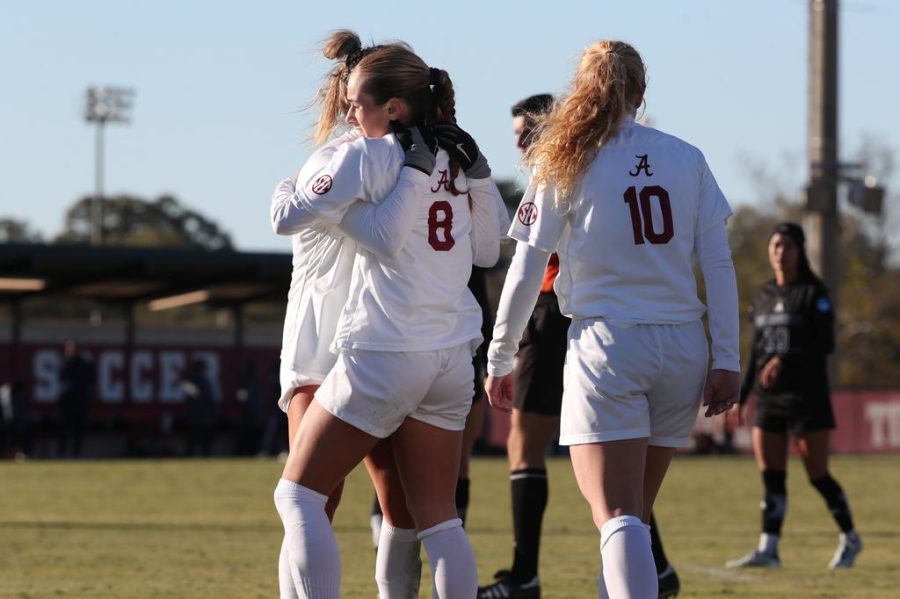 Alabama midfielder Felicia Knox (8) is hugged by Ashlynn Serepca (19) in the Crimson Tide's 3-1 win over the UC Irvine Anteaters in the Sweet 16 of the NCAA Tournament on Nov. 20 at the Alabama Soccer Stadium in Tuscaloosa, Ala.

The top-seeded Crimson Tide (22-2-1) beat the No. 13 seed University of California, Irvine Anteaters 3-1 on Sunday afternoon to claim victory in the Sweet 16. UC Irvine fought for a third straight NCAA Tournament upset but couldn’t get it done against the No. 1 seed.

The first half came and went with no score, just like Friday’s match against Portland. Alabama had good looks and didn’t convert. UC Irvine’s defense proved stout and, for the first 45 minutes, up to the task of keeping the Crimson Tide’s offense at bay.

It was another physical contest in the third round. The first half ended with 14 fouls between the two teams, and there were some pushes and shoves that didn’t get a whistle.

In the second half, Alabama finally broke through in the 55th minute when Felicia Knox kicked a corner all the way into the net. Sunday was not the first time Knox, the SEC midfielder of the year, has pulled off this feat. She also did it against Ole Miss on Oct. 6.

“Even when things weren’t going our way in the first half, I felt like we still tried to plug away,” Knox said. “Our urgency in the second half really showed.”

From there, the Crimson Tide continued to challenge Glo Hinojosa in the Anteaters’ net. Ashlynn Serepca scored Alabama’s second goal in the 59th minute. The UC Irvine defense had been caught in a bad position, and the Crimson Tide’s second-leading scorer capitalized.

The Anteaters did not go away quietly, though. In the 65th minute, Suus de Bakker halved the deficit with help from Amber Huff on a corner. If UC Irvine’s Cinderella run was going to end, it wouldn’t be with a whimper. The underdogs kept playing physical, taking chances and trying to stay in it. Alabama goalkeeper McKinley Crone didn’t let another one across.

Knox scored another goal in the 87th minute when she scored a penalty kick goal after taking a foul in the box. That sealed the deal and put a bow on UC Irvine’s 2022 campaign.

“I thought the biggest adjustment we made at halftime was talking about our mentality, coming out with more of an urgency, to get forward, and be dangerous,” Alabama head coach Wes Hart said. “I thought the team did an awesome job [in] the second half. We looked like a team that was hungry to score goals and win the game.”

The Elite Eight has never featured Alabama before. The Crimson Tide is now one win away from the national semifinals.

“It’s almost surreal for me to be a part of the team that’s taken this program to that level,” team captain Kat Rogers said. “Where our team is, culture wise, mentality wise, it’s translating to success on the field.”

Alabama is staying in Tuscaloosa for the quarterfinals. The Crimson Tide will take on No. 2 seed Duke University for a chance to reach the 2022 College Cup.

“It’s us doing what we do best that’s going to win us games,” Rogers said. “The emphasis isn’t as much on [the other team] as it is on [us].”

The Elite Eight matchup between Alabama and Duke will be on Friday, Nov. 25, at 6 p.m. CT.