McClellan, No. 8 Alabama run over Austin Peay in penultimate game of regular season 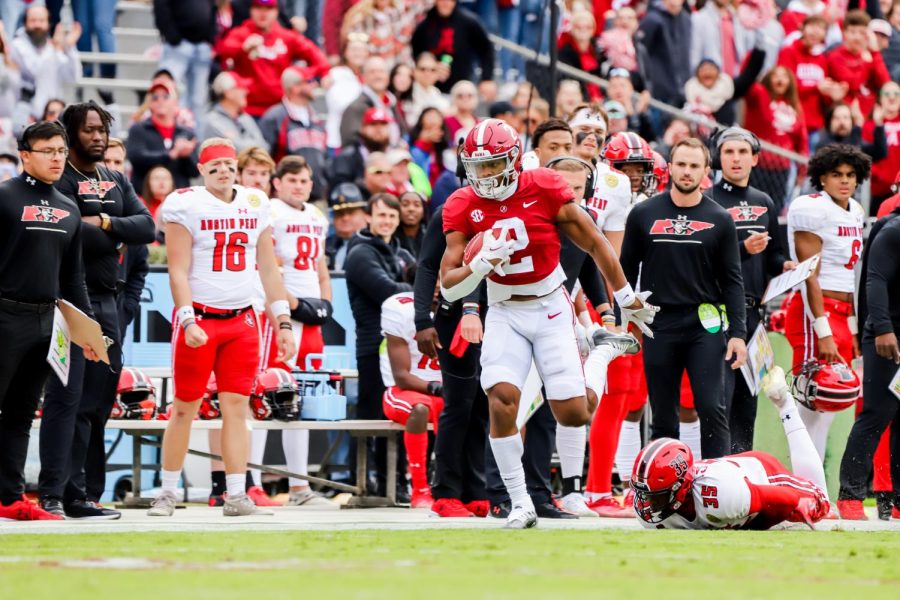 Alabama running back Jase McClellan (2) runs past a defender in the Crimson Tide's 34-0 victory over the Austin Peay Governors on Nov. 19 at Bryant-Denny Stadium in Tuscaloosa, Ala.

It wasn’t always pretty — but what has been for No. 8 Alabama this season?

The Crimson Tide (9-2, 5-2 SEC) was without several starters in its 34-0 win over Austin Peay State University on Saturday afternoon at Bryant-Denny Stadium.

“I was really pleased with the way the team came out and played today,” head coach Nick Saban said. “I thought we controlled the line of scrimmage, had over 500 yards of total offense — they only had [206]. The defense got a couple of really key stops after we turned the ball over a couple of times. It’s always great to get a shutout — [would have] liked to score more points, but we got to play a lot of players.”

“All in all, we wanted to build on the momentum of how we came back and played at the end of last week’s game — obviously that’s something I think we did a good job of today. [It] wasn’t perfect — had some guys out, but other guys got opportunity to get experience. I think that’s probably a good thing for our team,” he said.

One of those players was running back Jahmyr Gibbs, who suffered an ankle injury in the team’s win at Ole Miss last week. His backup, Jase McClellan, shined in Oxford, rushing for 84 yards on 19 carries. His performance played a large part in Alabama’s ability to come away with that win.

It was more of the same from McClellan against the Governors (7-4, 3-2 ASUN).

This time starting from the get-go, McClellan had himself a day in the starting role, piling up 156 yards on 17 carries — scoring twice. As a team, Alabama rushed 45 times for 263 yards.

It was an old school-type game for the Crimson Tide, who won the game by running the football just as well as it played defense. On the way to its shutout, Alabama held Austin Peay to just 206 yards of total offense —147 through the air and 59 on the ground.

The Crimson Tide is near the bottom of the country in turnover differential, and while that will remain unchanged, it was refreshing to see Alabama turn the opponent over. Kool-Aid McKinstry and Brian Branch snagged interceptions, and the Crimson Tide recovered a fumble.

“It’s huge,” linebacker Henry To’o To’o said. “It changes the game — it changes the momentum of how a team is playing and how we’re playing on defense. Three [turnovers] is our goal every single game, so being able to reach that goal was huge for us today.”

The reason the turnover differential won’t change is because Alabama had three turnovers of its own — two fumbles and an interception thrown by Jalen Milroe. It was a relatively slow, but efficient day for Bryce Young, throwing for 221 yards and two scores on 18-for-24 passing. The Crimson Tide was 5-for-12 on third down.

“[Getting the turnovers] was good,” Saban said. “We want to keep emphasizing getting turnovers, but we also got to emphasize ball security. We had three turnovers — one on special teams, one fumble and one interception.”

Only one game remains for the Crimson Tide in the regular season — perhaps the biggest one for Alabama fans.

Bragging rights will be on the line when the Auburn Tigers come to Bryant-Denny Stadium for the Iron Bowl next Saturday. The Crimson Tide has been on top of the rivalry since 2019.

“It’s huge,” To’o To’o said. “We hate them, they hate us. Definitely going to be a huge challenge. The state of Alabama takes pride in this game, and we take pride in it too as Crimson Tide players. We’re looking forward to it.”