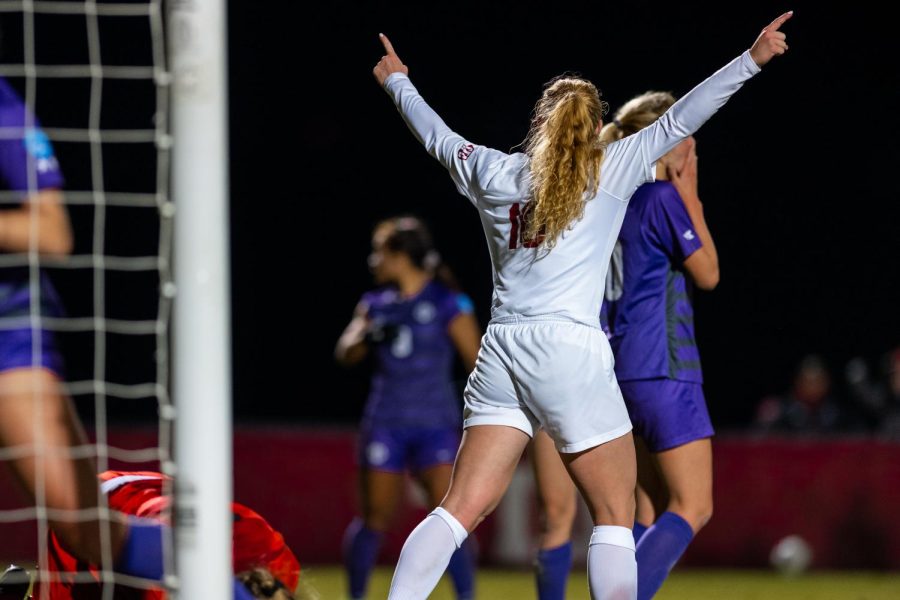 Alabama forward Riley Mattingly Parker (10) celebrates a goal in the Crimson Tide's 2-1 win over the Portland Pilots on Nov. 18 at the Alabama Soccer Stadium in Tuscaloosa, Ala.

A spirited effort from the eighth-seeded University of Portland Pilots was not enough to knock out top-seeded Alabama. The Crimson Tide (21-2-1) defeated the visitors by a final score of 2-1 on Friday night at the Alabama Soccer Stadium.

Alabama has moved on to the third round of the NCAA Tournament for the first time in program history. It took a penalty kick from Riley Mattingly Parker and an own-goal to get the job done. The Pilots’ season ended with one tournament win and a 12-5-4 record.

“Portland was a tough opponent,” Alabama head coach Wes Hart said. “They did a good job of making it difficult for us to create chances.”

“[We have] an aggressive mentality,” he said. “Grittiness and toughness, and just battling, fighting, competing, scrapping — that’s who we are. That’s who we’ve been all year long.”

The first half was a scoreless affair, with six shots taken by the Crimson Tide. In the 20th minute, goalkeeper McKinley Crone was able to ward off one of the Pilots’ best looks of the match with a leaping save. On a cold night, it took the teams a moment to warm up.

Alabama broke through in the 66th minute when Riley Tanner drew a foul in the box. Riley Mattingly Parker set up to take the penalty kick and sent it to the back of the net — off a rebound after Pilots goalie Bre Norris saved the first strike.

“All season up until this week, in practice, my penalties have been great,” Mattingly Parker said. “You can’t let that affect how you approach it in a game.”

“Riley Tanner had a phenomenal game all day,” Mattingly Parker added. “Definitely owe that goal to her.”

Not even two minutes later, Portland drew a foul in the box, and Cally Togiai buried the penalty kick to level things. The war of attrition was back on. It was a physical match at times, and Crone even picked up a yellow card in the 60th minute.

In the 74th minute, Alabama set up to take a corner, and an own-goal resulted and handed the lead back to the Crimson Tide. This time, there would not be a quick tie. Portland took its chances with two shots on goal in the second half, but Alabama held strong to move on.

“We all trust in each other,” defender Sasha Pickard said. “It allows you to play with so much more confidence when you know the girl beside you is working just as hard as you. … I know everyone else on the field can handle it, so I got to handle it for them too.”

Sunday will bring another upstart in the form of the University of California, Irvine Anteaters, who upset the Brown University Bears in the moments immediately preceding kickoff between the Crimson Tide and the Pilots.

Kickoff is set for 1 p.m. CT, with a bid to the Elite Eight at stake.