Opinion | What the midterm results mean 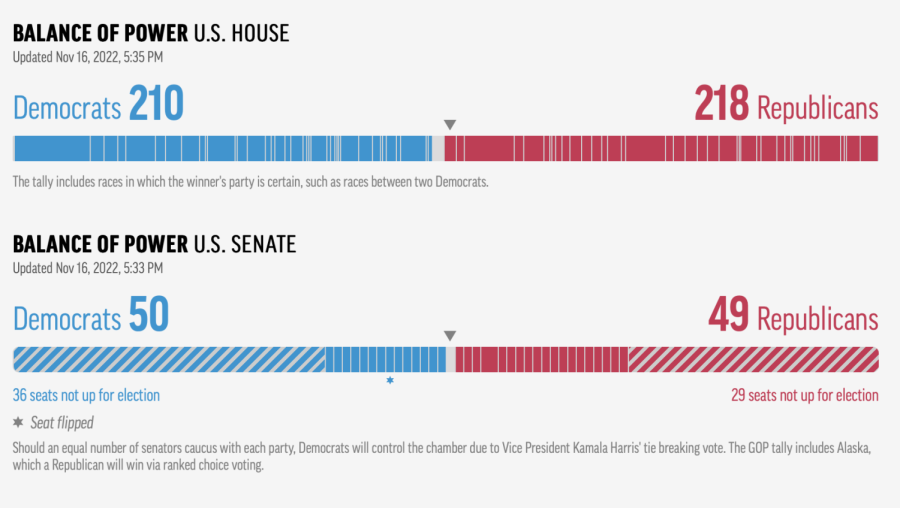 Graphic via the Associated Press

If there was ever any doubt that the United States is deeply polarized, it has been unequivocally dispelled by the midterm elections of 2022. While many races have yet to be called, Republicans have narrowly taken control of the House of Representatives to set up a divided government.

The midterm elections did not go as well for Republicans as they had hoped. Going into election night, Republicans thought the momentum was on their side. Most polling data and election forecasters pointed to a sizable Republican House majority and a real possibility of a Republican Senate majority.

These predictions did not at all materialize. Republicans lost one Senate seat in Pennsylvania and will be lucky to reach more than 220 seats in the House, a body where a majority constitutes 218 or more members. While this majority will likely be slim, so is the Democrat’s majority in the Senate, which will be at most one seat or 51 seats out of 100, including two Democratic caucusing Independents.

In the House, this small majority could spell trouble for House Minority Leader and prospective Speaker of the House, Kevin McCarthy. This is because the House Freedom Caucus, a group of deeply conservative Republican lawmakers, is threatening not to back McCarthy in the speakership race if he does not meet their list of demands. Because McCarthy and House Republicans will have such a small majority, he may have no choice but to capitulate to the more conservative members of his party.

In the Senate, much of the same can be expected. The filibuster, which requires 60 votes to end debate in the Senate, is unlikely to be removed given that two Democrats, Kyrsten Sinema and Joe Manchin, have previously refused any change to this rule. In addition, since the House will no longer be in the Democrats’ hands, ending the filibuster would not be useful for Democrats. They would not risk giving Republicans the power to pass legislation through the Senate in the future without Democrats’ support.

These midterm elections predict gridlock in Washington for at least the next two years. With Republicans in charge of the House, issues like abortion are unlikely to be brought up, and it is doubtful that President Biden will be able to pass any substantial budget bills. However, it cannot be understated that a small number of moderates in the Republican party will hold great power to work with the Democrats to pass some moderate legislation.

Despite the gridlock to come, it should not be understated that this was the first time many young Americans across the country could vote, and it showed. Youth turnout was higher in 2022 than in all but one previous midterm election in the 1970s. This primarily Democratic voting bloc likely put Democrats over the top in many key congressional races.

Although the gridlock may seem unending, young voters should not be disenfranchised by the results of this election. Young voters hold great sway over how the United States is governed.

This election proved that no one can ever truly predict how elections are going to turn out. In subsequent elections, anyone who cares about how the country is governed must vote. The polls are often wrong, and everyone, no matter their political orientation, should never become complacent in their chances of winning because nothing is guaranteed, and no outcome is destined.

Every UA student needs to know that no matter where they vote, their voice matters. The youth vote holds sway over how America is governed, and it is vital that your voice is heard. Always remember to vote.