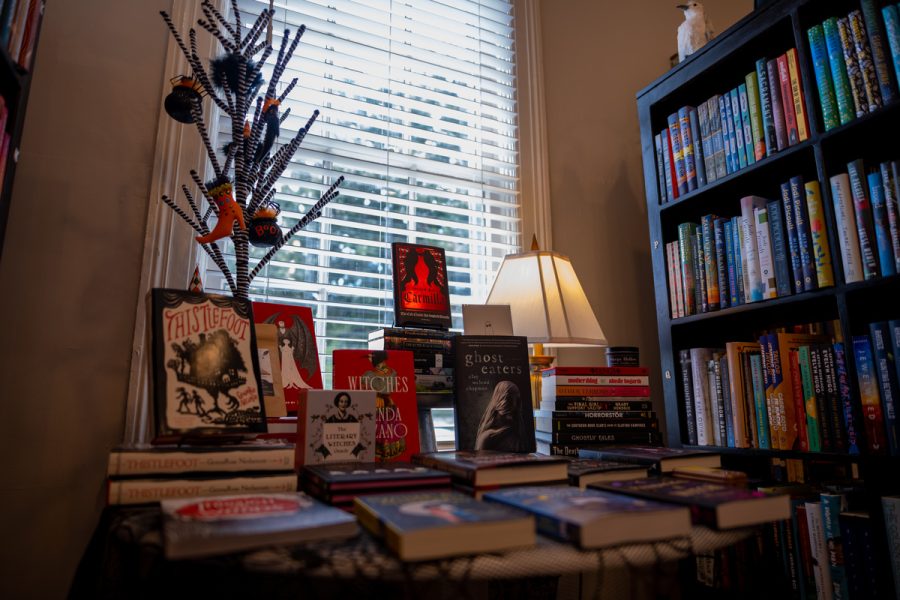 Those in a hurry might not notice Ernest & Hadley; in fact, from the outside, it looks like many of the older houses around downtown Tuscaloosa. However, on the inside, shelves are packed with ever-increasing numbers of carefully curated books.

Ernest & Hadley, the only indie bookstore in Tuscaloosa, is tied to the history of this area, as well as its current community.

“We will be 6 years old on December 11th, but I’ve been in the book industry for 25 years,” bookstore owner Easty Lambert-Brown said.

Lambert-Brown said that even before she got into the book industry, she worked in publishing and designing for nearly 15 years before her bookstore experience.

“You know it’s a personal passion when you go on a vacation, and you plan your route around where the bookstores are,” Lambert-Brown said.

One such vacation inspired the store’s name, which comes from famous writer Ernest Hemingway and his first wife, Hadley.

“My husband and I were in Paris in January of 2016,” Lambert-Brown said. “He likes to, when he goes anywhere, find out where authors lived. So, [the Hemingways’] apartment was in the Left Bank, and we were at Shakespeare and Company, which is a big bookstore associated with him, and he said, ‘Let’s go find their house.’”

Lambert-Brown said the pair not only found the house, but also found a marker inside stating that it was the happiest place in Hemmingway’s marriage.

“I’m looking at the sign and I’m saying, ‘That’s the name of the store!’ He goes, ‘What store?’ I said, ‘We’ll talk about that later,’” Lambert-Brown said.

Because the couple already lived in Tuscaloosa, they set to work looking for the right place to put the bookstore. The current location, a house built in 1924, was easy to find.

However, Lambert-Brown and her husband began hearing noises, such as footsteps and items dropping, when they bought the old house. Believing it to be the wife of the doctor who originally built the house, they eventually called in paranormal investigators.

“We call her Mrs. Brown. And we actually had some paranormals [investigators] come in a couple years ago before COVID … of course, no one appeared that night,” Lambert-Brown said.

Customers will be glad to hear that Mrs. Brown seems happy with the current owners, although Lambert-Brown said that sometimes Mrs. Brown will change the station when she doesn’t like the music.

As far as events are concerned, the store can barely find the space at times. For example, their event for author Wayne Flynt and his new book about Harper Lee on Dec. 1, will be held at the library since Ernest & Hadley wouldn’t fit everyone attending the event.

“Sometimes we have it down at Monarch, or Harrison Gallery, or Bryant Bank even because they have a big place upstairs. We thought about moving but we would lose the quaintness of this building, so we decided to have the events in a bigger setting,” Lambert-Brown said.

In fact, the store recently held an event for University of Alabama professor of anthropology Christopher D. Lynn for his new book, “Transcendental Medication: The Evolution of Mind, Culture, and Healing.”

“There’s several opportunities for you to save money on a book if you’re one of our Team Hadley members. It’s a membership program, and you spend $20 a year and you get a 15% discount off every book,” Lambert-Brown said. “We also have a subscription service for middle grade and picture book readers.”

Ernest & Hadley is a family business, and Lambert-Brown plans on transferring ownership to her daughter at some point in the future.

Ernest & Hadley is also always looking for ways to get involved in the community. The Girl Scouts are going to hold a pop-up shop at the store in January to sell their cookies. Additionally, Ernest & Hadley were at Kentuck Festival of the Arts this year at the festival’s Windham Stage, where they sold books.

The store is always trying to create awareness, as it still sells to first-time customers.

“We’re still hearing, even after six years, ‘We didn’t know you were here,’” Lambert-Brown said.

Of course, at this point many students know about the store and have returned countless times for their favorite genres.

“The experience was lovely,” said Max Meirhaeghe, a freshman majoring in marketing. “It was organized and felt very cozy and homely. The worker was friendly, and I enjoyed being able to go to a less populated bookstore.”