Volleyball falls to No. 12 Florida in SEC opener 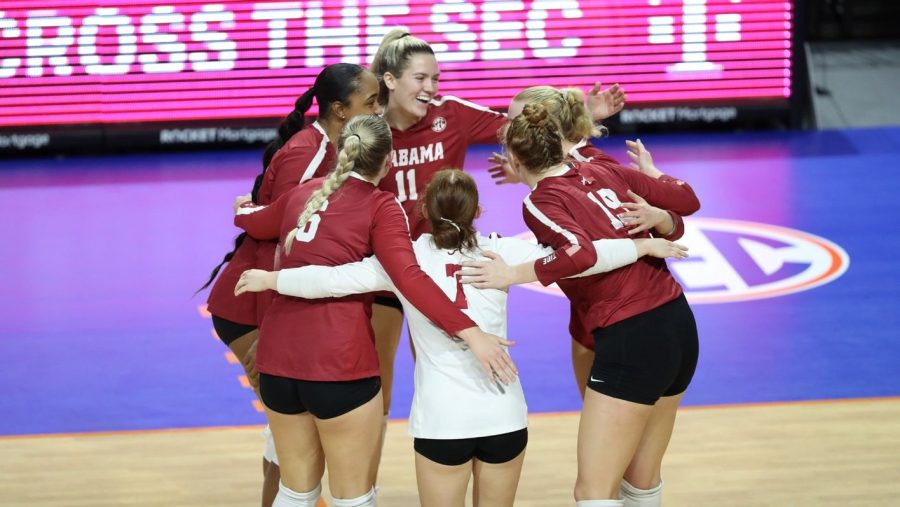 Alabama volleyball players gather together after a point in the Crimson Tide's loss to the No. 12 Florida Gators on Sept. 21 at Exactech Arena in Gainesville, Fla.

The Crimson Tide got swept in The Swamp Wednesday night, losing in three sets to No. 12 Florida in Gainesville.

“It was a battle throughout the entire match,” outside hitter Kendyl Reaugh said. “It’s tough that we ended it with a loss, but we learned a lot.”

The Gators (9-2) brought a lot of energy back home to their home court after beating then-No. 4 Wisconsin in Madison, but the Crimson Tide (6-7) put up a fight. Their hitting percentage was .152 — low, but higher than Florida’s average opponent hitting percentage, .135. Florida head coach Mary Wise had to call several timeouts throughout the match to break up the Crimson Tide’s momentum.

Alabama head coach Rashinda Reed says she was happy with her team’s performance.

“I felt like we stayed competitive throughout the entire match,” Reed said. “Little adjustments here and there, and that’s major chances for us. I was very proud of how we battled today.”

Florida started off the first set 7-1 with middle blocker Alyiah Wells breaking up the scoring run with a kill to get Alabama’s first point. The Crimson Tide, led by outside hitters Abby Marjama and Reaugh, had a couple of small scoring runs to close Florida’s healthy lead, but they only ever came within three points. The Gators ended up taking the set 25-19.

Once again, Florida led the set. Their offense was led by setter Alexis Stucky, the SEC Player of the Week, who not only set her attackers up, but also directed the occasional trick set over the net to score a couple points of her own.

Down 14-24, a Florida service error prompted a late scoring run from Alabama. At set point, the Crimson Tide managed to add five more points, including two aces from libero Sydney Gholson. Wise called a timeout to break up Alabama’s momentum, and sure enough, the first serve went long, resulting in a 25-19 win for Florida, giving them a 2-0 lead.

The third set started with a kill from Wells — Alabama’s first and only lead of the match. Florida dominated the rest, with over half of their service aces served in the third set. The Gators won 25-17 — winning the final point on an Alabama ball-handling error — sweeping the Crimson Tide in three sets.

Although happy with the overall performance of her team, Reed says she’s still concerned about unforced errors.

“I feel like that’s still one of the challenges we’re working through,” Reed said. “We want to avoid giving our opponents points — we want them to earn it.”

Being swept in three sets is a tough way to start conference play, but Alabama isn’t discouraged. The team went up against a program that has seen over a thousand wins, dozens of NCAA Tournament appearances and multiple SEC conference titles during coach Wise’s 31-year tenure. Compared to that, Reed’s first-ever coached SEC match went very well.

With tonight’s loss, Alabama ends their 10-match road campaign. This weekend, the Crimson Tide finally returns to Tuscaloosa to take on Auburn in the “Iron Bowl” of volleyball.

“We’ve been on a long stretch of away games,” Reaugh said. “It will be very nice to be back in our home gym, in front of all of our fans.”