Nacho Alabamo: How he wrestled his way into UA tradition 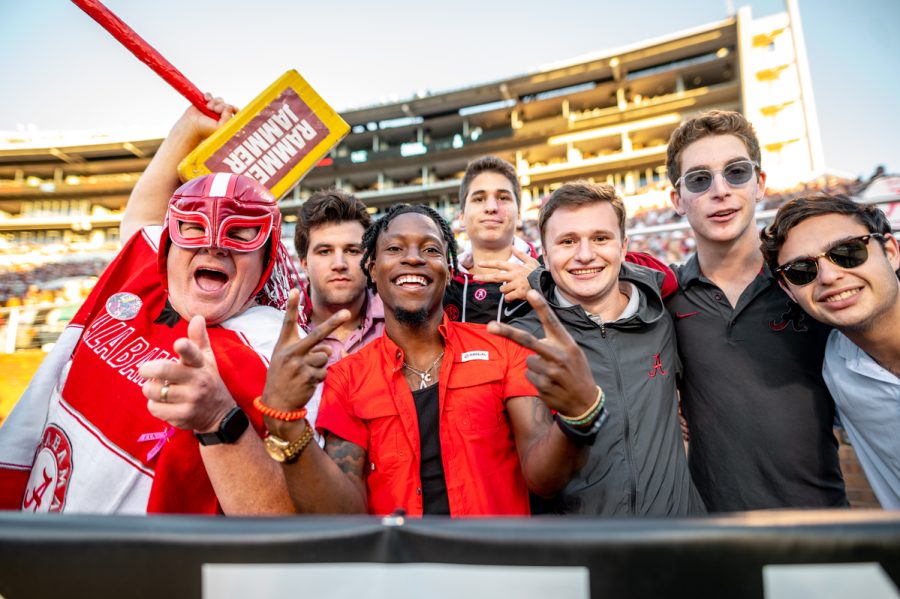 It was 2018 in Costa Maya, Mexico. An excursion was canceled on a cruise, leaving the tourists nothing to do but shop. One man, decked out in Alabama gear, was the perfect target for the local vendors.

After the thrilling 2018 Alabama vs. Georgia national championship, Crimson Tide gear could be found anywhere — including small shops in Costa Maya — and could be anything — including a crimson and white poncho sporting the Alabama Script “A.”

After buying the poncho, the tourist started walking back to the ship, but vendors called out to him, asking if he wanted this Alabama hat, that Alabama poster, anything that had a Script “A.” Only one vendor, though, had a red luchador mask that matched his new poncho perfectly.

And so, Nacho Alabamo was born, in a cruise ship bathroom as he tried on the poncho and mask to show his wife his new game day outfit.

“You can’t wear this to games,” she said.

She eventually relented, though, letting Nacho Alabamo appear in Bryant-Denny Stadium for the first time during the fourth quarter of a home game they both attended in 2018. The next game was where Nacho Alabamo truly came into his iconic role.

“The next game was a cupcake game, one of those games where Alabama was just going to absolutely open up on them, and my wife didn’t want to go, so I was unsupervised,” Nacho Alabamo said with a laugh. “So, I put on all the stuff. I walked around and at first people were very standoffish, just looking at me like I was some weirdo.”

Despite his humble beginnings, Nacho Alabamo is now an essential part of the Alabama game day experience. With the addition of a homemade yellow hammer and a couple of crimson and white shakers, he’s a walking tradition that takes pictures with fans tailgating on the Quad, hangs out with the Million Dollar Band and cheers on the Crimson Tide in Bryant-Denny Stadium.

Namie Franco, a UA junior majoring in microbiology, who’s on the drum line in the Million Dollar Band, said Nacho Alabamo  matches the energy of the band perfectly.

“If I don’t see Nacho, it’s not game day,” Franco said. “I love that he showcases our school spirit and portrays the University so well.”

Although he’s changed the way Tuscaloosa celebrates game days since 2018, Nacho Alabamo hasn’t always been an Alabama football fan. He grew up in the San Francisco Bay Area following the 49ers and never liked college football until he came to the South.

“When I moved to Mississippi, everyone asked me who my team was, and I said the 49ers,” Nacho said. “They said ‘no, college,’ and I’m like, isn’t that just what players play before the NFL? That was not the right answer.”

His wife, a UA alumna, introduced him to Crimson Tide football, but he didn’t feel like a true fan until his son began attending the University. After attending a game with him, it finally clicked.

“I just didn’t understand the amazing effect of college football, the spirit, just everything that makes college football what it is. It just took my breath away,” Nacho said. “I was hooked on Bryant-Denny, just everything. I love Dixieland Delight. I love the Rammer Jammer Yellow Hammer [cheer]. I stay until the end of every game just to be a part of that.”

When he met Terry Saban, Nacho told her the next signature he wanted was her husband’s.

Although Saban hasn’t signed the hammer yet, he has taken a picture with Nacho Alabamo during a ‘Hey Coach!’ night at Baumhower’s Victory Grille. Nacho said it’s his favorite picture, but he loves them all.

“I love getting pictures with just anyone. I have people come up to me all the time,” Nacho said. “I look crazy, I look like an idiot, and I know that, but it just cracks me up. It’s just a whole big thing and I love it to death.”

Although Franco plays with the Million Dollar Band every home game, she said she also looks forward to Nacho Alabamo pictures.

“I try to get a photo with him on the Quad every game day,” Franco said. “The Million Dollar Band is founded on creating a sense of school pride, so it’s cool to see someone matching that energy.”

Even Liv Tate, a UA graduate student studying advertising and public relations, recognizes the zeal he brings to game days, despite admitting that she’s not a huge fan of mascots or public personalities.

“I always watch him interact with other people and he gets them pretty rowdy,” Tate said. “I think he’s fun.”

Even though Tate keeps her distance, she said she can tell that his enthusiasm is infectious.

“It seems like he’s having a good time,” Tate said. “He makes everybody else have a good time, too.”

For the rest of the Alabama fanbase, Nacho Alabamo’s influence has only grown. This year, he says he has plans to further rile up Crimson Tide fans after noticing that the tradition of holding up four fingers needs a revamp.

“Put Nacho on the big screen in the fourth quarter,” Nacho said. “Why not? Get me up there, I can yell and get people all fired up. I’ll be pushing for that this year.”

Whether he makes it on the big screen or not, Nacho Alabamo has already cemented himself in UA tradition. Between his iconic poses, legendary hammer and trademark poncho, Crimson Tide fans look forward to his presence every home game, even if it’s just catching a glimpse of him across the Quad.

“I hope he sticks around for a long time,” Franco said. “He’s become an icon at this university.”