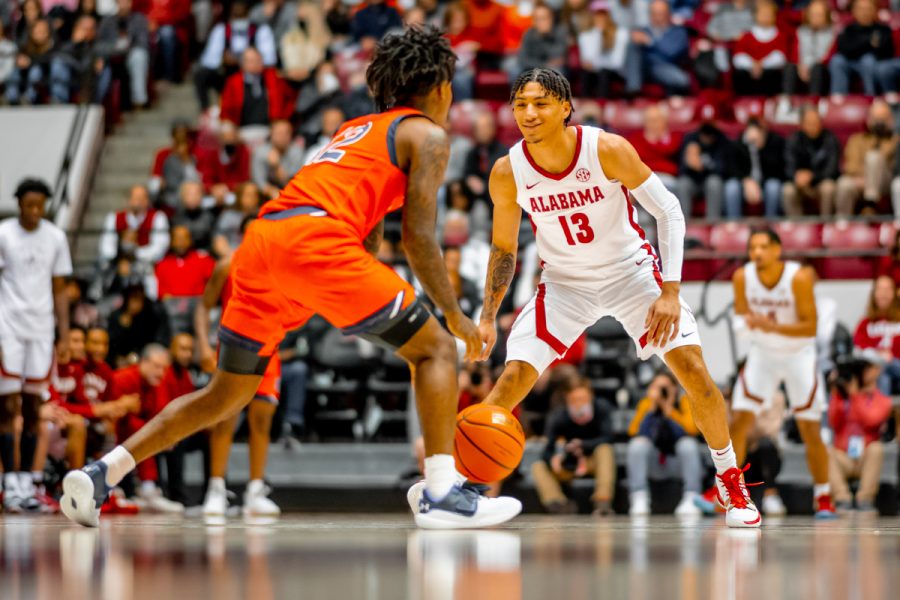 On a cold February evening in 2013, former Alabama head coach Anthony Grant rolled into Auburn Arena, sitting at 14-7 (6-2 SEC). Prior to the game, ESPN’s Joe Lunardi had listed Alabama as one of the first four out of the NCAA tournament. Auburn, under the guidance of head coach Tony Barbee, was in the midst of yet another forgettable season — boasting an 8-13 (2-6 SEC) record. The Tigers had lost six straight, including five straight in the rivalry.

What followed can only be described as a repugnant display of archaic basketball. In what felt like an eternity to those watching, 11 minutes elapsed in the first half.

Alabama led 15-2 early in the game. At this point, a small crowd of 7,502 surely began to question their financial decision making. Mercifully, the game reached halftime.

Behind the play of forward Allen Payne, who scored nine of his 11 points in the second half, the Tigers managed a 23-5 run that first gave them the edge at the 13:38 mark in the second half. They never relinquished the lead.

In the end, the Crimson Tide lost 49-37. And in that moment, any consideration of Alabama for the NCAA tournament was immediately thrown out of the window.

The Crimson Tide’s 37 points were its fewest since a 1960 loss to Tulane. It was also the fewest points scored by either team in the series since 1949.

A little over a year later, Auburn parted ways with Barbee. Shortly thereafter in 2015, Alabama followed suit and fired Grant.

Fast forward to 2022, and the Iron Bowl of basketball, dubbed the IBOB, has been taken to championship-level heights. Two programs battling atop the SEC. Two heavy-weight coaches with polarizing personalities and a knack for success.

Auburn men’s basketball coach Bruce Pearl built a program from the ground up and turned it into a powerhouse with proven Final Four capabilities. Nate Oats took a team sputtering in the abyss of mediocrity and won the SEC tournament within two years of arriving in Tuscaloosa. The dynamic has shifted.

“It’s no longer just a game between in-state rivals — it’s a game between SEC title contenders and high-seeds in the NCAA tournament,” Crimson Chaos president Ethan Lamb said. “That’s the result of two elite coaching staffs. College hoops will be a big deal here moving forward, which excites me as a lover of the sport.”

Basketball in the state of Alabama has never been better — and respect for the other side is soaring to new heights.

“This is a great rivalry because of the fanbases and how everyone interacts,” former Auburn student section president Jacob Hillman said. “Coach Pearl coming into Auburn and leading a program that was on life support just a few years earlier to its first Final Four was obviously the biggest step. Coach Nate Oats has an SEC championship and Sweet 16 under his belt, which shows that both teams are looking to take that next step. The rivalry just accelerates the urgency to succeed.”

“Bruce Pearl has had a lot of success and their fans are excited about it — and they should be,” Passink said. “On the flip side, Alabama fans have always supported this basketball program over the years, and I think with what Nate Oats has done nationally, winning the SEC, going to the Sweet 16, piling on top ten recruiting classes, the future of this program is bright. There’s a lot of excitement about the Alabama program on the Alabama side, and the Auburn program on the Auburn side, and it’s just natural that this rivalry would grow to a place where there’s more excitement surrounding it.”

It’s not all sunshine and rainbows, though. With every rivalry comes a little bit of bad blood, and in the case of the IBOB, there’s perhaps no greater feud on social media.

Within minutes of Auburn’s 81-77 defeat of Alabama in January, Auburn fans replied more than 5,000 times to Alabama basketball’s score tweet with “deep-fried” images — but did the Tigers invent this phenomenon?

“Of course, Auburn invented deep-fried memes, just like Auburn soccer invented LED lights, but I digress,” Hillman said. “All I know is that the memes date back to the 2020 season for Auburn. I’m sure there were deep fried memes prior to that. … I think it’s just part of the fun. You have to walk the walk if you’re going to talk the talk.”

“They did not,” Johnson said. “A ton of fans have done those memes for years. It’s fine that Auburn decided to make that their thing. Hell, even I have been the subject of some of them — but they did not invent them.”

As iron sharpens iron, one program sharpens another. Thomas Edison once said that discontent is the first necessity of progress, and after years of failure and frustration, these two schools have put the country on notice.

Difficult roads often lead to beautiful destinations, and we’ve reached the exit ramp on the highway of insignificance. We’re in for quite the breathtaking ride.