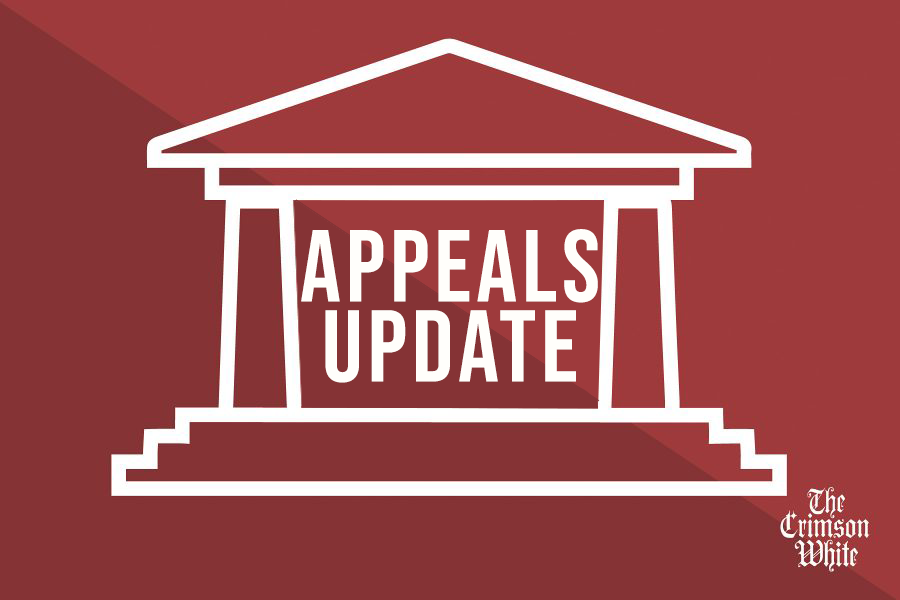 University of Alabama seniors Sarah Shield and Garrett Burnett filed two appeals: one against the Student Elections Board, and one against Student Government Association Attorney General David Strickland. Both appeals refer to the lack of a special Senate election for a vacant seat in the Graduate school.

In the two appeals filed on Sept. 19, Shield and Burnett requested that the Elections Board receive sanctions for the board’s “disregard for the [governing] documents [of SGA].” They asked the Judicial Board to review the appeals and take steps to prevent overreaches of power as well as provide a “final interpretation of Article III, Section 4 of the SGA Constitution.”

Both appeals will be reviewed by the Judicial Board at an unknown date.

The appeals follow the Elections Board’s decision to not hold a special Senate election for the Graduate school seat vacated by former Senator Justin McCleskey, which has been empty since his resignation last April.

Article III, Section 4, Subsection B of the SGA Constitution states that “Special elections for Senate vacancies will be held every twenty full class days beginning from the first day of the fall semester until forty class days prior to spring SGA elections.”

According to the written rules, a special Senate election should have been held on Sept. 14, 20 class days after the start of the fall semester on Aug. 17. A special election was not held. The Elections Board said they did not hold the election due to feasibility concerns, which Strickland further explained in an opinion dated Aug. 22.

Strickland’s opinion provided an interpretation of the Constitution’s language, which the Elections Board said they considered before deciding not to host a special election.

Referring to Article III, Section 4, Subsection B of the Constitution, Strickland wrote that “in this case, the word ‘every’ does not imply that special elections for Senate vacancies should be held every twenty full class days starting the first day of the fall semester up until forty class days prior to spring elections. Instead, it refers to the time period in which special elections for Senate vacancies are eligible to be held each year.”

In their appeal, Shield and Burnett wrote that Strickland’s opinion was misleading and that he “re-wrote the Constitution … using different words which mean different things.”

“As defined by Merriam-Webster, the word will is ‘used to express futurity,’ ‘used to express a command, exhortation, or injunction,’ and ‘used to express inevitability.’ Additionally, the word every is ‘being each individual or part of a group without exception’ and ‘complete, entire.’ …  The definitions of these words provide no room for discretion to be interpreted as they were. Unless the power of the Attorney General also allows him to re-define words, this interpretation is false according to the English language,” Shield and Burnett argued.

They also questioned the decision to not fill the Senate seat as soon as possible and expressed concern about the precedent Strickland’s opinion could set.

“Allowing far-reaching interpretations of the Constitution such as this to stand would be an extremely dangerous precedent,” Shield and Burnett said.

In a response to the Crimson White on Sept. 16, the Elections Board said that a special Senate election will happen and that “information about the timeline will be included in the Special Elections Announcement to be released on Monday, September 26.”

Shield and Burnett said that the Elections Board is at fault for not hosting the special election as the graduate seat in question has remained vacant since McCleskey’s resignation in April.

“They have known since April 1, 2022, 171 days ago, that there was an open Senate Seat, and yet they failed to fulfill one of their only duties,” Shield and Burnett said. “[We] would like to know how many days notice the Elections Board would like in the future if 171 days is not sufficient.”

Shield and Burnett said the Elections Board’s actions are concerning.

“[We] find it quite worrying that the Elections Board was unable to understand the timeline for a special election. Why does the SGA continue to allow an incompetent Elections Board to run rampant with no regard for the governing documents?”

As of publication of this article, the Judicial Board has not convened to discuss the appeal against Strickland or the Election’s Board.

On Sept. 20, Strickland responded to a request from the CW that he had not received any “official communications” about an appeal. Strickland said he would willingly comment further on the matter after he receives notification from Chief Justice Caleb Thome and the Judicial Board.

The Elections Board did not return a request for comment. Justin McCleskey is the Opinions Editor for The Crimson White.