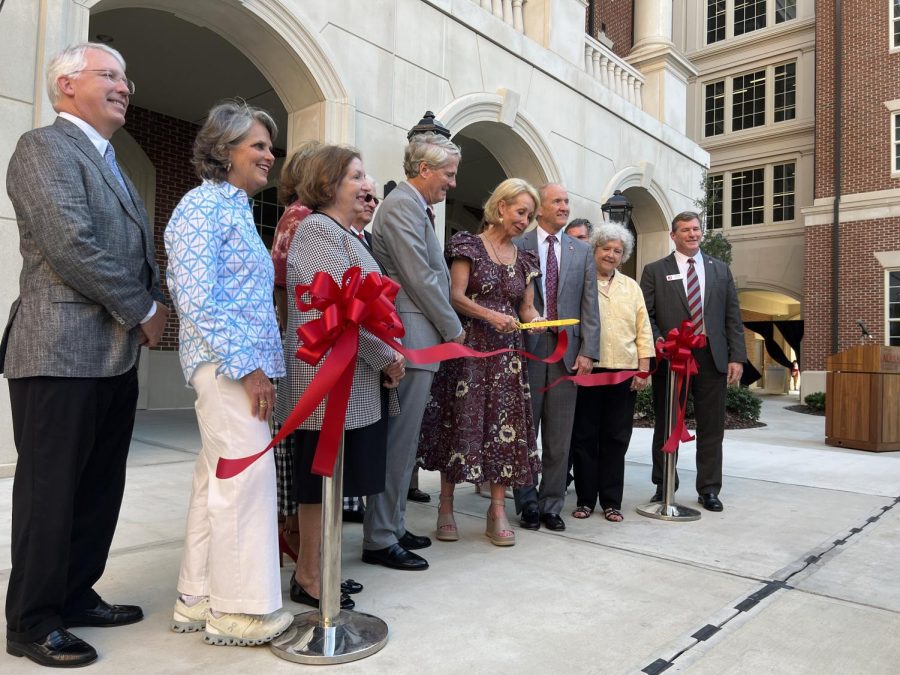 Members of The University of Alabama System board of trustees, UA President Stuart Bell and other members of the University’s leadership cut the ribbon in front of the new Tutwiler residence hall to officially open the building.

“It all came together this summer … it’s come out beautifully,” said Matthew Kerch, the executive director of housing and residential communities. “We’ve heard a lot of positive feedback from the students, they love the rooms, they love having their own bathroom in their room with their roommate. The students really enjoy the building.”

Bell opened the ceremony, held in front of the main entrance, with jokes that received laughs from the audience.

“I would ask ‘how many people in the audience lived in Tutwiler — in the old Tutwiler. I mean, I’m tired of seeing so many guys raise their hands,” Bell said, prompting laughter in the audience. “No, you didn’t live there, you may have been there more often than you’re supposed to.”

“Tutwiler is certainly the home of many leaders,” Bell added.

One such leader was Trustee Karen Brooks, who, according to Bell, was in the first group of freshmen to live in the second building to bear Julia Tutwiler’s name in 1968. Over 50,000 people lived in the old building between then and the building’s demolition earlier this summer.

Bell said that the opening of the hall marked “the beginning of an exciting new era for female freshman students at The University of Alabama.”

“These transformed spaces exemplify The Capstone, not only for what we stand for, but what we instill in every graduate of our institution,” said Madeline Martin, the president of the Student Government Association, in her remarks.

Like Bell, Martin took a moment to joke about the old Tutwiler, saying that she would be “lying” if she said she wasn’t jealous that she didn’t get to live in the new building.

Brooks, formerly the president pro tempore of the board of trustees, also addressed the audience, expressing “what a great experience” it was to be able to live in the old Tutwiler during her freshman year.

“To this day, can you believe, I can name every person on my hall,” Brooks said. “This was my new family.”

Brooks said that the thing that made her “teary eyed” in the run-up to the ceremony was the fact that her granddaughter is now part of the first group of freshmen to live in the new Tutwiler.

Brooks also gave recognition to Julia Tutwiler, the namesake of Tutwiler Hall and a prison and education reform advocate in the last half of the 19th century.

“I can’t just brush by Julia Tutwiler, she was such a trailblazer,” Brooks said. “She really put Alabama on the map as far as education, particularly for women — we are proud to have her name on this campus.”

Steven Hood, the interim vice president for student life, started his remarks by jokingly referring to Bell’s joke, saying “I never lived in Tutwiler, like some of those folks who you questioned if they lived there.”

“But let me assure you that this project is very near and dear to my heart,” Hood continued, adding that Tutwiler Hall will continue to create memories like those experienced by Brooks and Martin.

Now that the new Tutwiler is complete, both Bell and Kerch said that time would be taken to evaluate “next steps,” as enrollment numbers at the University have continued to hit record highs, and as demand for on-campus housing has outpaced supply.

“We will continue to make sure that we’re always able to accommodate those students on our campus,” Bell said after the ceremony.