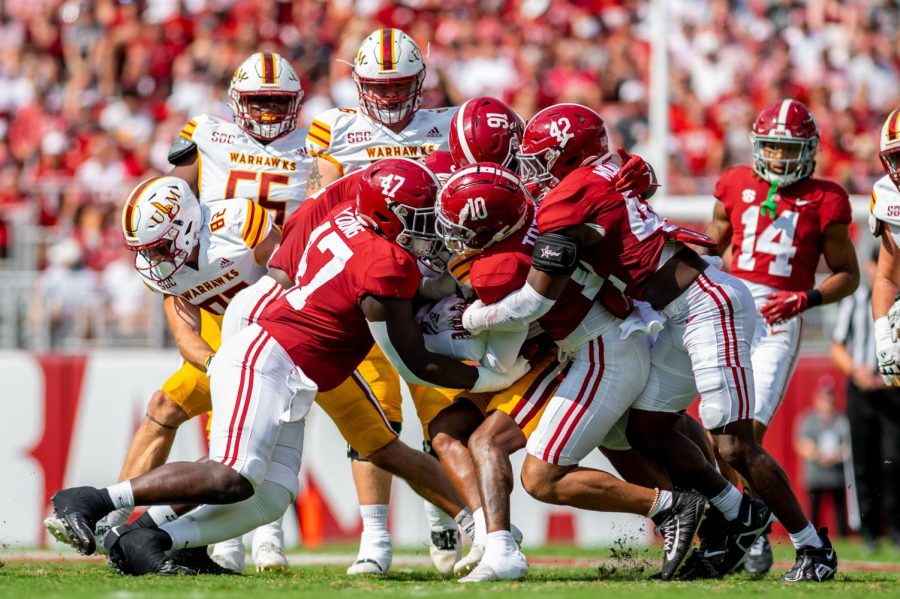 The Alabama defense suffocates the ballcarrier in the Crimson Tide's 63-7 victory over the UL Monroe Warhawks on Sept. 17 at Bryant-Denny Stadium in Tuscaloosa, Ala.

After a chaotic win a week ago, the Alabama Crimson Tide went back to its usual result — smashing the opponent.

The University of Louisiana Monroe Warhawks were the unlucky visitor to Bryant-Denny Stadium on Saturday afternoon, as the Crimson Tide (3-0) rolled to a 63-7 win to remain undefeated on the young season.

“Obviously, a lot of good things out there today,” head coach Nick Saban said. “All in all, I think we made some progress. There’s some evidence out there that this is the standard that we want to play to. I think everybody’s got to judge what we need to do to continue to improve. SEC play next week — it’s going to take a little better effort on everybody’s part to play with consistency.”

Alabama jumped on the Warhawks (1-2) fast. It only took 1:48 for the Crimson Tide to strike first — and only one quarter to attain a 28-0 advantage.

Many fans remember when Alabama scored 15 non-offensive touchdowns in 2016-17. After not forcing a single turnover in its first two contests, the Crimson Tide defense came ready to deliver big plays on Saturday. First was a pick six from linebacker Will Anderson Jr. Just over two minutes later, wide receiver Ja’Corey Brooks blocked a punt and defensive back Malachi Moore was on the other end of it to walk it into the end zone.

Anderson’s fellow linebacker, Henry To’oTo’o, was proud of his teammate.

“Definitely super proud of him,” To’oTo’o said. “We prepared really well, and he knew the play that was coming so that was definitely a huge play for us to gain momentum.”

Cornerback Kool-Aid McKinstry kept it simple in his evaluation.

After the fast start, Alabama was very unimpressive offensively at times in the first half. Quarterback Bryce Young threw his first and second interceptions of the season. The running game was still nonexistent at times for the Crimson Tide. And on top of that, Alabama picked up six more penalties to add to last week’s 15 flags.

The second half was a different story. Along with draining most of the clock, the Crimson Tide ran and ran some more against a worn-out UL-Monroe defense. Roydell Williams and Jase McClellan came off the bench to combine for 105 yards and a touchdown. Alabama finished the contest with 273 yards rushing.

“We made some plays on offense,” Saban said. “Started a little slow but got better as it went.”

The defense did a stellar job of rushing the quarterback. Four different players took part in the Crimson Tide’s four sacks. Alabama stuffed the Warhawks’ running game all day long, holding UL-Monroe to 78 yards on 40 attempts. That’s an average of 1.95 yards per carry.

Special teams were the strongest piece of the puzzle for the Crimson Tide on Saturday afternoon. Going along with the punt block touchdown, McKinstry was a menace in the punt return game. McKinstry showed his athleticism and play-making ability every time he touched the football, racking up 136 yards on five returns. Brian Branch got an opportunity in the fourth quarter and ran it back 68 yards for a score. The 262 total punt return yards for the Crimson Tide set an all-time program record. On Alabama’s lone kick return of the game, Jahmyr Gibbs returned it 57 yards to put the Crimson Tide in Warhawks territory.

“To this point in the season, we’ve not made one explosive play or significant play in the game on special teams,” Saban said. “We weren’t making special teams an advantage to us. Today the execution was a lot better, and we were able to take advantage of it.”

Gibbs also remains Alabama’s main target in the passing game. He led the Crimson Tide with four receptions for 65 yards.

“He’s [Gibbs] definitely a guy that’s a really good playmaker,” Saban said. Especially when he gets the ball in space. I think Bryce [Young] has a lot of confidence in him. He’s an explosive guy, and we need as many weapons as possible on offense and he’s certainly been one of the most consistent weapons we’ve had to this point.”

Oddly enough, UL-Monroe owned the football for the majority of the game. The Warhawks held possession for 36:23 of the 60 minutes of action. UL-Monroe took 64 total snaps to Alabama’s 59.

Even with the blowout victory, the Crimson Tide has plenty to work on with conference play beginning next week. A date in Fayetteville against No. 10 Arkansas awaits Alabama in two weeks’ time.

Before that clash, the Crimson Tide will host the Vanderbilt Commodores (3-1) in its SEC opener on Saturday, Sept. 24. Kickoff is set for 6:30 p.m. CT on the SEC Network.

“Any SEC team is a hard opponent, so another great week of preparation — we got a long road of SEC games coming along,” To’oTo’o said. “So just taking it week by week, day by day, and trusting in coach’s process to prepare the best we can.”